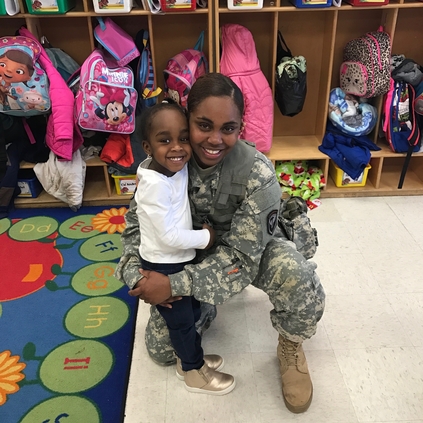 I wanted to show my daughter that education is important, and even though I hit some detours, I went back and finished up.

My name is Marcy Kennedy. I will be 28 years old when I walk across the stage to graduate.

I am also the mother of a 4-year-old princess named Mia. I started working toward my undergraduate degree at Rutgers in 2011, but had to put my education on hold when I found out that I would become a mom in 2013. I returned in 2015, feeling inspired to show my daughter the importance of getting an education. I wanted her to know that even though I had hit some detours, I went back and finished up.

I want to be a hero to my daughter in all aspects of life. I had plenty of long days and nights as a mother working full-time, going to school full-time, and being a member of the NJ Army National Guard. My family and friends firmly supported my journey to finish my education. I'm so grateful for the many nights they volunteered to watch Mia so I could take a night class.

I chose psychology as my major because I've always wanted to help people. I want to be a psychologist and help veterans suffering from Post-Traumatic Stress Disorder. I want to give back to my fellow veterans because, unfortunately, not everyone comes home from overseas in the same condition in which they leave. .

Long term I want to obtain my doctorate,  open a counseling practice, and work as a psychologist for the VA Hospitals in my area.

It has not hit me yet that I'm graduating. But I know that when I do put on my cap and gown, I'm going to be elated.