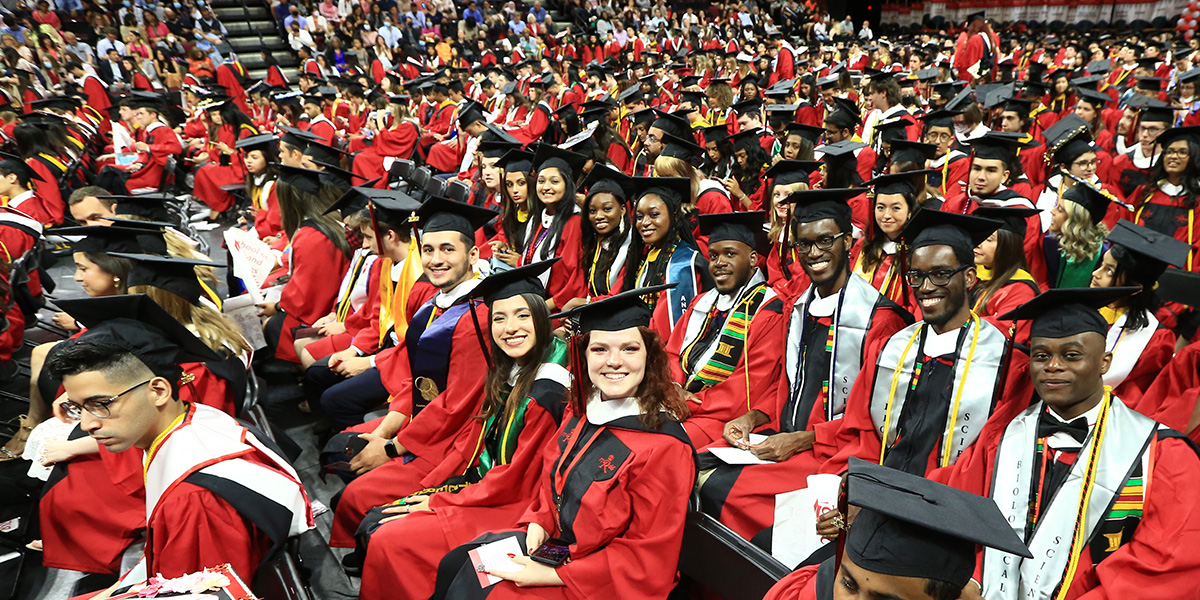 The Jersey Mike’s Arena has seen its share of big crowds over the years for Rutgers University sports events.

But on Tuesday, the Livingston Campus venue formally known as the Rutgers Athletic Center hosted three packed houses in the span of just 12 hours as Rutgers’ largest and most comprehensive school celebrated its graduating class.

The School of Arts and Sciences held three standalone convocation ceremonies May 17 for the Class of 2022, drawing scores of students who occupied every seat on the floor before walking across the stage to shake hands with a dean while their families cheered from the packed-to-capacity stands.

The mood was particularly poignant as the ceremonies were the first spring SAS convocations since the Covid19 pandemic forced the postponement of the 2020 and 2021 gatherings. Those graduates returned for two days of events last October.

“After two years of virtual spring convocations, today we celebrate together,” SAS Executive Dean Peter March told the crowd. “It is so wonderful to see your faces in front of me and to have your family and friends seated around us.” 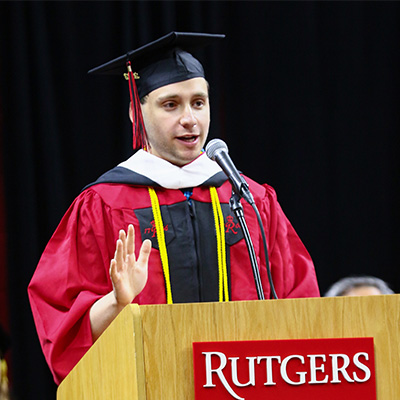 Reid Luftig, the student speaker at the morning ceremony, said students have weathered the crisis and emerged stronger and smarter.

“Despite some seemingly insurmountable circumstances over the past few years, we have all managed to overcome those odds and become the people we were meant to be today,” Luftig, a communication major, said in his speech. “And now as I look out into this crowd of smiling and proud faces, I can confidently say that all of us here have come out of this stronger and smarter than ever before.”

The School of Arts and Sciences previously held its convocations in the SHI Stadium on Busch Campus following University Commencement. The move to standalone convocations at Jersey Mike's Arena took place last fall when SAS welcomed back the classes of ‘20 and ‘21 for their convocations. The response to the change in venue was overwhelmingly favorable, March said. Parents were now close enough to see the expressions on their graduate’s face. They could also hear each student’s name called as they crossed the stage. And there was better view of the scoreboard which showed every student’s name and major.

All told, some 5,119 students graduated SAS, nearly half of whom were eligible for graduation honors. A total of 747 had two majors, and 14 had three majors. The students represented 21 countries besides the United States, and 33 states outside of New Jersey.

The School of Arts and Sciences is the center of undergraduate education at Rutgers–New Brunswick and spans the academic spectrum, from American studies to astrophysics, from classics to computer science, and from philosophy to physics. 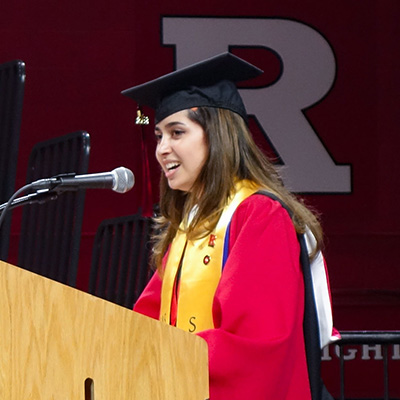 That breadth and depth inspired student speaker Gloria Abbas-Zadeh, an SAS Honors Program student who exemplifies the school’s broad range with her majors in cell biology and neuroscience and French.

Every field, she said during the afternoon and evening convocations, has a connection to the human condition.

“In neuroscience I learned how the human brain and nervous system work, and as a result of this I learned a fundamental way in which humans function,” she said. “But humans are much more complex than their brains are. Through reading French literature, I learned about the secrets of the human heart.”

She concluded by calling on students to remember the human connection in their own fields and to honor that connection by being compassionate.

“So, human connection is the thread which ties us all together, and we really depend on our differences to not only better understand each other, but ourselves as well,” Abbas-Zadeh said. “With this in mind, my fellow graduates, we must remember some key things. To be kind to others.

“We’ve all faced our own challenges these past few years. We can use the memories of these difficulties to be more compassionate towards others. As we progress through life and add to our successes, we have to remember our core values and hold on to them forever.”

pdf Find your name in the Convocation Program! (2.30 MB)