After Covid Kept Them Apart, Rutgers Graduates Come Together to Celebrate Their Moment 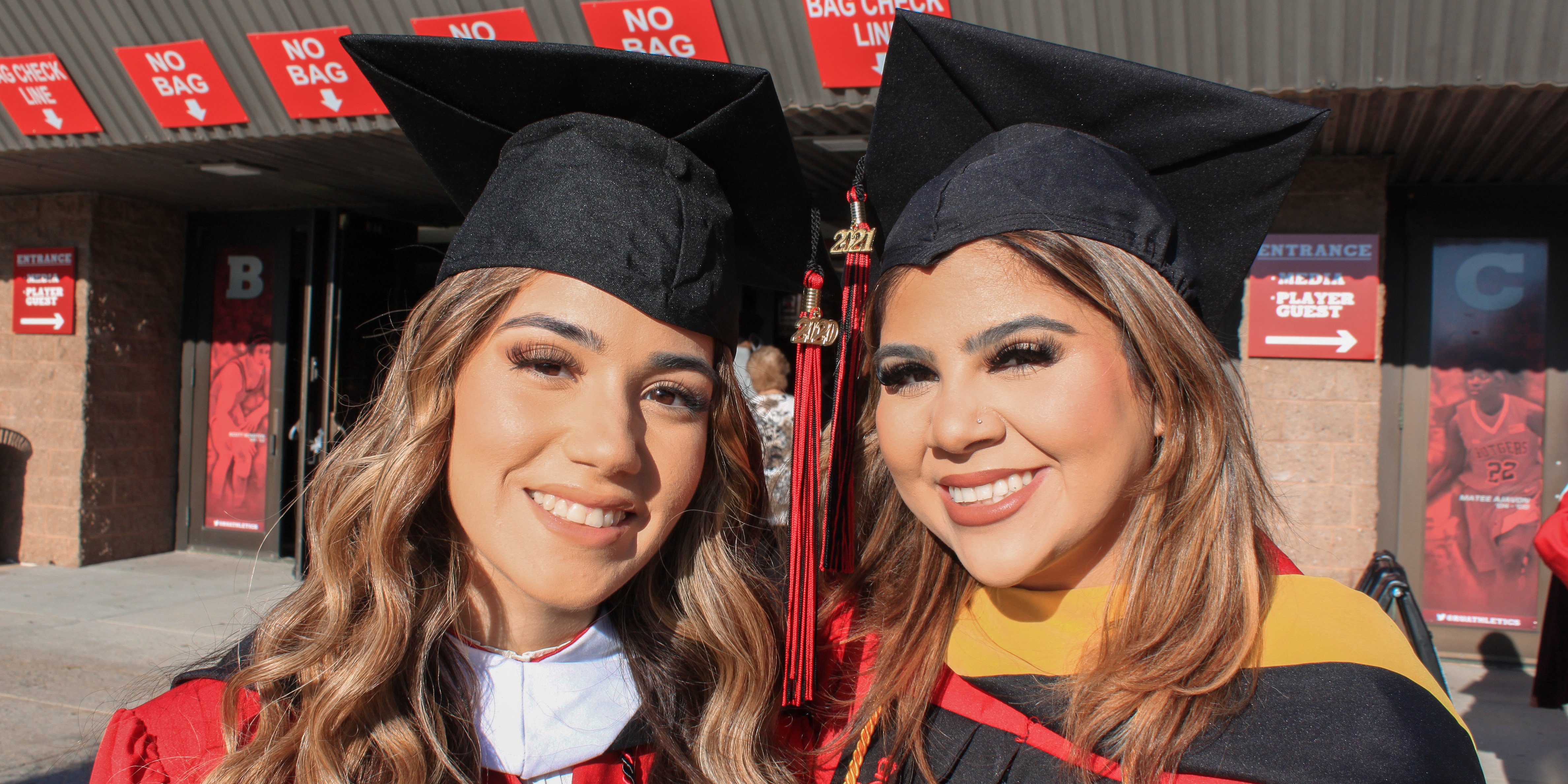 It was late October, but it felt like mid-May at Rutgers.

The sun was out. Parents were strolling around campus.  And a sea of scarlet filled the Rutgers Athletic Center.

Members of the School of Arts and Sciences classes of 2020 and 2021 returned to campus Friday and Saturday to commemorate their graduation, savoring the opportunity to celebrate alongside friends and family after the Covid19 pandemic had foiled plans for in-person gatherings over the last two commencement seasons.

"This was a final chapter that I needed to close," said Tatiana Vega SAS'21. "I received my diploma in the mail but it wasn’t the same as walking across that stage."

Vega, who majored in public health, was joined by her cousin Laila Olivera SAS'20. The two cousins were surrounded by friends and family as they waited in the morning sun to enter the RAC. 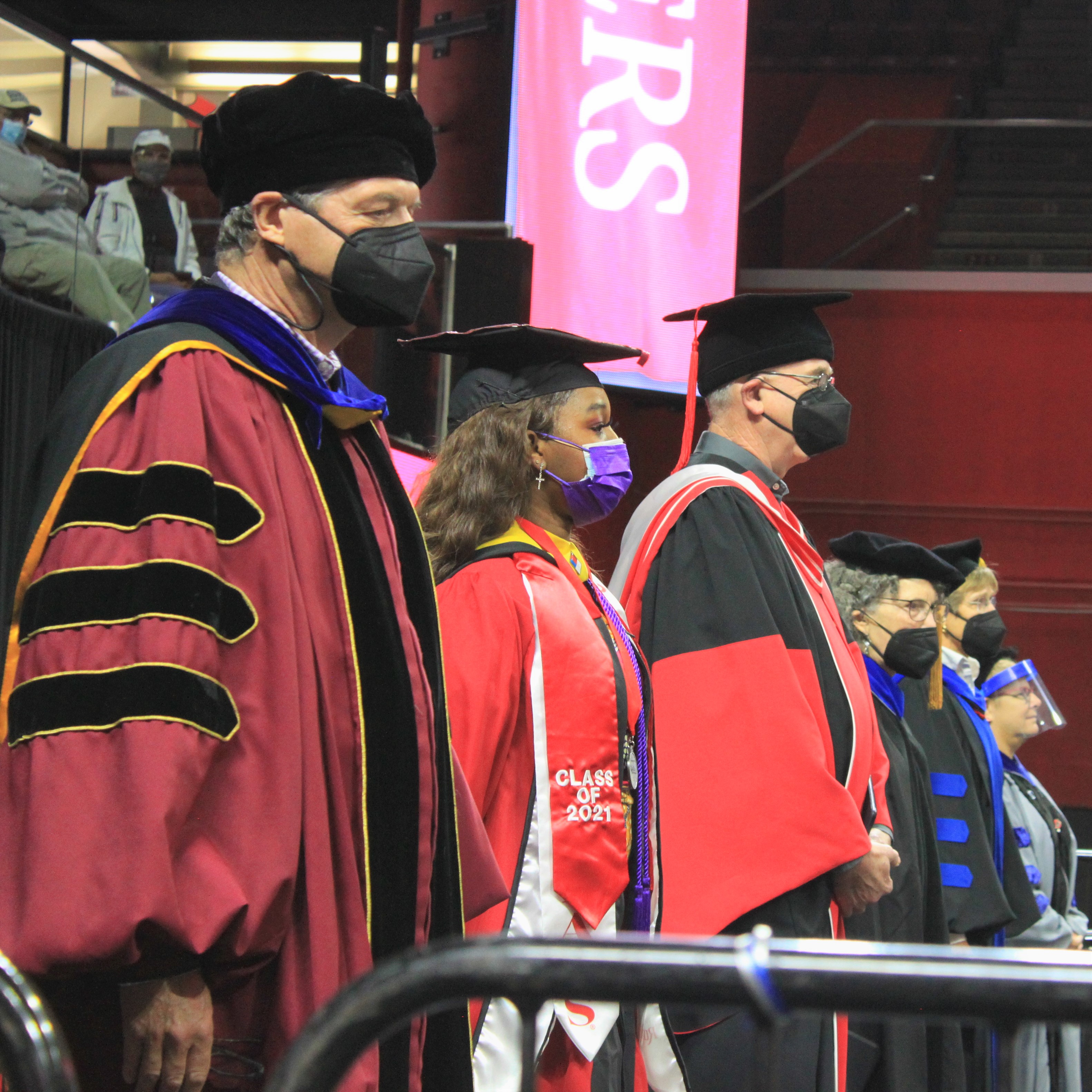 "We are all super excited," said Olivera, who majored in linguistics. "Covid created such a big shift in our lives, and it's just unbelievable and amazing to be able to be here right now with everyone to celebrate this day."

The SAS celebrations Friday and Saturday morning were part of a series of events across Rutgers campuses honoring graduates from 2020 and 2021. They included everything from doctoral hooding ceremonies to an alumni open house at Van Nest Hall to a Snoop Dog concert capping it all off at SHI Stadium Saturday night.

SAS Executive Dean Peter March told the jubilant crowd of SAS graduates and their families inside the RAC that their celebrations were long overdue and well-deserved.

"It’s your time to walk across the stage and bump elbows with a School of Arts and Sciences Dean," he declared. "Your achievement—completing the requirements of a college degree during a global crisis—is historic.” 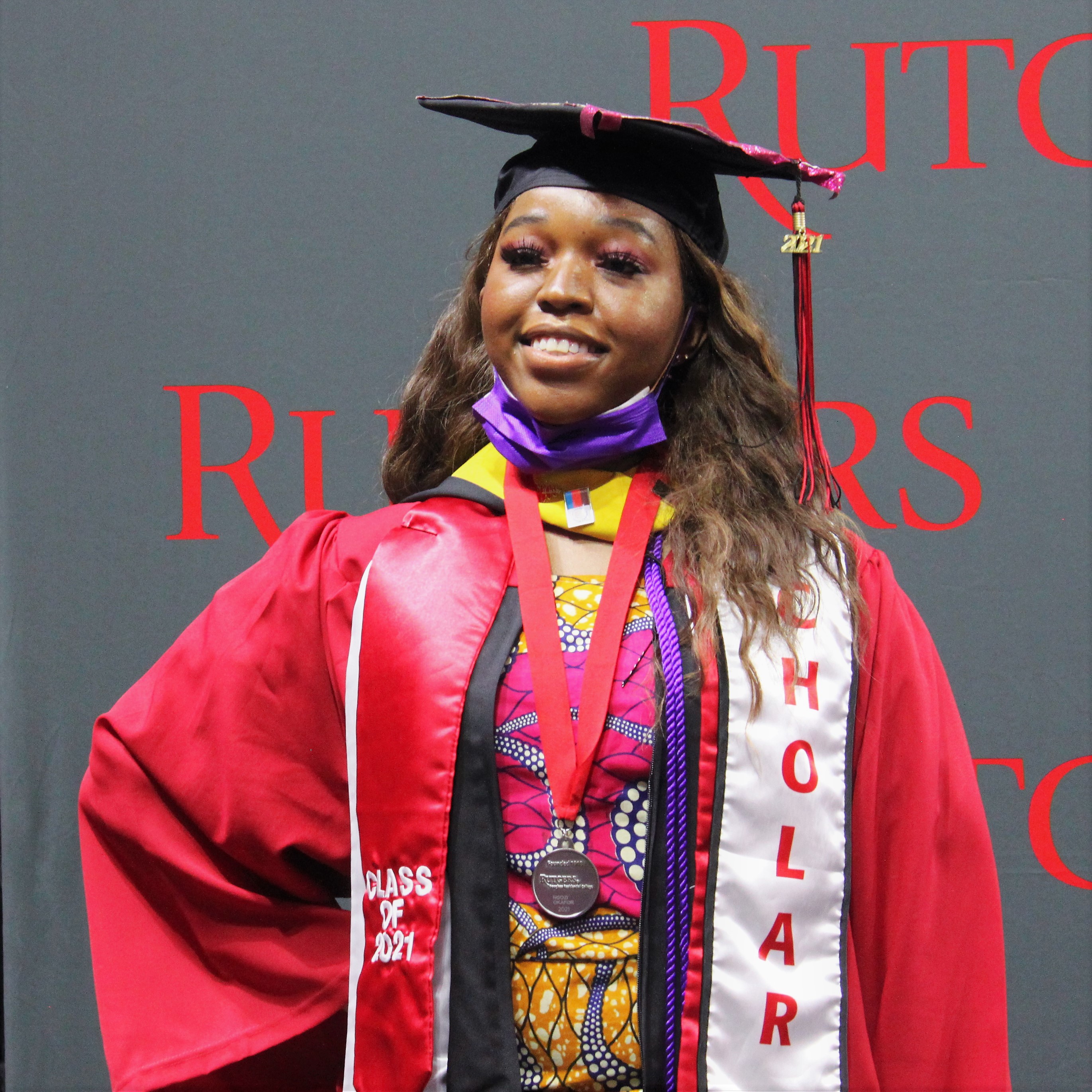 Student keynote speaker Ngozi Okafor spoke of the loss and disorientation many have felt during the pandemic, reminding the audience that as of early October, the number of global Covid19 cases had topped 238 million, including 4 million deaths. In a powerful speech, she called for graduates to recover purpose and meaning in their lives and work for the greater good.

“This pandemic has caused us to be fixated on the storm itself and forget our placement inside of it,” Okafor said. “When we lose sight of our own purpose and identity because of external factors, we lose the vision for our lives and start to internalize limiting beliefs and call them realistic.”

The School of Arts and Sciences typically holds year-end convocations in the stadium following university commencement, giving graduates of Rutgers’ largest and most comprehensive school the opportunity to walk across the stage and receive congratulations from a dean as their name is shown on the big screen. 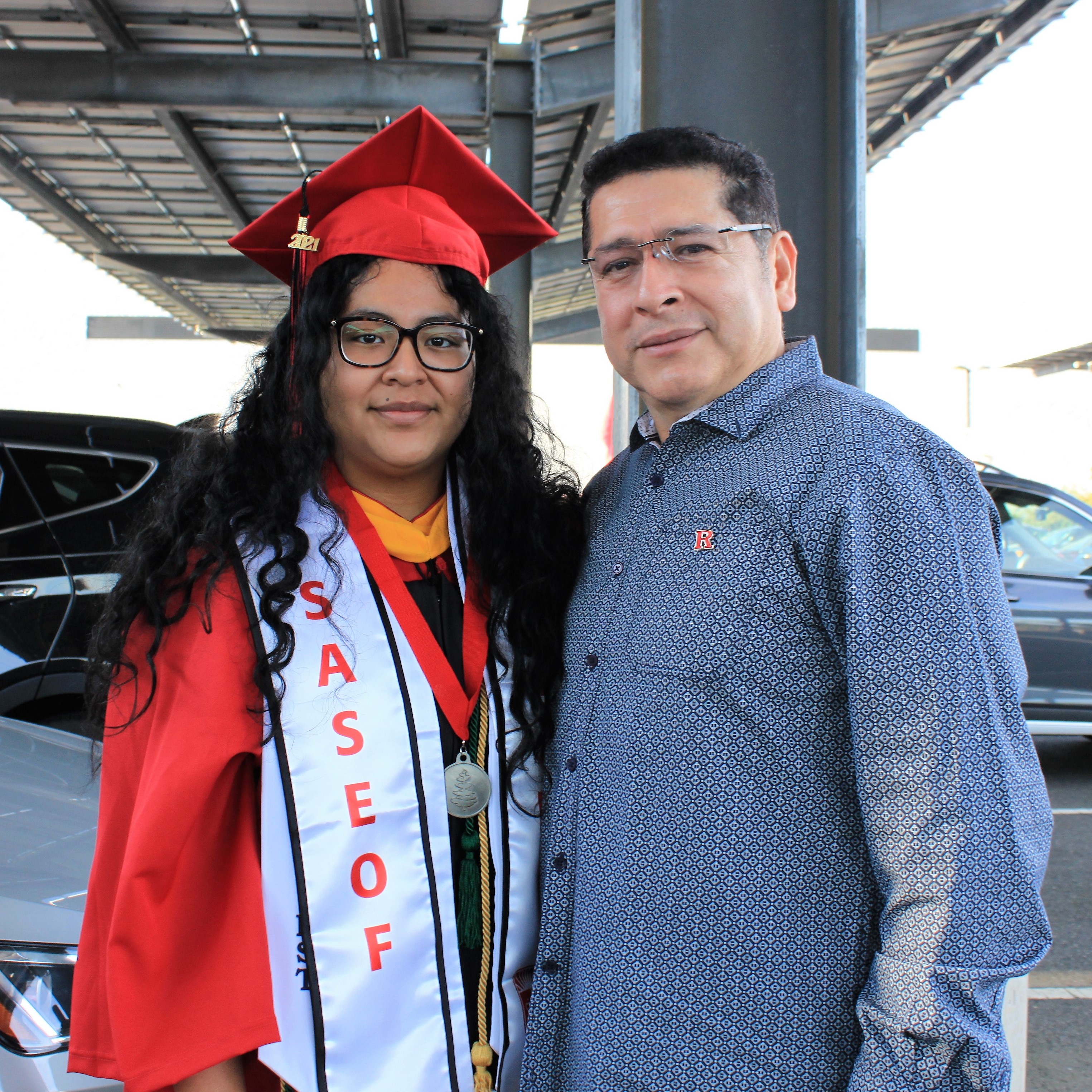 But the school, in compliance with social distancing protocols, has held virtual convocations the last two years, with the executive dean emphasizing themes of resilience, quoting Franklin Delano Roosevelt’s speech to college graduates during the depths of the Great Depression as well as more recent remarks by John Lewis, the late congressman and civil rights leader.

“Our virtual ceremonies in spring of ‘20 and ‘21 were meaningful and inspiring at a time of crisis,” March said to the audience. “But there’s nothing quite like seeing you gathered together today.”

The graduates agreed, adding that the ceremony was particularly poignant for their parents.

"It’s a great feeling for me, but it’s an even better feeling for my father," said Cindy Penafiel SAS'21, who is among the first generation in her family to graduate from college. Her father Alberto drove her from Weehawken for the celebration. 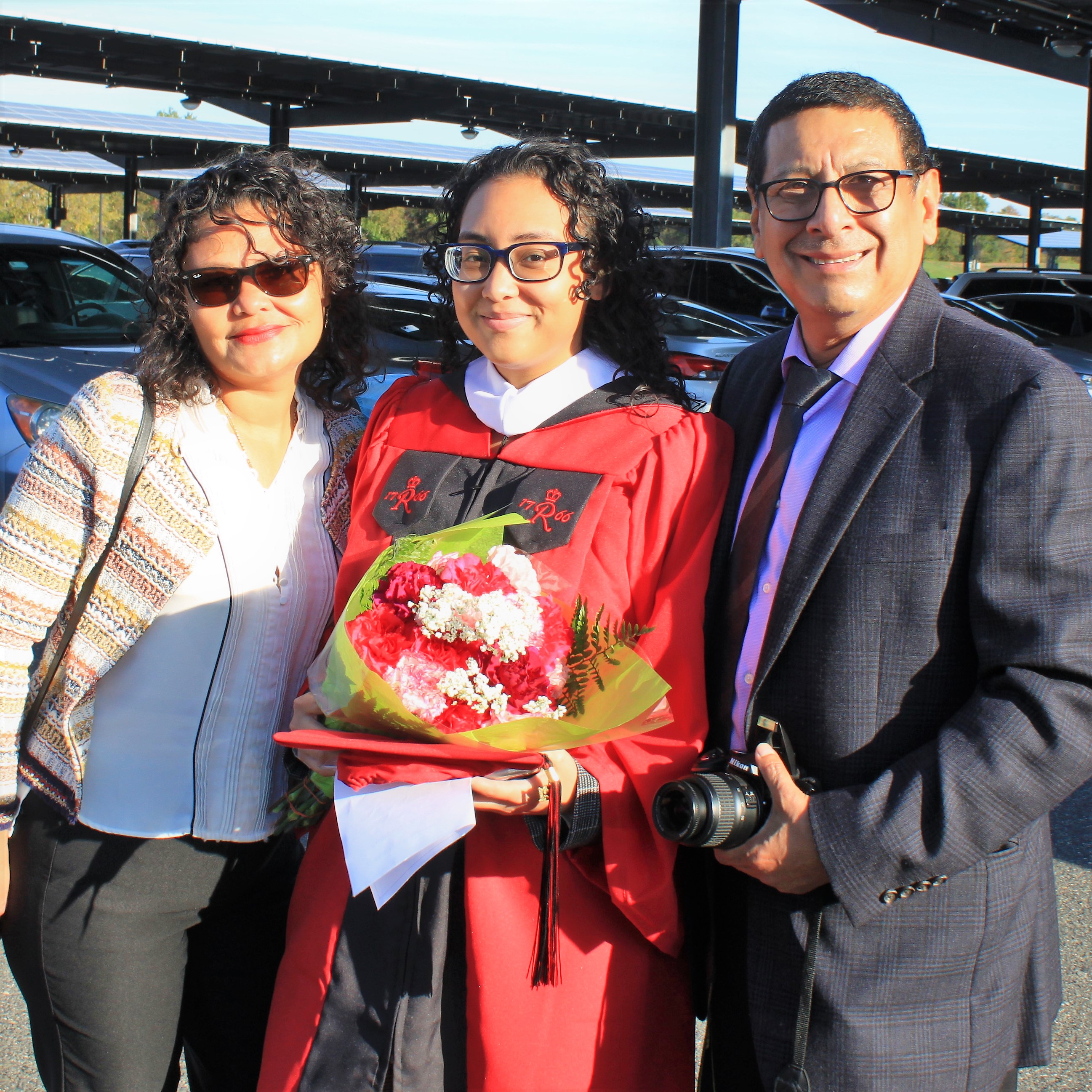 "One of the main things my father always asked of us was to make sure we finish school," she said.

Marlen Herrera SAS'21, a computer science major and a first-generation college student, said her relatives in Honduras were planning to watch the livestream of the celebration.

"Everyone is very excited to see me," she said.

Leone DiCarlo, an information technology and informatics major in the Class of 21, arrived with his parents and grandparents.

"It's not really about myself, it's for these guys," he said. "I want them to know that this accomplishment is because of them."

The graduates said they'll always carry with them the experience of finishing their studies during the pandemic,

And Okafor, the student speaker, closed her speech by telling the audience that their shared experience has prepared them well for a challenging world. 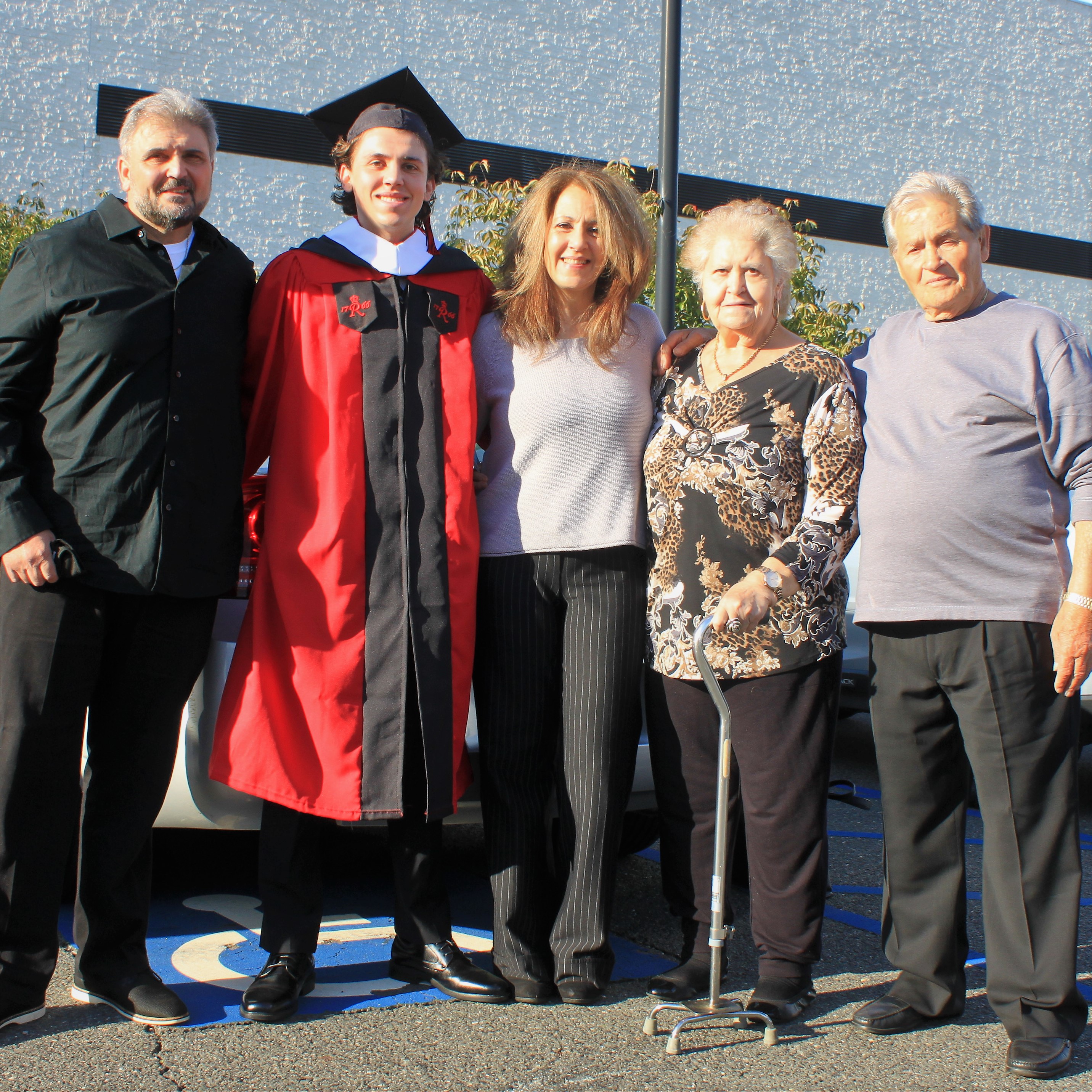 The Maplewood native, who graduated in January, majored in public health and minored in French. She worked on a research project at Rutgers on the impact of Covid19 on maternal and child health.

“We have a unique story that bonds us together,” she said in her speech. “We have experienced our final semesters during a pandemic, virtual learning, and now, an October celebration.

“We are determined, versatile, and encouraged Scarlet Knights. Let’s use this experience to challenge obstacles and embrace life’s unplanned moments.

“This is only the beginning for our vision.”

After completing her speech, the graduates lined up and began ascending to the stage. As they bumped elbows with the deans, the scoreboard screen high above the room captured the encounter and families erupted in cheers.