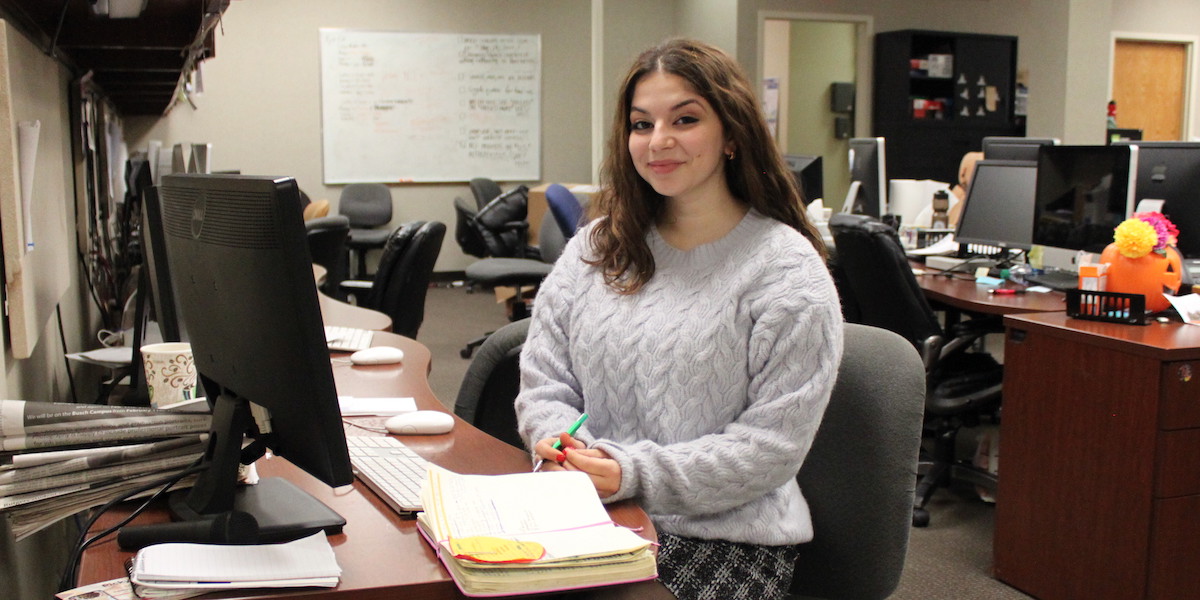 Ameena Qobrtay's double major at Rutgers University puts her on the cusp of contemporary thought while laying the foundation for a career as a writer, scholar, or critic.

A School of Arts and Sciences junior, Qobrtay is majoring in women’s and gender studies, and journalism and media studies. Her work at The Daily Targum shows how those two majors can work together as a singular calling.

“Journalism is my profession, and women’s and gender studies is my passion,” she says. “The two inform one another.”

Journalism is my profession, and women’s and gender studies is my passion

As features editor at the Targum, Qobrtay sets the tone for the buzzy Inside Beat section, where recent stories have included a rundown on newly elected LGBTQ officials, an analysis of how the Harry Styles Vogue cover challenges gender stereotypes, and a profile of Jill Biden.

Qobrtay’s own bylined stories, meanwhile, offer an edgy, feminist take on some of the most talked-about stories, from pop culture to politics. She defended the singer Lizzo against fat shaming, criticized actress Bela Thorne for actions on social media that potentially jeopardized sex workers, and suggested that Democrats are being hypocritical for not taking seriously the accusations against Joe Biden by Tara Reade.

“Women’s and gender studies gives you a framework for looking at the world,” Qobrtay says. “And that definitely shows in my writing.”

The Department of Women’s, Gender, and Sexuality Studies (WGSS) at Rutgers University–New Brunswick was founded in the early 1970s as one of the first programs of its kind in the nation. The faculty is highly interdisciplinary and includes economists, historians, literature scholars, political scientists, and sociologists, among others.

Qobrtay says WGSS courses serve as formative experiences that open her mind to new ideas. One of the first was Julie Rajan’s “Gender, Culture, and Representation” in which she re-read iconic novels like Jane Eyre and Frankenstein with a critical lens. Another was Deepa Kumar’s “Race, Class, Gender and the Media.”

“That completely changed my life,” she says of the latter. “It made me think about everything I see on TV, the Internet or on any form of media and second guess how historically marginalized people are portrayed.”

Qobrtay’s intellectual growth has continued into her junior year. She was accepted into the Leadership Scholars Program, a two-year certificate program run by the Institute for Women’s Leadership. The opening course taught by Charlotte Bunch covered a range of issues including a workshop on emotional literacy.

“If you are aspiring to feminist leadership, you have to do the emotional labor or you are not going to accomplish your goals,” Qobrtay says. “To not be conscious of your emotions is to serve patriarchal interests.”

An added advantage of her majors is community. Even during remote instruction necessitated by COVID-19, Qobrtay got acquainted with fellow students who share her passion for the material, particularly during the course with Bunch.

“In between sessions, we’ll have a group chat or text and talk about how much fun this is,” she said. “I am looking forward to getting socially distanced coffee with one of them.”

As she looks ahead, Qobrtay is becoming increasingly interested in continuing with women’s and gender studies at the graduate level while also pursuing long-form journalism.

“I have learned so much at Rutgers from my department and my professors that it’s actually mind-blowing,” she said. “I feel like I can’t stop with what I know now.”