Remembering a tragic death and a fateful journey in 1870 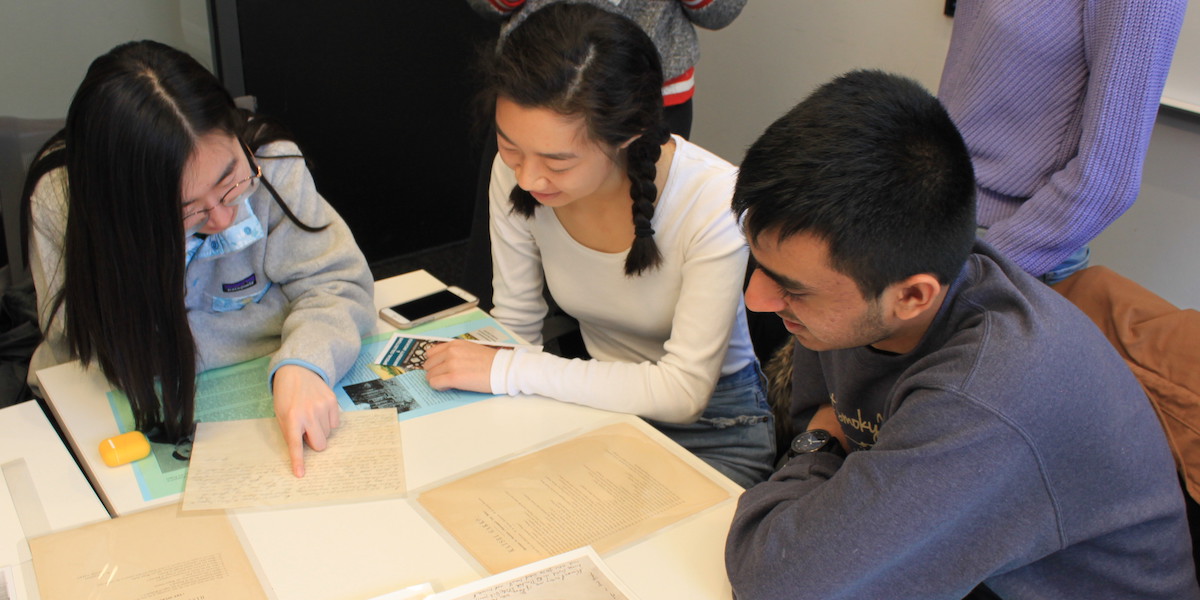 Rutgers is known as a diverse place.

But not everyone knows that the university’s inclusive, globally-engaged culture was developing as early as the 1860s, when Rutgers became one of the first American colleges to enroll Japanese nationals. 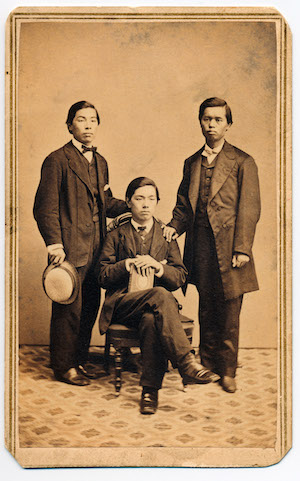 And few today know the tragic tale of how the first of those students—a brilliant samurai named Kusakabe Taro—died from tuberculosis weeks before his graduation in 1870 and was buried in New Brunswick after a funeral service hosted by the Rutgers president.

Later that same year, Kusakabe’s fellow Rutgers student, friend, and tutor—William E. Griffis—accepted an offer to teach in what is now Fukui, Japan. He went on to become an influential figure in Japan’s modernization, and a renowned writer, lecturer, and scholar of Japan.

Over the last semester, Rutgers students in an undergraduate honors seminar have been studying these historic events. And last week they discussed their work during a joint video conference with students at the University of Fukui who are also learning about the legacy of Griffis.

“We are breaking new ground here,” Ryuhei Hosoya, a professor at Fukui told both groups of students. “The first joint class here online between the two universities.”

The conference ended a semester that was supposed to include several major events to mark the 150th anniversary of Kusakabe’s death and Griffis’ journey. But those plans were put on hold after the onset of the COVID-19 pandemic.

The students taking the seminar had been looking forward to making a two-week visit to Japan this month and attending a symposium at the University of Fukui titled: “Griffis’ Fukui: 150 Years On.” And the Rutgers School of Arts and Sciences had been planning to host a symposium in March titled “Rutgers Meets Japan: Foreign Teachers, Missionaries, and Overseas Students in the Early Meiji Era.” 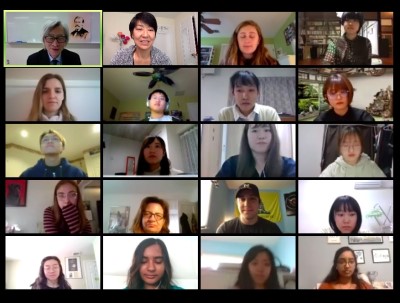 Haruko Wakabayashi, a professor in the Department of Asian Languages and Cultures, is hoping the trip and the symposium can take place in the 2020-2021 academic year. She said the story of Rutgers’ early encounters with Japan offers enduring lessons for the university community and the public. And there is a wealth of university resources documenting those connections, including The William E. Griffis Collection in the Special Collections and University Archives, Alexander Library.

“The story of Kusakabe and Griffis is a great example of how people from very different cultures met and learned to appreciate each other,” Wakabayashi says, “And it’s worth remembering that just a few years after the Civil War, Rutgers is accepting Japanese students, and in fact, educating the future leaders of Japan.”

Hosoya, the professor at Fukui, agreed.

“William Griffis laid the foundations of education in Fukui as well as for the whole of Japan,” Hosoya says. 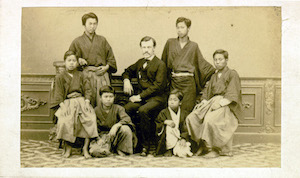 “Once I realized Rutgers had such a long relationship with Japan, I just had to take this class,” says Evan Feldman, a sophomore in the SAS Honors Program majoring in computer science and economics. “This is very outside of my main fields of study and it’s like a breath of fresh air.”

Aishwarya Sridhar, an honors program junior majoring in cell biology and neuroscience, hopes one day to go to medical school and work in another country.

“I really wanted to learn about another culture,” she said. “And this class is completely eye-opening!”

Their research left the Fukui students impressed. Tanaka Miori told a Fukui newspaper: “It was very meaningful having an exchange among people who were drawn to Griffis.  I would like to learn from the research done by Rutgers students.” 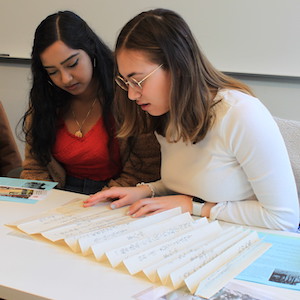 Before the conference ended, the two groups of students agreed to collaborate on a project —a Fukui Google map created by one of the Rutgers students, Shannon Hiner, that is part of the online exhibition.

The connection between what was then Rutgers College and Japan goes back to the college’s roots in the Reformed Church in America. Christian missionaries in Japan encouraged Japanese students to study at Rutgers.

From the late 1860s to 1912, as many as 200 Japanese students came to New Brunswick, most of them to Rutgers Grammar School (later Rutgers Preparatory School), and, if successful, to Rutgers College. The students came during what is known as the Meiji era in Japan when the country began moving from an isolated feudal society to a modern industrialized nation.

Kusakabe Taro became the first to attend Rutgers College. He studied mathematics and physics as well as humanities subjects such as Latin and English. He excelled in all. He died on April 13, 1870 and is buried in Willow Grove Cemetery. He was 25, and posthumously awarded his bachelor’s degree and Phi Beta Kappa key.

“He was number one in the Class of 1870,” Fernanda Perrone, curator of the Griffis collection, Special Collections and University Archives, told students during a recent session of the seminar. “Which is really amazing.”

Griffis, meanwhile, arrived in Japan in early 1871, teaching English and science at a local school and later relocated to Tokyo. He visited Kusakabe’s father, and presented the deceased student’s Phi Betta Kappa key. Griffis returned to the U. S. in 1874 and embarked on a 50-year career preaching, lecturing, and writing.

In the following decades, a number of Rutgers graduates as well as a professor, David Murray, visited Japan and exerted a modernizing influence on the educational system. Some came as missionaries and started schools. Murray served as an advisor to the Japanese government.

“There are so many dimensions to this,” says Paul Schalow, Chair of the Department of Asian Languages and Cultures. “And it started with that early welcoming spirit at Rutgers.” 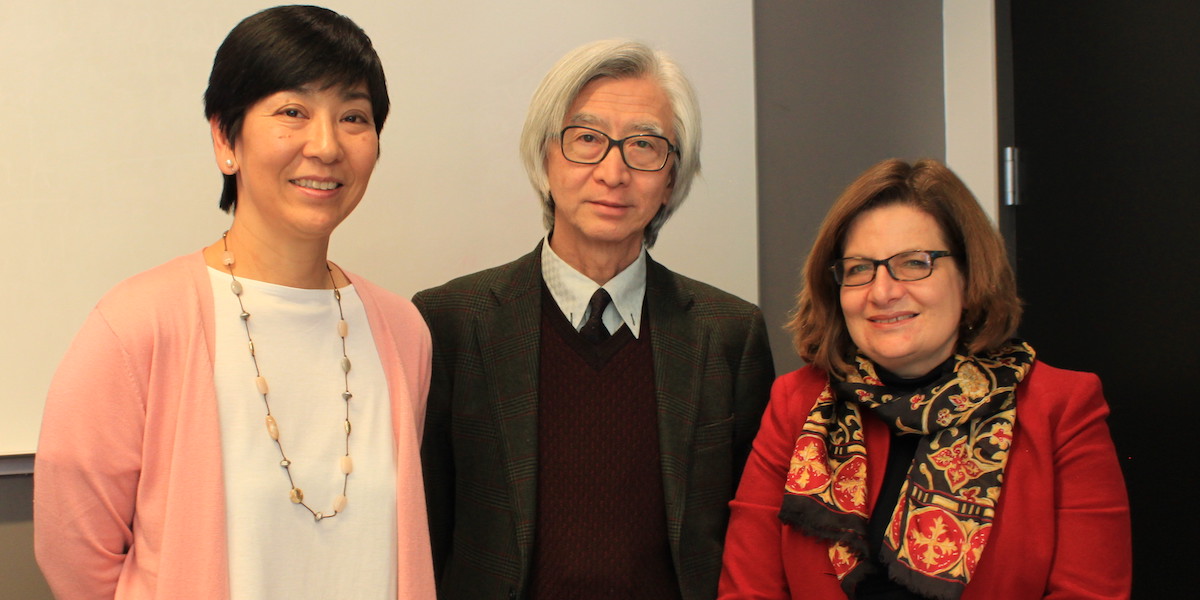