School of Arts and Sciences Celebrates Class of 2019 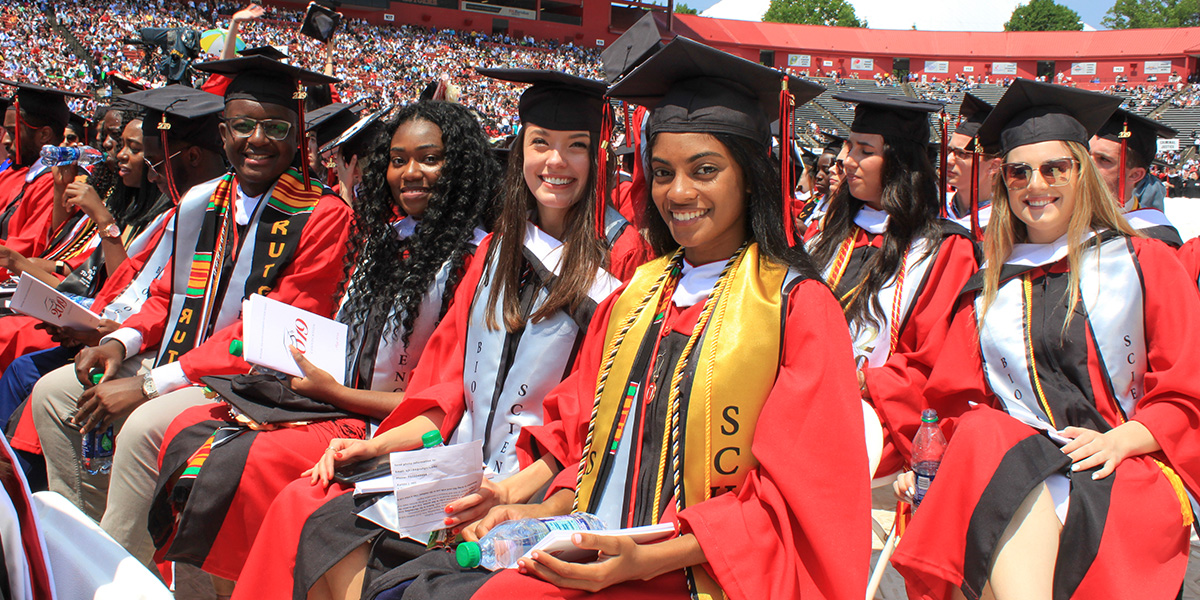 They traveled great distances—including from India and Central America—to watch their loved ones ascend to the stage and shake hands with deans and faculty. 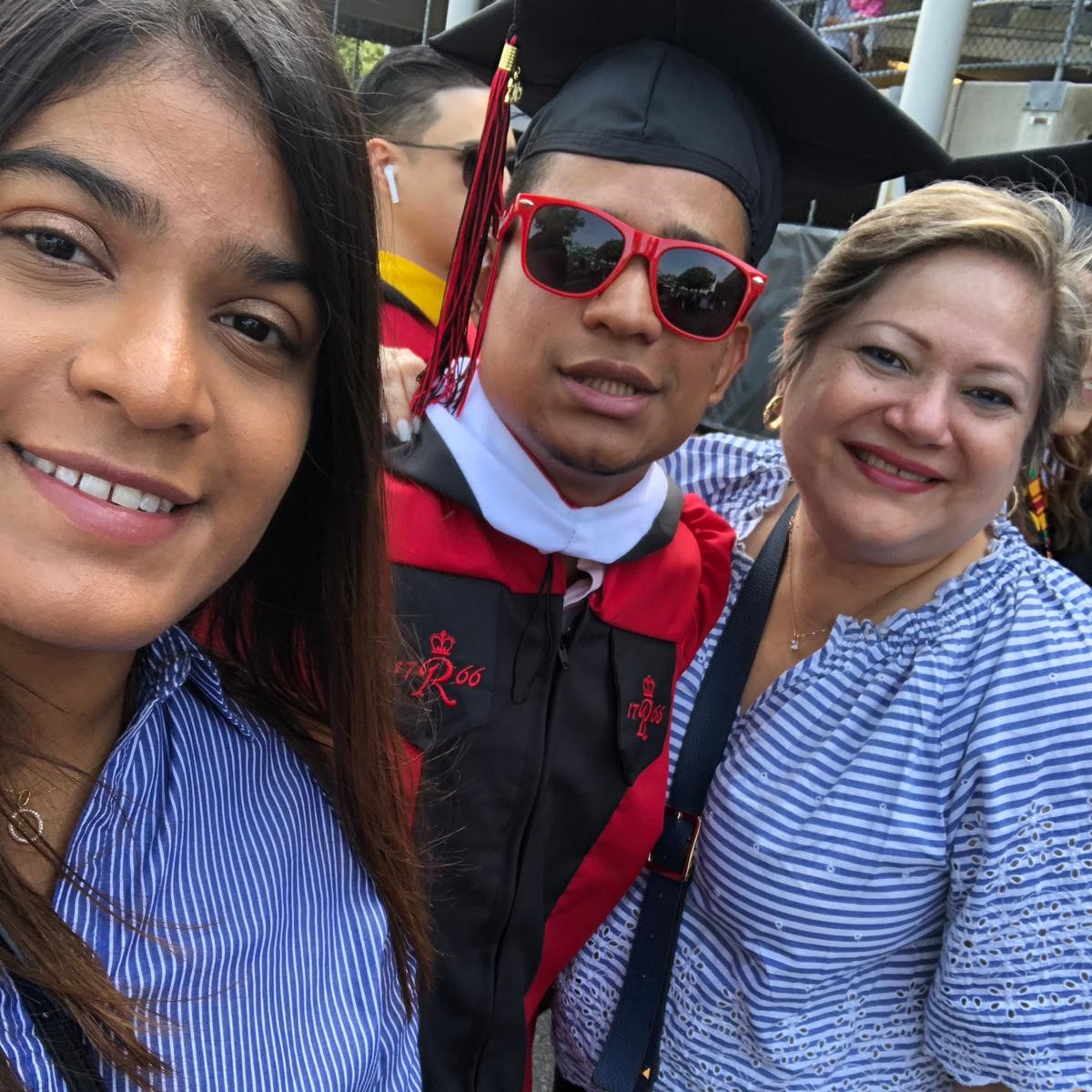 Gina Jereda left her home in Honduras, flying to Miami and then to Newark to see her nephew, Irvin D. Mayorquin, a political science major, at the May 19 Rutgers School of Arts and Sciences Convocation at High Point Solutions Stadium.

“I was going to come to New Jersey for Christmas, and then my nephew told me he was graduating from Rutgers in May,” Jereda said. “I decided right then and there I would cancel my Christmas visit so I could come today.”

Though it certainly wasn’t Christmas, with blazing sun and temperature rising to the mid-80s, the experience of coming to convocation felt like a great gift, Jereda said. She was overcome by emotion as the graduates began filing onto the field, led by marshals carrying the teal, white, and red banners of the school’s academic departments.

“Oh my God, this is wonderful,” she said. 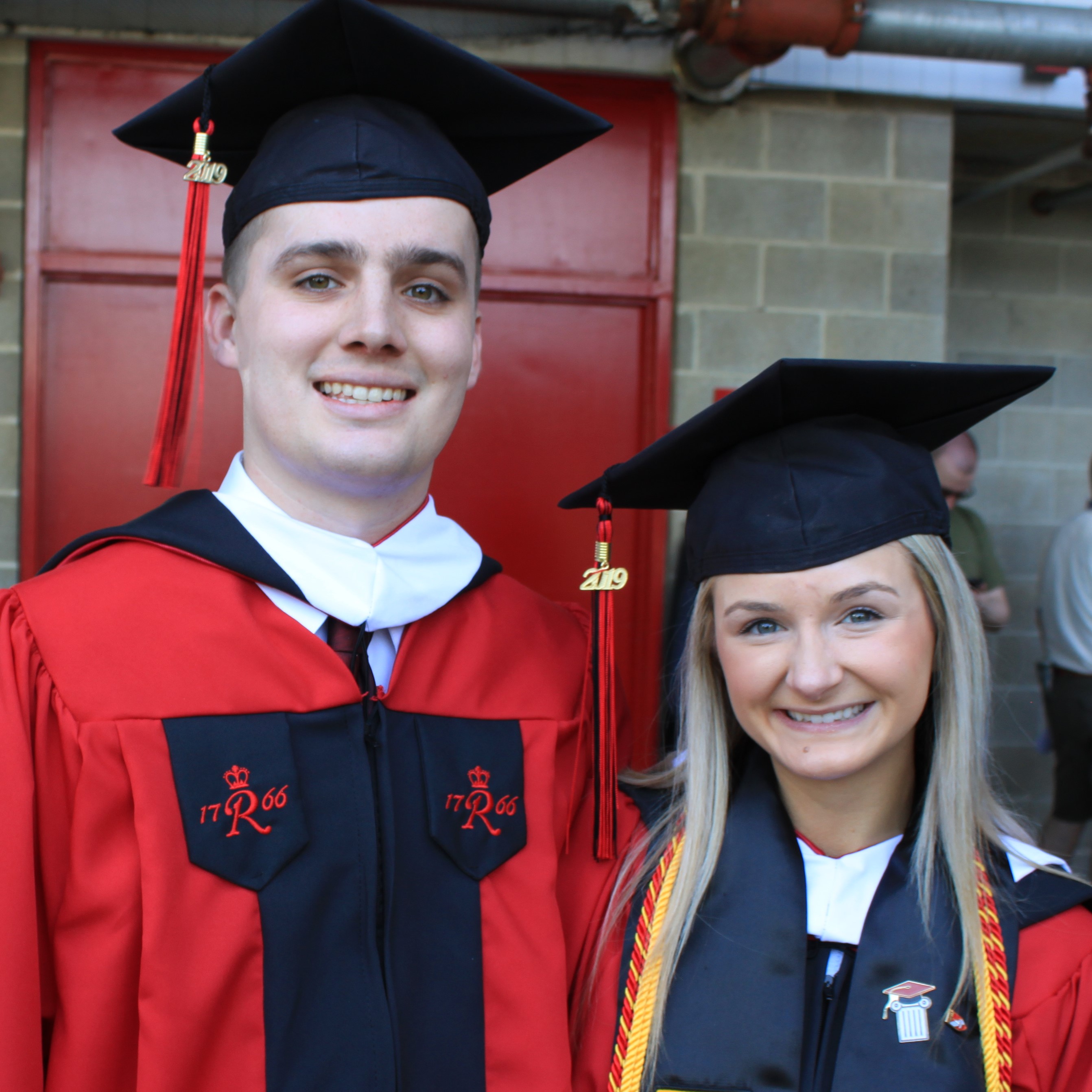 Jereda was among thousands of people who filled the stadium to cheer on graduates of Rutgers University’s largest and most comprehensive school. The School of Arts and Sciences in 2019 graduated some 5,499 students in fields across the life sciences, humanities, mathematical and physical sciences and social and behavioral sciences. More than 1,600 graduated with a 3.5 grade point average or higher, and 63 with a 4.0.

“Rutgers taught me how to think,” said Omar Tamimi, a philosophy major from Toms River who is planning on going to law school. “Knowing how to think through problems is crucial because our world is in need of some serious problem-solving.”

Similarly, Katie Bauer, of Basking Ridge, said her American studies major with its small classes and round table discussions has equipped her well for a complex, challenging world.

“It’s nice to be knowledgeable, to have an opinion, and to be able to back up my opinion,” she said. 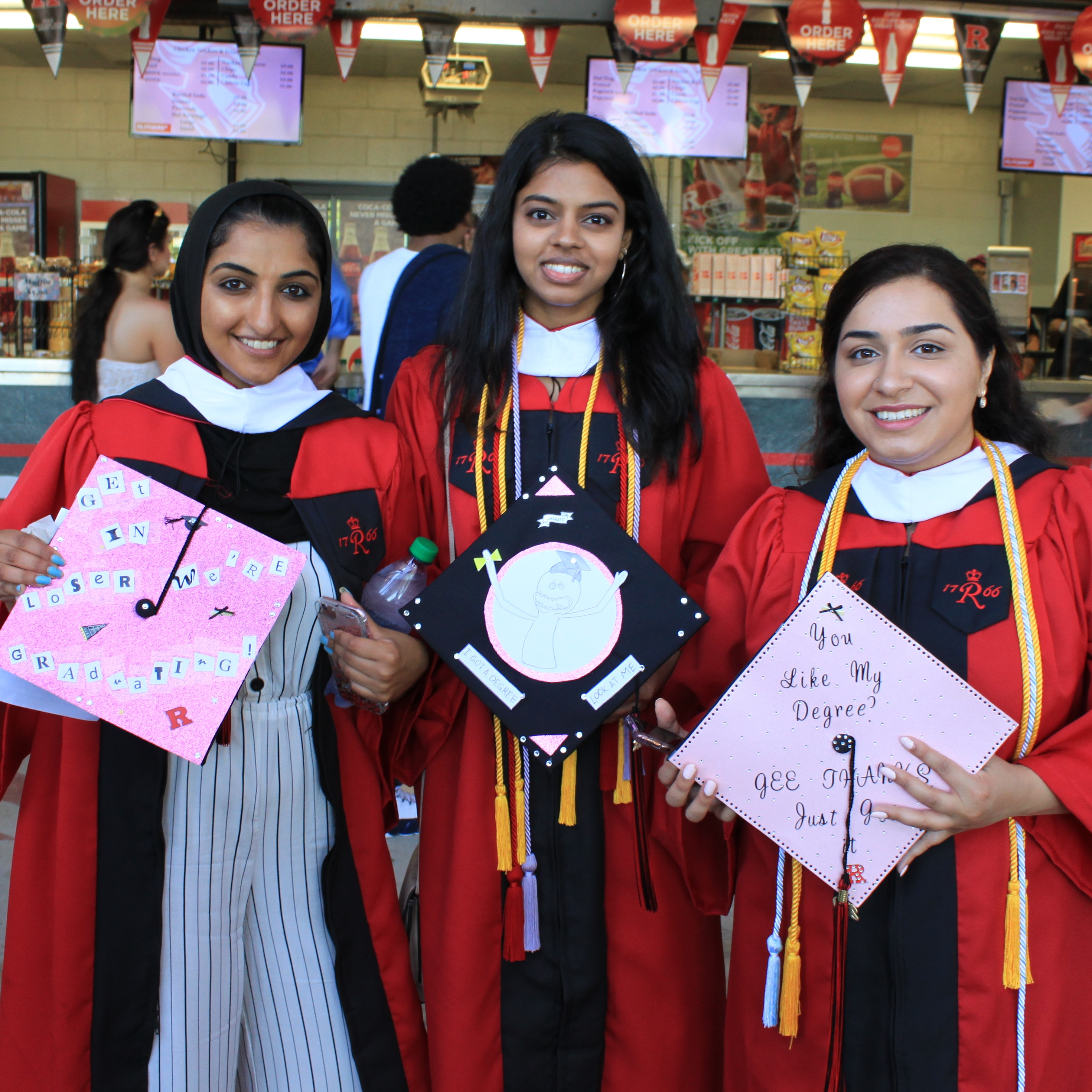 Meanwhile, Likhita Nallapati, a biological sciences major, says she will be attending Ross University School of Medicine in Barbados.

“I am thinking about cardiology,” she said.

Graduates said the influence of Rutgers will be enduring.

“The experiences I had at Rutgers—the friends, the academics, the overall social experience—I don’t think I could have gotten anywhere else,” said Hirra Muzaffar, an information technology major who is going to work for Johnson & Johnson.

The Convocation, now in its fifth year, takes place just after the conclusion of University Commencement and has become a much-loved tradition that provides family and friends a chance to watch the graduates on the big screen and see their names flash on the ribbon screen that circles the stadium. More than 2,300 students walked across the stage—a new record. 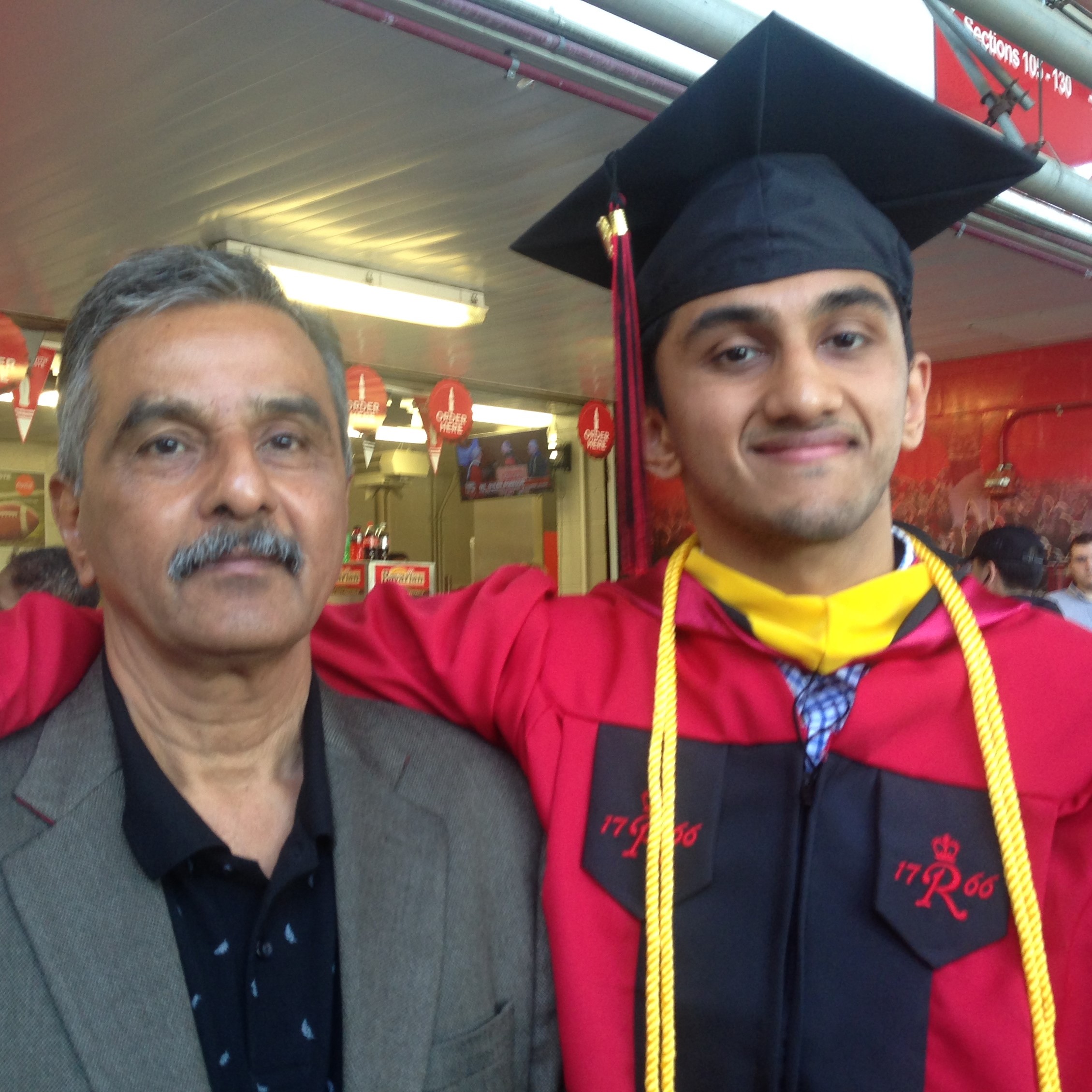 “We would have come from anywhere so see this,” said Raymond Dovell, a Moorestown resident whose son, Thomas, majored in sport management and is currently interviewing for a position at a major league sports franchise in Philadelphia.

“My son wanted to play soccer for Rutgers since he was 10, and last year he was captain of the team,” Dovell said. “He had an incredible experience at Rutgers.”

One dad, Sastry Mantravadi, arrived earlier in the week from India, excited to see his son, Aravind, who majored in computer science and will be pursuing a graduate degree in data science.

“He came here four years ago as a boy,” Mantravadi said. “Now he’s leaving as a man.”

Aravind, for his part, said Convocation was the most eagerly-anticipated part of the day. "I spent four years here studying computer science and now I am going to celebrate with my friends,” he said. 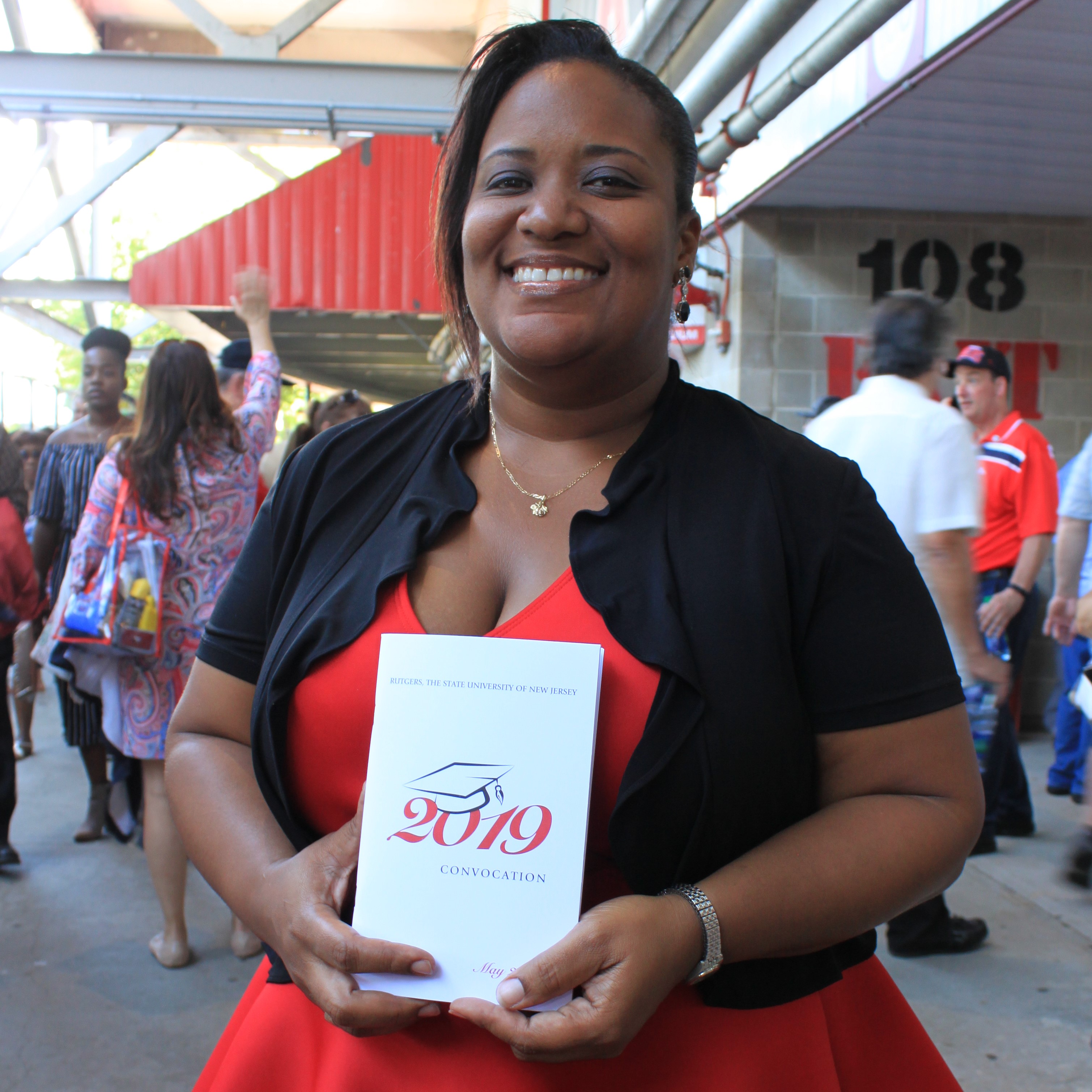 Ardeth Rudon, meanwhile, came from Belize in Central America for her daughter, Ariyan, who had transferred to Rutgers from St. John’s College in Belize.

“I was elated and overjoyed that she came here,” Ardeth said. “This is a very good school.”

In his Convocation Address, Arts and Sciences Executive Dean Peter March spoke of how the School upholds and expands on the “classical liberal arts education” of the earliest American universities.

“You should feel proud of your achievements, and proud of graduating from an institution that is rich in tradition while pursuing innovation and discovery,” March told the graduates.

He also discussed the legacy of Paul Robeson, the iconic singer, entertainer and human rights advocate who graduated from Rutgers College in 1919. Rutgers University has been celebrating the Robeson centennial throughout the year, and recently dedicated the Paul Robeson Plaza on the College Avenue Campus. 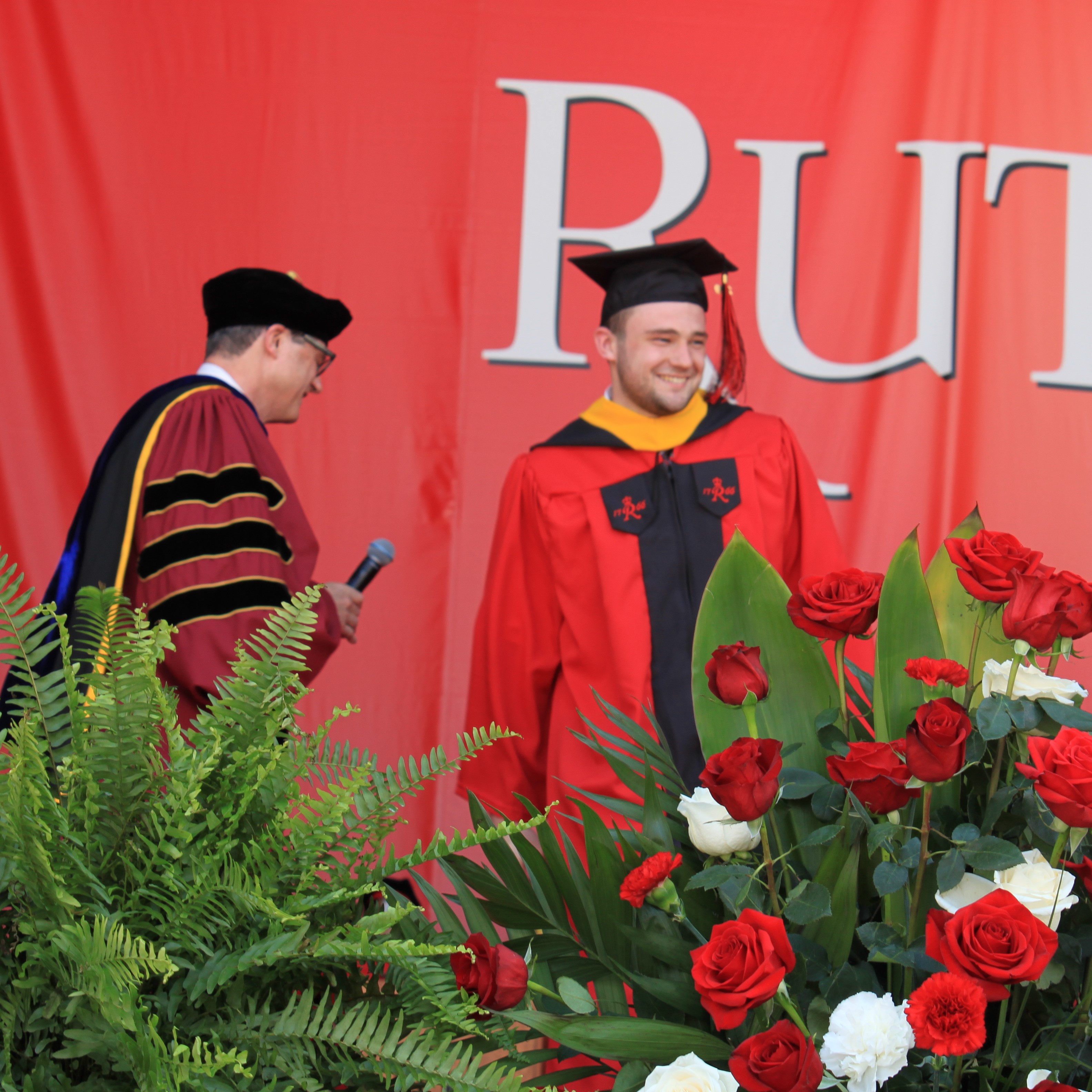 March noted that Robeson, in his valedictory address, The New Idealism, appealed to the highest values of his fellow graduates and sought to enlist their help meeting the challenges facing America in the post-World War I era. But he also spoke very specifically about racism as a betrayal of the sacrifice made by veterans on the battlefield.

“As you make your way into the world, please continue to honor the legacy of Paul Robeson,” March said. “Never forget how at Rutgers you learned to live intimately with diversity—an experience so critical in our world, especially in our current moment. Take that experience of engaging in dialogue with all the different people you have met here. Keep that openness! It’s a part of your Rutgers heritage.”