A Graduate Student’s Research brings her to Banks of the Raritan, and the Amazon 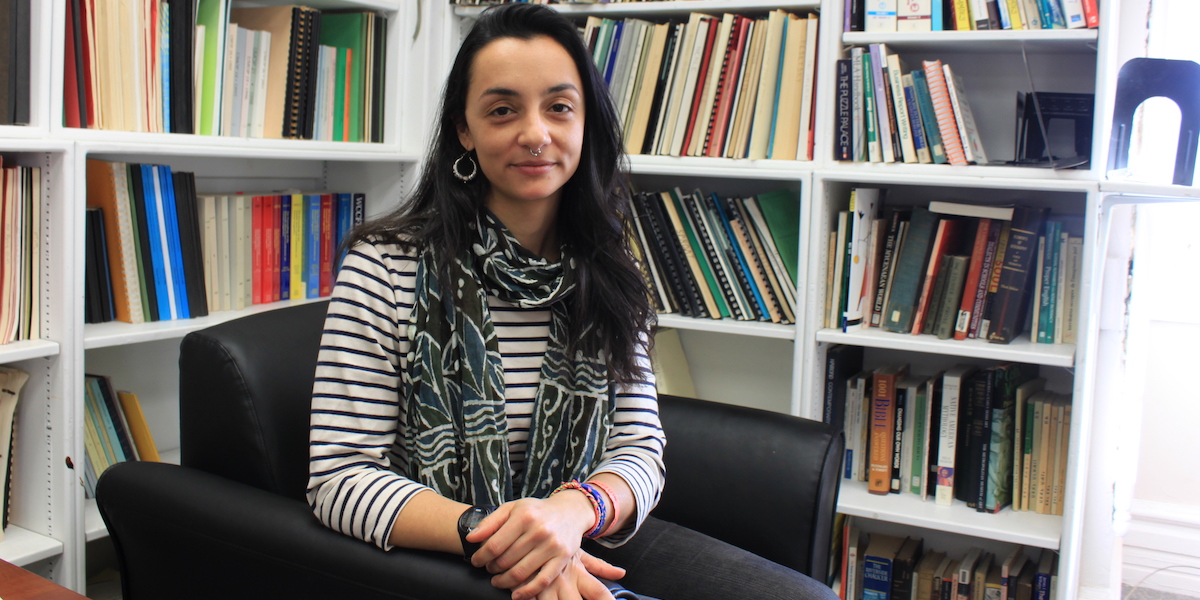 On June 26, 2014, several young men from an isolated Amazonian tribe emerged from the rainforest to make contact with the outside world. They appeared anxious, carrying bows and arrows and speaking a language none of the stunned onlookers understood.

Rutgers University graduate student Livia Camargo Souza was intrigued. She noted that their words sounded similar to the Panoan languages she had been studying as a Ph.D. candidate in the Department of Linguistics, School of Arts and Sciences.

“I was fascinated,” says Souza. “Here is this isolated community attempting to communicate in what sounds like a Panoan language.” 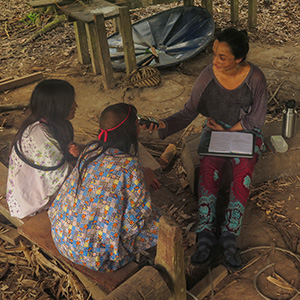 Souza is now leading the effort to document the language of the tribe, known as the People of the Xinane. The tribe numbers about 35 men, women, and children who may have been fleeing from conflict with armed intruders in Peru when they emerged from the jungle near the Brazilian border.

Several years after their emergence, Souza met the Xinanes, employing a range of techniques to decode their language.

“They were friendly, they were welcoming, they were amazing,” she says.

Souza’s work with the Xinanes reflects a calling that began in her native Brazil and later drew her to Rutgers to study with scholars like Mark Baker, chair of the linguistics department.

She found her path after witnessing a ceremony by the Huni Kuin, an indigenous community known for their strong spiritual and cultural traditions and enduring connection to the Amazon rainforest.

“They were dancing and talking about jungle medicine,” she said. “This was my first contact with indigenous culture, and it was as if a light bulb went off in my head. It seemed like an amazing world to be explored.” 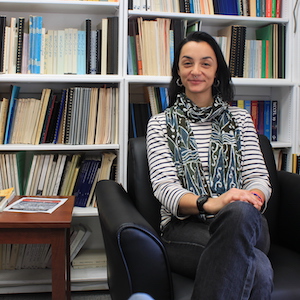 She earned her master’s degree in linguistics at the Federal University of Rio de Janeiro, specializing in the endangered Yawanawa language, a Panoan language spoken in northwestern Brazil. Her longtime adviser told her to continue her studies at an American university. She focused on Rutgers.

“I had been reading Mark Baker for a long time and was a big admirer of his work,” Souza says. “It was close to what I wanted to do—researching understudied languages, trying to find patterns and generalizations, but within a formal linguistic framework.”

Since coming to Rutgers, she has collaborated with Baker on research and done extensive fieldwork in Brazil.

For her project with the Xinanes, Souza is working with the National Indian Foundation, or FUNAI, a Brazilian government agency that has helped protect the tribe’s territorial rights and provided them with health care. Souza and her collaborator, Luana Almeida, are producing a Xinane-Portuguese dictionary of currently about 700 words and a digital archive of the language.

The project comes as indigenous people face unprecedented challenges from rapid urbanization. Even though the Xinanes are eligible for territorial rights and health care, their way of life is profoundly challenged by industrialized society, especially if they begin traveling to nearby cities.

“They'll be exposed to sodium- and sugar-rich foods, alcohol, and new diseases, as well as monetary transactions and the trappings of modern society such as television and the education system,” Souza says. “We can’t predict how all this will affect them, but we know it’s critically important to document this historical moment.” 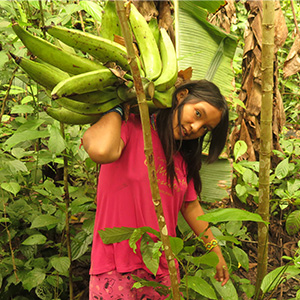 The work presents some special challenges. Although the grammar is similar to other Panoan languages, the dialect sounds very different, she said. And the Xinanes know no other language.

“I had to come up with a lot of my own methodology,” she says. “First I pointed to things. That’s great for objects, but what do you do about verbs? I asked the representative from FUNAI to start jumping around or hiding behind a pole.”

She became friends with two of the Xinane women, which also helped.

“Every day we would spend time together and play with the kids,” she explains. “Slowly I began to understand more of what they were saying.”

Beyond the wealth of research material she gained, Souza says her time spent working with indigenous people is an inspiring, revelatory experience that helps her grow as both a scholar and a person.

“You arrive with huge bags of stuff, and they have nothing,” she notes. “You begin to understand the reality of living a sustainable life in the middle of the jungle, and you marvel at what it must be like to know about every plant and tree, and what fish are in the river.”

"You begin to understand the reality of living a sustainable life in the middle of the jungle, and you marvel at what it must be like to know about every plant and tree, and what fish are in the river."