A history project focuses on an understudied group in Garden State 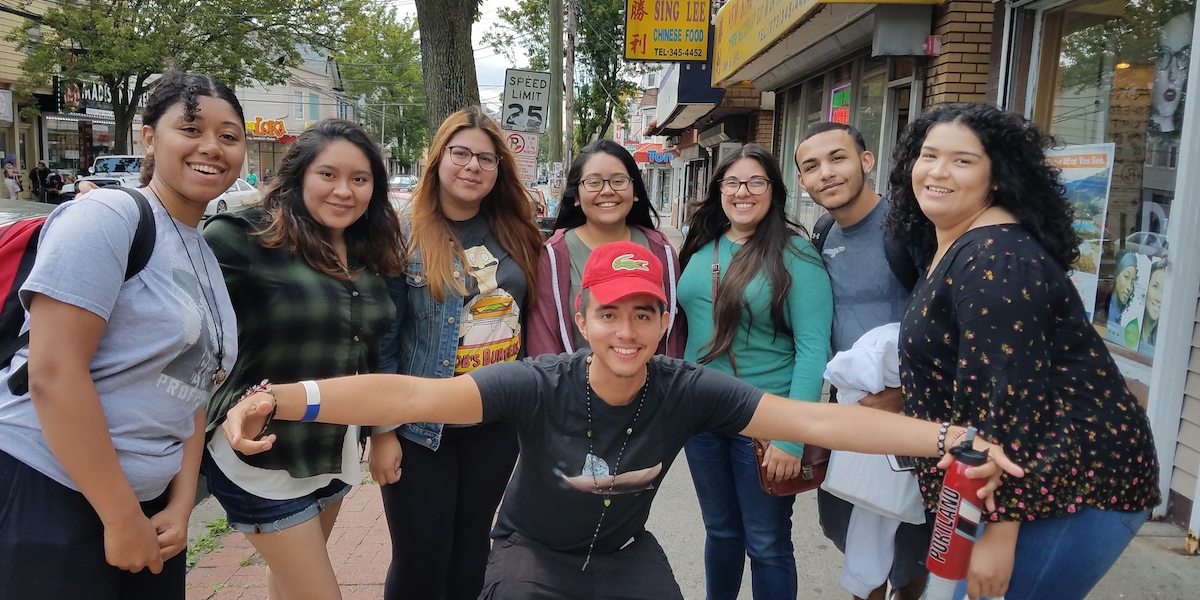 Editor's Note: Kevin Rosero, a 2019 Rutgers graduate pictured above and quoted in the story below, died in 2021. This story retains his remarks and hyperlink to his project, which demonstrate his engagement with the Latino New Jersey History Project and his dedication to researching the story of his grandmother's journey from Ecuador to the United States and that of many other Latinos to New Jersey.

Lilia Fernández, a Rutgers University professor and an expert on Latino history, sees New Jersey as something of a mystery.

Although Latinos number nearly one in five residents, their journey from the Caribbean, Mexico, Central America, and South America—and their experience settling down and building lives in the Garden State—have not received much attention from historians.

“New Jersey Latinos are understudied,” says Fernández, a Henry Rutgers Term Chair Professor in the departments of Latino and Caribbean studies and history in the School of Arts and Sciences. “The state gets overshadowed by New York City and Philadelphia. It hasn’t been the focus of a lot of historical research.”

But that is changing. Fernández and a team of energetic Arts and Sciences students have produced the Latino New Jersey History Project, a multi-media research effort that draws from census data, public archives, and interviews to provide a rich, detailed, and sometimes surprising picture of New Jersey Latinos.

“I don’t think there has been anything this comprehensive,” says Fernández, the author of Brown in the Windy City: Mexicans and Puerto Ricans in Postwar Chicago (University of Chicago Press, 2012). “And the digital humanities elements of our work will help make this history accessible to audiences at the university and beyond.”

Kevin Rosero chronicled the journey of his maternal grandmother Elsa Perez. As a single mom, Perez left Ambato, Ecuador, a city in the Andean mountain range, in search of economic opportunity. She came to Brooklyn in the 1980s and later settled in Plainfield for its proximity to factory jobs in South Plainfield. 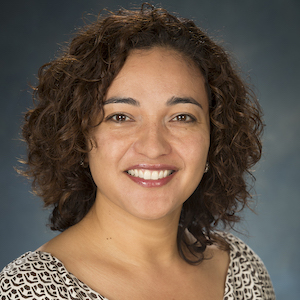 “If it wasn’t for my grandmother, I wouldn’t be at Rutgers,” says Rosero, a senior majoring in history and political science. “To be able to show who we are, where we are from, and what we are capable of—that was just amazing.”

Fernández said the project was also inspired by the work of Rutgers Newark emerita professor, Olga Wagenheim, who started the Puerto Rican Community Archives at the Newark Public Library.

The students’ research shows that the number of New Jersey Latinos has grown in the past four decades, from some 135,000 in 1970—mostly Puerto Ricans and Cubans—to 1.5 million in 2010, reflecting an array of newcomers that included Mexicans, South Americans, Central Americans, and Dominicans.

The research also highlighted the growth of major Latino population centers beyond Newark, Paterson, and Elizabeth. New Brunswick, for example, is 56 percent Hispanic and West New York is 78 percent Hispanic. The South Jersey community of Bridgeton, meanwhile, has one of the largest concentrations of Mexican immigrants in the state.

Three students, Tania Mota, Luz Sandoval, and Laura Sandoval, produced a video about New Brunswick’s history that traces its demographic changes. The video shows how Puerto Ricans began settling in the city as early as 1948, building a vibrant community, which includes Rutgers alumnus and Board of Governors member Martin Perez. More recently, Mexicans have become the city’s largest ethnic group, and their impact can be seen in the revitalized business district around French Street and Livingston Avenue.

“While New Brunswick’s colonial origins remain an important part of its heritage, it is also important to recognize the contributions of more recent arrivals . . . who have helped keep the city vibrant, buzzing, and full of life,“ Mota says in the video.

With training from ROHA, students also recorded oral histories with residents, capturing a panoramic sweep of family history across generations. Manuel Rey Jr., a Rutgers alumnus and financial services executive, told Luz Sandoval of his family’s epic odyssey in the 1960s from Cuba to Miami to Newark.

Rey now lives in the northern New Jersey suburbs, reflecting a more recent move out of the urban centers and into the surrounding bedroom communities. 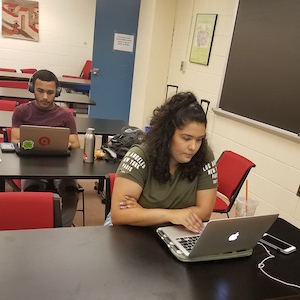 “Since 1980 there has been a steady decline of Cubans in the major cities that Cubans once dominated, including Union City and Newark,” Sandoval wrote in her story map, providing color coded maps illustrating the settlement changes over time.

Regardless of residential moves, however, Rey spoke about the importance of food in preserving and passing on his heritage.

Students say the project provided both research experience and an opportunity to dig deep into histories in which they have roots.

Aracely Ortega, a sociology major, said poring over census data as well as combing through newspapers and books, and visiting the Puerto Rican Community Archives was excellent preparation for graduate school. She also helped produce a video about her hometown of Union City.

“I grew up in a community where everyone I interacted with spoke Spanish, and probably went home to eat, listen, and dance to the same things I did,” she said. “Studying the history of Union City through my own research deepened my understanding of how my community came to be.”

Aziel Rosado, a junior majoring in mathematics, says the project was the culmination of a personal journey that began in his first year when he lived in the Latin Images Living Learning Community. As part of the program, he took an introductory Latino studies class, taught by Fernández. His intellectual curiosity was piqued, and he decided to minor in Latino and Caribbean studies and become a research assistant to Fernández.

“This was all the result of taking her course,” says Rosado, an aspiring high school math teacher. “Thanks to this project I was not only able to learn more about Latino history in general but I was also able to learn about my own cultural identity as a Puerto Rican and the importance of connecting back to one's roots.

“I am so grateful I was asked to participate.”

For Fernández, the project serves as both an educational resource for the public, and a means to political empowerment for Latinos.

“Latino communities may discover that their numbers are much larger perhaps than they even realize,” she said. “It educates the public about the history of these more recent immigrant groups and lets people know who their neighbors are. Jersey natives might find that their neighbors’ family migration stories are very similar to those of their own ancestors.” 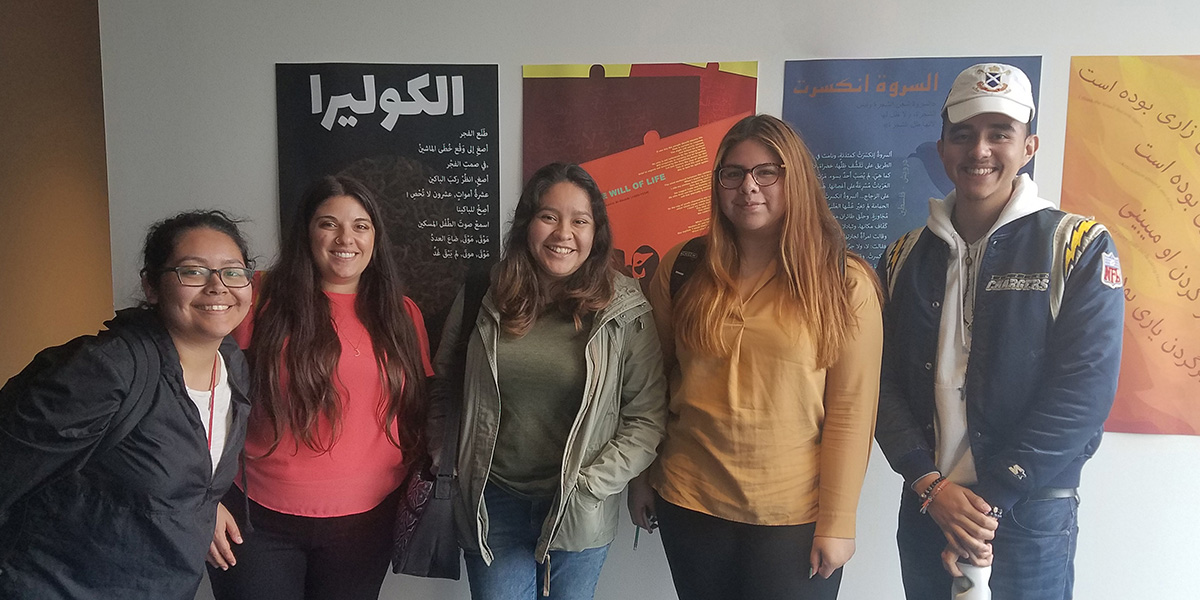