At 14, He Began his Mission to Treat Autism 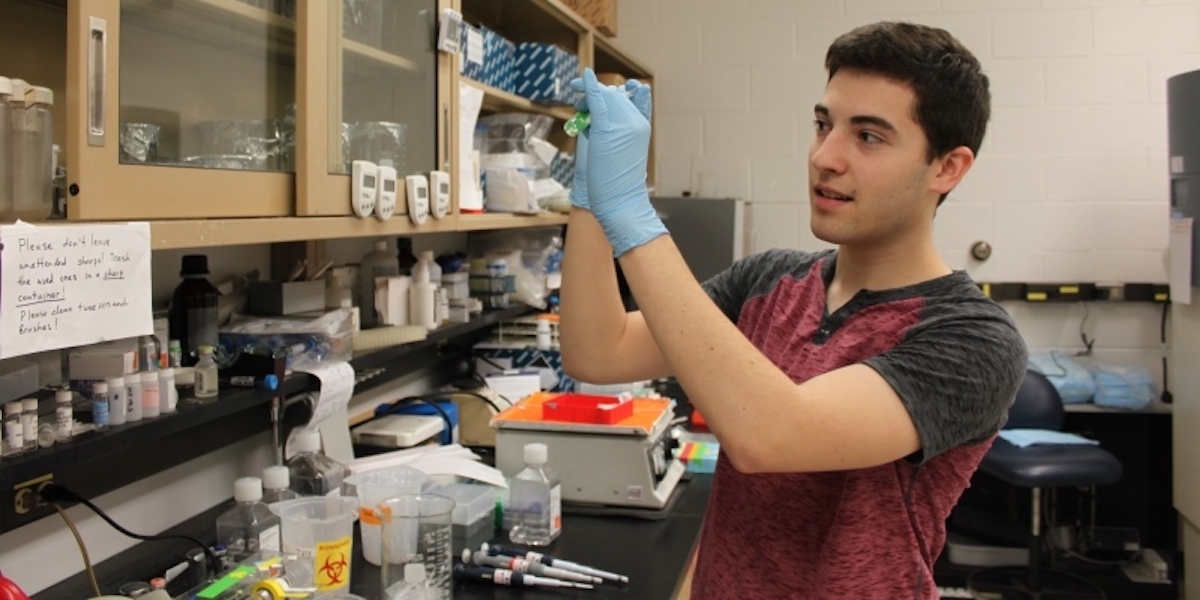 Nicholas Page was just 14 when he started working in the lab of a Rutgers–Robert Wood Johnson Medical School professor.

He landed that gig by simply asking for it. Page was participating in the Brain Bee, a competition for high school students hosted by the Medical School.

“I was mingling with faculty and asking about research opportunities for high school students,” he says.

The one who said “yes” was Mladen-Roko Rasin, a professor of neuroscience and cell biology who studies the formation of the brain, and how it is disrupted in diseases such as autism and epilepsy.

I love the research-friendly environment at Rutgers.

“The rest is history,” says Page, of Matawan, New Jersey.

Indeed, he is now a School of Arts and Sciences and Honors College junior on a bold mission.

“I want to work on some of the first drug-based treatments for autism,” says Page, a cell biology and neuroscience major. “This is one of the hardest problems, but one I think we could solve in my lifetime.”

To get a sense of the seriousness with which Page is pursuing his goal, consider how he spends his summers. In 2017 he journeyed to the Perelman School of Medicine, University of Pennsylvania, where he worked with Yoseph Barash, a professor studying mRNAs to gain insight into ALS, or Lou Gehrig’s Disease. Last summer he moved to the West Coast to work at UCLA with Daniel Geschwind, a leading scholar in the study of autism genetics.

“Each summer I travel to labs across the country to learn new techniques and explore my interest in ways that will give me a bigger picture,” he says.

Page, the son of a police officer and a special education teacher, always loved science, but initially ruled out biology until Paul Servidio, a science teacher at Matawan Regional High School helped him see the field in a different way.

He was deeply influenced by his mother’s work educating kids with special needs, and from knowing families who have children with autism.

“It is something I have been exposed to enough to understand its impact, and to know I want to commit my life to finding treatments,” he says.

As an undergraduate, he has seized every opportunity for research, sometimes working up to 40 hours a week. He is currently performing experiments in laboratory mice to see how impeding blood flow in embryos could cause neurodevelopmental disorders.

He was selected as a Goldwater scholar by the Barry Goldwater Scholarship and Excellence in Education Foundation last spring, one of the premier undergraduate awards in STEM fields.

“I love the research-friendly environment at Rutgers,” he says. “By investing a lot of time in this research, there are no bounds to what we can figure out and how big of an impact we could have.”