Finding Innovative Ways to Get Involved in Elections 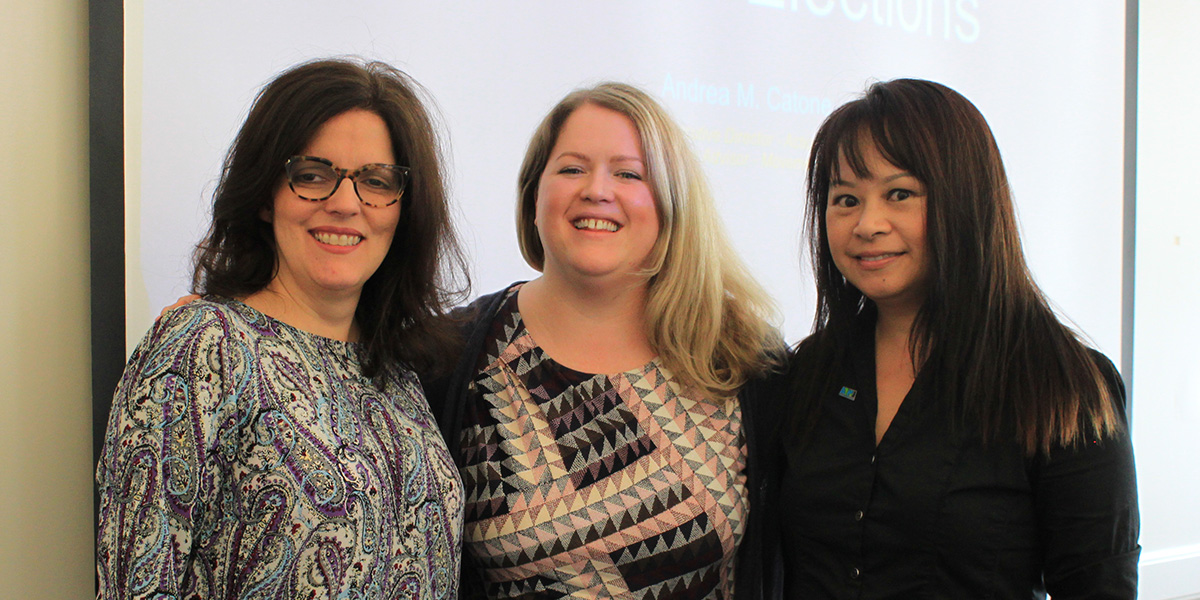 On Election Night 2016, Andrea Catone was at home feeling disappointed and angry as the results rolled in.

But this Rutgers University alumna and current graduate student soon noticed a surprising—and encouraging—development. A social media group she had launched two days earlier to encourage people to discuss issues and get involved on the local level was surging in membership. 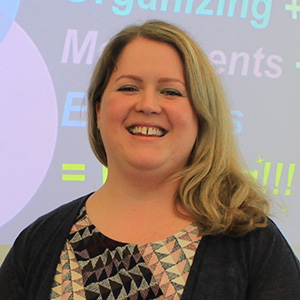 Catone, who studies social movement networks, saw similar trends unfolding across the country along with the emergence of many new grassroots groups.

“I felt hope begin to mix with my anger as I watched hundreds of thousands of people become galvanized to action, many for the first time,” she says. “I knew it would be powerful to connect them to each other.”

So Catone co-founded Action Together Network (ATN) with the goal of linking up leaders of progressive, grassroots groups to help them build relationships, capacity, and power. Two years later, ATN connects over 800 leaders in 50 states and 12 countries whose groups have a combined membership reach of over 5 million, she said.

“By connecting people across organizations, they have the opportunity to share best practices and learn from one another,” Catone says. “And in the process, they build their own leadership capacity and become stronger in what they are doing.”

Catone recently delivered a presentation at Rutgers University–New Brunswick, explaining to an audience of faculty, staff, and students about the ways they can get involved in the midterm elections of 2018.

“There are concrete actions that you can plug into right now and get involved,” she said during Defending Democracy: Making a Difference in the Midterm, which was organized by the Institute for Research on Women. “One of the most important things is to build community around taking action. Relationships are critical to sustaining our work, especially in these dire times.” 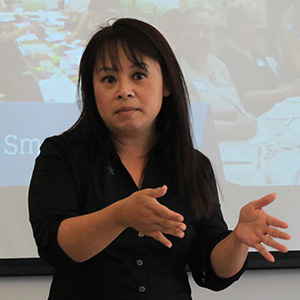 Khuong, executive director of Action Together New Jersey, started the Post-it-Posse, recruiting volunteers to send vote-by-mail information with friendly post-it notes. The mailings, she said, help get the vote out, and raise awareness among citizens, including working people and the elderly, that they can cast a vote without having to take time off from work, obtain childcare, or find transportation.

And, she adds, the volunteers enjoy sending out the post-it notes.

“People love this,” she said. “It’s non-partisan; it increases our engagement in democracy, and it’s something that’s hands on that they can do.”

Avelenda, meanwhile, is the executive director of NJ 11th for Change, a group formed after the 2016 election to help inform voters and push for change in the 11th Congressional District, which covers 54 communities in northern New Jersey. Avelenda noted that only a small fraction of the district’s Democratic voters cast ballots in the 2014 midterm election. So the group has organized canvassing teams for every town.

“People need to know who and what to vote for, and where candidates stand on the issues,” Avelenda said. “The idea of canvassing is to bring that information to the door. It’s about looking the other person in the eye and asking them ‘what matters to you?’’’ 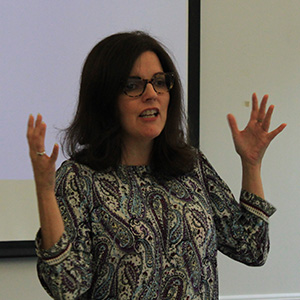 The group has already had a major impact. Representative Rodney Frelinghuysen, the powerful Republican who has held the seat for more than two decades, announced in January 2018 that he would retire at the end of his term.

In addition to canvassing, making phone calls, and other volunteer efforts, Catone told the audience that they can make a difference straight from their smart phones. She demonstrated the VotewithMe app, which allows users to send texts reminding friends about elections in their districts,  as well as Movement Voter Project’s online curated funds that directly support hundreds of grassroots groups doing critical vote work across the country.

Catone, who grew up in Cranford, NJ, became interested in political activism when she lived in Berlin as an exchange student for her junior year of high school. She was impressed with the way young Germans confronted the history of the Holocaust and also by students taking on issues such as funding for education as well as supporting teachers, who had decided to go on strike.

“Seeing those students not only caring so deeply, but also organizing, taking action, and working collaboratively had a profound impact on me,” she said.

Catone’s first major stint as an activist was in the run-up to the Iraq War. She helped United for Peace and Justice organize campaigns and anti-war demonstrations, including the one in New York City on Feb. 15, 2003 that drew more than 500,000 people.

Catone majored in philosophy as a Rutgers undergraduate. Although she enjoyed the intellectual discipline, she decided sociology was ideal focus for her graduate studies.

“Sociology allowed me to look beyond theory,” she said. “Sociology empowers me with tools and methods to examine peoples’ practices, behaviors and relationships.”

Andrea Catone's presentation, Defending Democracy: Making a Difference in the Midterm, was part of the Rutgers Public Engagement Project, which is run by the Institute for Research on Women, and sponsored by the Office of the Chancellor, Rutgers University-New Brunswick. For more information, visit the website.