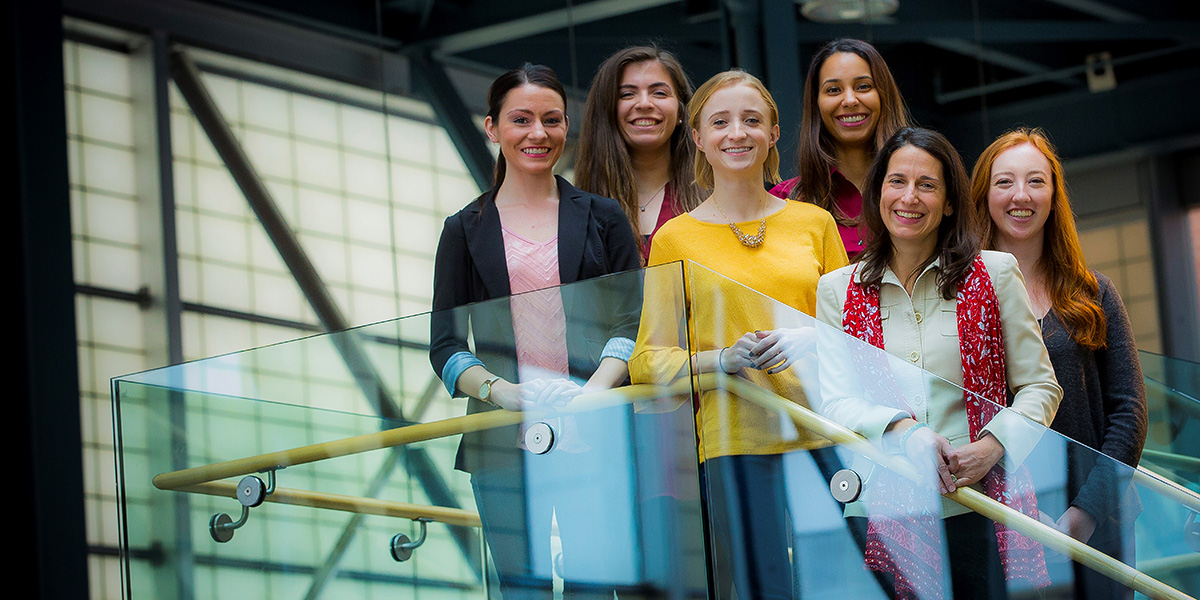 It was just a classroom role-playing exercise.

But the stakes were high.

Students had to demonstrate unflinching empathy and expertise in the face of devastating circumstances.

With the rest of the class watching, Rutgers University graduate student Francesca Spinosi played the role of a genetic counselor disclosing grim test results to classmate Taylor Reeve who acted as the patient. 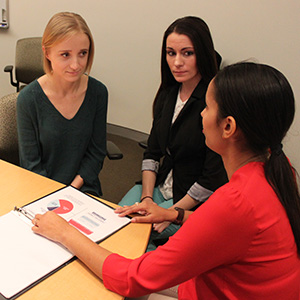 “You have a mutation in your gene, which means that later in life you will develop Huntington’s disease,” Spinosi said.

A fatal genetic disorder that causes deterioration of a person’s physical and mental abilities, Huntington’s disease has no cure.

After a brief but intense conversation between “counselor” and “patient,” the students’ professor, Jessica Joines, stepped in and told them to take a breath.

“How’d it feel to get those words out?” Joines asked.

“Getting the words out was a challenge,” Spinosi replied. “But it was harder knowing what to say afterward.”

She will have plenty of opportunity to practice. Spinosi and her classmates are the first students in the new Genetic Counseling Master’s Program at Rutgers University–New Brunswick. Joines, the director of the program, has them do role-playing exercises throughout the semester to prepare for their chosen calling.

“Delivering bad news and helping patients make difficult decisions is a significant part of what we do,” says Joines, of the Department of Genetics in the School of Arts and Sciences. “Our students not only have to master rigorous science content, they have to explain those concepts in a very understandable and empathic way to patients.”

The program, which began last year, reflects a core SAS mission to prepare students for the complex societal challenges of the 21st century. It also promotes collaboration between Arts and Sciences, the Rutgers School of Graduate Studies, and Rutgers Biomedical and Health Sciences (RBHS).

“With the explosion of genomic technology over the last several decades, genetic testing is becoming standard-of-care, and part of a lot of specialties,” Joines says.

Those advances mean that genetic counselors often have expertise that experienced doctors lack.

“The number of practicing physicians who are trained to understand genomic data is very small,” says Linda Brzustowicz, a professor of genetics and former chair. “Genetic counselors are going to become a critical piece in the overall healthcare delivery system.”

Indeed, the field is poised for big-time growth: The U.S. Bureau of Labor Statistics has projected that the number of positions will expand 28 percent by 2026. The Rutgers master’s program drew 167 applicants for six slots in the first year, and 160 for eight openings in the second year.

“There aren’t enough graduate programs turning out well-trained individuals to fill the need,” says Gary A. Heiman, a professor of genetics who helped create the graduate program and is director of the department’s undergraduate certificate program, the only one of its kind worldwide.

Rutgers students like Amanda Roth say they’re drawn to the field by the innovative science and the strong sense of mission. At the University of North Carolina, Roth majored in biology, served as a counselor at a rape crisis center, and volunteered at a medical clinic during a spring break trip to Panama.

“I completely relate to the advocacy role of the genetic counselor,” Roth says. “It’s all about using knowledge to help people.”

you are really guiding the patient and giving them the information they need to make informed decisions.”

Audrey Morrissette, who was a health science major at Quinnipiac University and whose mother and sister both work in nursing, agreed.

“I see genetic counseling as direct patient care but different from other health tracks,” she says. “There is an education piece where you are really guiding the patient and giving them the information they need to make informed decisions.”

Students Caitlin O’Brien and Laurie Simone both majored in psychology as undergraduates, but also had strong interests in medicine.

“Genetic counseling is a good mesh of the two,” says O’Brien, a graduate of Hartwick College.

Simone added that the profession seems to be already expanding beyond hospitals and clinics to private labs and research centers.

“We feel like pioneers,” says Simone, a graduate of Seton Hall University.

The field’s increased visibility was highlighted several years ago when the actress Angelina Jolie wrote in The New York Times of discovering she had the BRCA1 gene for breast cancer and deciding to have a preventive double mastectomy.

“It could be a young woman diagnosed with breast cancer coming in to see whether there is a genetic component,” says Joines, who previously served as assistant director of the genetic counseling graduate program at the University of Maryland. “But it could also be precautionary, such as a patient who has colon cancer in his family and wants to understand the risks.”

The Rutgers graduate program is the first in New Jersey and offers a major advantage: Students can do rotations with trained genetic counselors at Robert Wood Johnson Medical School (RWJMS) and Rutgers New Jersey Cancer Institute, both part of RBHS. The  students took their “Medical Genetics” class at the Child Health Institute of New Jersey, part of RWJMS. The course is taught by Susan Brooks, a professor at the medical school who also serves as medical director for the graduate program.

“Most of the Big Ten schools have genetic counseling training,” Brooks says. “There was really a need for one in New Jersey.”

The program also offers internships at other hospitals and health facilities throughout the state, and students also have the opportunity to work in industry, advocacy, and research roles.

“I like that the program is geared toward the way the field is moving,” says Reeve, who majored in biology at Rutgers University–Camden.

Students cite another benefit of the program: They’ll be entering their profession in a relatively short period of time. The second year students are completing their field work and some are already applying for jobs.

Spinosi, who shadowed genetic counselors during her undergraduate years at Rutgers University–New Brunswick, says the work is always inspiring.

“There is a lot of interaction with people—doctors, laboratories, insurers—and most importantly the patients,” she said. “You are communicating with people in all these healthcare roles to making sure the patient is getting the highest quality of care.” 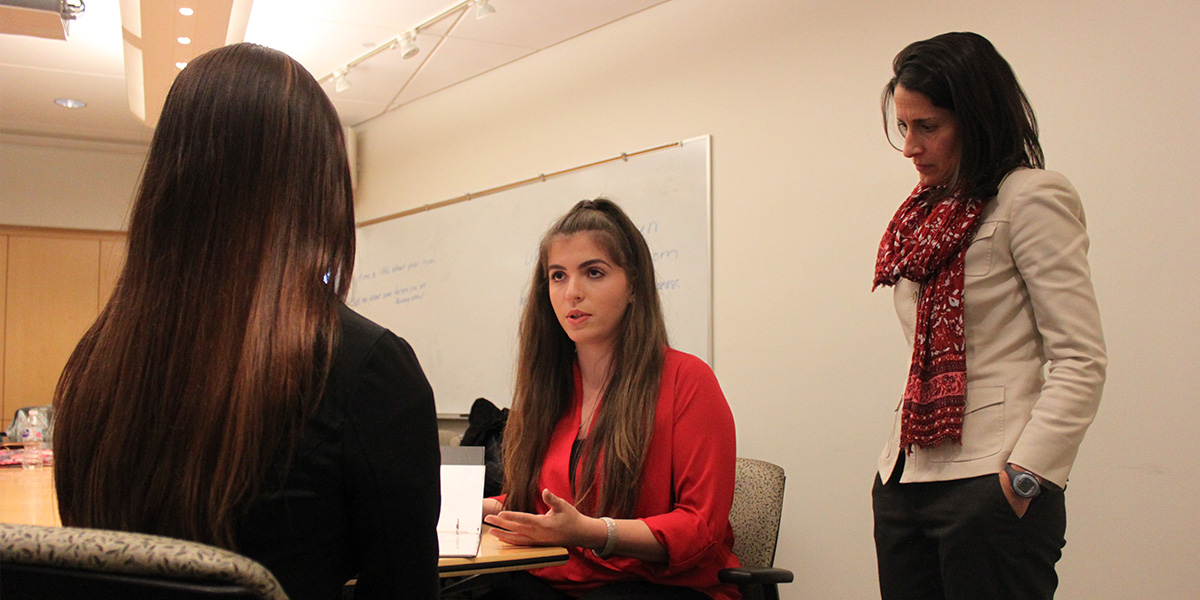