Soo Jeong Hwang, a Molecular Biology and Biochemistry major, takes advantage of the Rutgers School of Arts and Sciences focus on interdisciplinary studies by minoring in French. 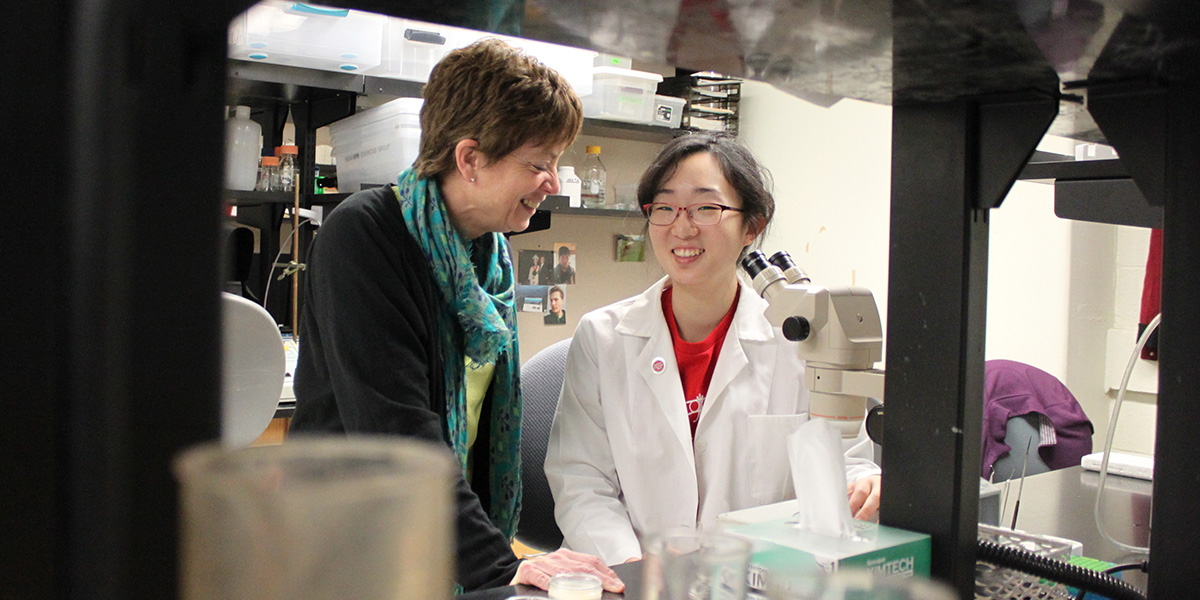 Honors science student found inspiration inside and outside the lab

But she never dreamed she’d also sing French songs in class, learn a Japanese martial art, and travel to the Netherlands to visit Rutgers’ sister university.

Indeed, this School of Arts and Sciences Honors Program senior says her four years at Rutgers University–New Brunswick have been transformational in ways she could never have predicted.

“When you walk through one door, another one opens,” this Class of 2018 graduate says.

Hwang was 11 when her family moved from Seoul to New Jersey. Her parents, both of whom had earned university degrees in Korea, run a laundromat in Newark.

“It’s very hard work,” she says. “I will always be grateful to them.”

When you walk through one door, another one opens

As an undergraduate, she chose one of the most research intensive majors—molecular biology and biochemistry—and worked in the laboratory of biologist Monica Driscoll, learning about aging and increasing the health span, or the time in people’s lives when they are healthy. According to Driscoll, Hwang’s research may have identified a central regulator in worms that couples simple exercise to health benefits.

“This regulator is related to similar proteins in humans but can be studied from a novel angle in the simple animal model,” Driscoll says. “Soo Jeong has produced exciting data that will fuel research for years to come in our group.”

Hwang also worked in the laboratory of chemistry professor Lawrence Williams, and landed an internship at Bristol-Myers Squibb, the pharmaceutical company.

And she made many exciting discoveries outside of the lab and the classroom, patiently building an eclectic and lively undergraduate experience.

She joined the Molecular Biology and Biochemistry Society, serving as secretary, vice president, and co-president and organizing jaunts to places like the Mütter Museum at the College of Physicians of Philadelphia.

“I found that organizing events is one of my strengths,” she says. “I help schedule guest lectures, faculty-student mixers, and trips to New York City.”

She journeyed to the Netherlands with other honors students to visit the University of Utrecht, did outreach to high school students about diabetes, and is now just two levels shy of a black belt in Kendo, a Japanese martial art that uses bamboo swords and protective armor.

“You do it to build discipline rather than to fight,” she says.

One her most surprising and memorable experiences came during professor of French Uri Eisenzweig’s “Songs of Modern France” course.

“We actually sang in class,” says Hwang, who minored in French. “It was amazing how the class came together to perform at the end of the year—in front of guests. It was really fun, and really liberating!”

Asked about what she will miss the most about Rutgers, she doesn’t hesitate.

And for future students, she offers this advice:

“If there is something you want to do, then you should go ahead and try it,” she said. “There is no reason to hesitate.”

Following graduation, Hwang will continue with the internship at Bristol-Myers Squibb where she conducts computational analysis to predict which drugs will work on cancer patients, looking at as many as 33 different types of cancer.