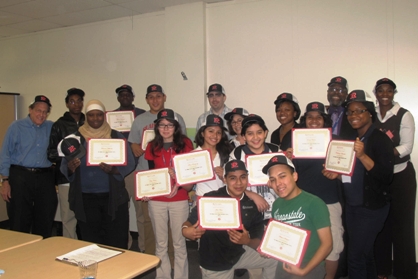 He and two dozen fellow students in this economically struggling community near Newark began last year reading poems by A.E. Housman, studying the works of Plato, and writing essays on discrimination in contemporary society.

“This has changed my perspective in so many ways,” Williams said.

The students were participants in the Rutgers Early College Humanities Program, or REaCH. The program offers high school students in historically underserved communities the opportunity to take a credit-bearing, college-level course in the humanities, taught at their own schools by professors and instructors who are experts in their respective disciplines.

The program was started in 2008 by the School of Arts and Sciences (SAS) and is overseen by Michael Beals, SAS vice dean of undergraduate education, and Martin Kempner, REaCH director. It has served 650 students since its inception.

‘Students in REaCH experience firsthand what college will be like,” Kempner said. “They study with college professors, do college level reading and written assignments, and engage in thought-provoking discussions.”

During the summer, the REaCH program comes home to Rutgers, holding classes on the New Brunswick and Newark campuses.

On the New Brunswick Campus, REaCH is an integral part of two noted pre-college programs, Rutgers Future Scholars and Rutgers Upward Bound. Last summer, students in both programs read and discussed plays and essays, focusing on themes of social justice and equality.

All told, REaCH served nearly 100 students over the summer.

“REaCH provided a dynamic and intriguing curriculum that captured and ignited the minds of our Future Scholars,” said Kim G. Williams, a program coordinator for Future Scholars, about the classes on the New Brunswick Campus. “They learned that injustice and inequality aren’t only in their own backyard, but that they exist in other places, and other cultures.”

Jackasha Wiley, a developmental specialist with Upward Bound, said the REaCH experience helped give students the confidence that they can handle college work.

“They learned what they’re capable of academically,” she said. “They realized they can write the papers, read the scholarly texts, and contribute meaningfully to class discussions.”

Thais Pantaleon, a Future Scholars student, said she particularly enjoyed the play 12 Angry Men, which students read during the class.

“Reading the text and then having the opportunity to recite the lines of different characters really had an impact on me,” said Pantaleon who attends the Health Sciences Technology High School in New Brunswick. “You could really get into the characters’ minds and understand their motivations on a deep level.”

Juan Acosta, also a Future Scholars student, said he had been considering a career in law. The reading of 12 Angry Men helped finalize his decision.

“As I read the play, I kept thinking that I would feel very comfortable doing this,” the Piscataway High School student said. “So it did influence my decision to become a lawyer.”

Schuyler Davis, an Upward Bound student, said his REaCH experience was also personally transformative. He cited an ethics class in which he learned about the ripple effects of seemingly small, individual actions.

“It really caused a paradigm shift in my thinking,” said Davis, who attends the Central Jersey College Prep Charter School. “I am much more aware of the domino effect of our actions. I have a much more complex understanding of what should drive our decisions.”

In the 2012-2013 academic year, students in Camden, Newark, Plainfield, Carteret, and Irvington will have the opportunity to take REaCH courses.

Williams, the Irvington student, said his favorite subject was history. He and other students studied selections from the book Letters of the Century: America 1900-1999, which contains letters from some of the most famous figures of the century as well as those from ordinary people.

“The letters are so personal – it was a very different way of studying history,” he said. “You can really understand what people were feeling and what they were going through at different points in the century.”