Sometimes all it takes is one course to awaken students to their calling. 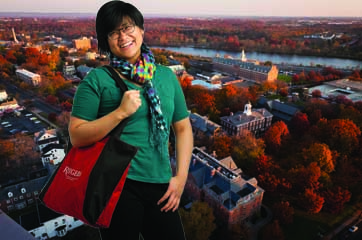 Arielle del Rosario was a School of Arts and Sciences junior and psychology major with broad intellectual interests ranging from art history to education when she took Professor Maurice Elias’ class, Community Psychology and Mental Health.

Community psychology, which emerged in the 1960s, examines how individuals relate to society. Del Rosario, who had previously planned to be a special education teacher, said the class showed her the roles that schools, family, and other social forces play in the development of citizens. She also learned how community psychologists work on a grassroots level through social action based on research to improve the mental health of a community.

“Dr. Elias’ class really opened my eyes that psychology was more than individual clinical practice,” del Rosario said.  “The concepts and theories I was learning - why communities are important and how they work, and how that relates to diversity and social justice - really resonated with me.”

The class helped her clarify her goals:  She wants to study community psychology in graduate school.

It also deepened her burgeoning interest in community service.

Elias’ course included an option to volunteer at a local Head Start, allowing del Rosario to put into practice the concepts she was learning. She has since become heavily involved in the university’s Civic Engagement and Service Education Partnerships Program, CESEP, which specializes in creating public service projects with a strong academic component.

“One of the things I took out of the Dr. Elias’ class was the theory behind empowering individuals and communities,” del Rosario said. “I saw how this could be applied in a larger context in American society.”

Elias, who is the director of CESEP, said del Rosario evolved during the course from a focus on helping individuals to gaining an understanding of what it takes to help a community. She studied the writings and speeches of Sargent Shriver, the statesman, activist, and founding director of the Peace Corps.

“At one point you realize that there are more individuals that need to be helped, than can be helped in an individual way,” Elias said. “So you start thinking about this in a bigger way. Then you see someone like Shriver, who is a great example of someone who changed the world.”

Del Rosario, a Metuchen native and the daughter of Filipino immigrants, had come to Rutgers uncertain about her future.

“I didn’t know what I wanted to do,” she said. “But I knew Rutgers was big enough that whatever I did want to do, chances are I was going to find it here.”

In the end, she said the breadth and depth of SAS helped her forge her direction.

“It’s funny how that can really snowball into finding your passion. I found something I didn’t even know I wanted to do.”

Read about more outstanding seniors in the Rutgers Class of 2012 here.