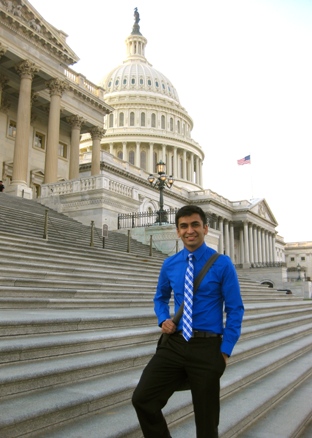 On that sunny September morning in 2001 when terrorists flew jets into the World Trade Center and Pentagon, Zain Ahmad had just started sixth grade.

The 11-year-old from Old Bridge, N.J., who had always seen himself as the same as everyone else, suddenly knew that he was not just another American kid. Others saw him as different and, in some ways, he felt different.

“There was this collision between all my different identities - being American, being Muslim, and having a Pakistani heritage,” said Ahmad, whose parents moved to the U.S. in 1980. “It was one of the most confusing times in my life.”

But the crisis proved transformative. In high school, he took a course in international relations, and found a sense of purpose and direction in politics.

“I felt the best thing I could do was to help create policies that would help the country progress forward, and make the right decisions rather than fall back and repeat the mistakes of the past,” the graduating senior said. “The best way to pursue that goal would be through public service.”

It was at Rutgers that everything came together. He became a student leader with a deft ability to build bridges between different groups, and help serve underrepresented communities.

At the School of Arts and Sciences, where he majored in political science, and minored in religion, Ahmad sharpened his understanding of politics, resolved internal questions about Islam and democracy, and strengthened his core convictions

He leaves Rutgers comfortable in all his complexity, and hoping to emulate role models and trailblazers such as Keith Ellison, Hillary Clinton and Barack Obama.

“At Rutgers it really was a case of Jersey roots and global reach,” he said. “I felt I had this incredible foundation upon which I could grow, form new ideas about the world, and put those ideas into practice.”

The breadth and depth of his experience in SAS is evident in his plans for next year: He is deciding between going to law school, taking a job with the legal department at Google, or becoming a Fulbright Scholar to study in Turkey.

“One of my long-term goals is to be in public office,” he said. “Whether that is in the House or the Senate, or even state or local, that is an open journey.”

As a student leader, Ahmad showed himself to be both a maverick and a unifying figure able to bring different types of students together.

In his second year, for example, he became the first and only student of Pakistani descent to join the Association of Indians at Rutgers.

“I had a lot of Indian friends, I wanted to learn about Indian culture, and so I just applied to the association,” he said. “My feeling was we’re all in this together, and we ended up putting on some fantastic programs.”

Indeed, his success with the Indian group prompted Pakistani students to recruit him for their student association, which he joined as secretary in his junior year. He had to leave the Indian group, but vowed to continue working to bring together all students with a South Asian background.

He achieved that goal within the year, working with others to present the first student-run South Asian conference at the university, a day of cultural exchange and academic learning.

“The takeaway for everyone was the realization that the animosity between the two countries is exactly what is holding both nations back,” he said.

As a member of the Rutgers University Student Assembly Allocations Board, Ahmad helped win additional support for groups like Alternative Breaks, in which students perform community service work in hard hit areas like New Orleans and coal mining towns in West Virginia. 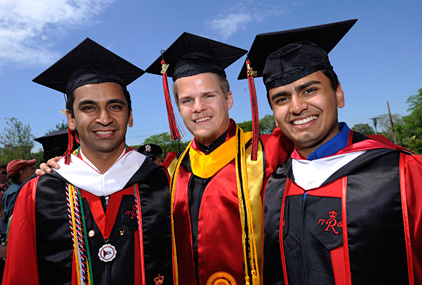 As Ahmad’s volunteer activities shaped him as a leader, his classroom experiences contributed to his intellectual development.

One of the questions that preoccupied Ahmad after 9/11 was whether Islam was compatible with his Western liberal political orientation. It was a difficult question because the Islamic governments that get the most attention from the Western press are theocracies like Iran, or Afghanistan under the Taliban.

But a course called Islam and Democracy, offered through the Department of Political Science, presented a more complex picture of the world for Ahmad. He learned, for example, how democratic values were present in the early Muslim communities and during the Islamic Golden Age. He saw how Western demand for oil undermines democracy in the Middle East, and empowers repressive regimes. He studied functioning Islamic democracies in Turkey and Malaysia.

“It definitely opened up my eyes,” he said. “People have this complaint that Muslim societies are backward and are unable to build democratic institutions, but that’s not the case.”

Ten years after 9/11, Ahmad said there is no need for young Muslim Americans to feel an identity crisis. He sees public figures like Ellison, who was the first Muslim member of Congress, as a role model – serious in his faith, politically progressive, and committed to the greater good.

“At the end of the day, we are all human,” Ahmad said. “I am a Muslim American, but we are part of the fabric of society. We are lawyers, teachers, and nurses, and we should band together to do what’s good.”

Read about more outstanding seniors in the Rutgers Class of 2012 here.