Nurturing a New Generation of Biologists 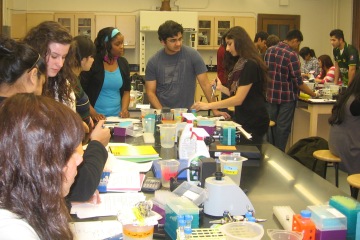 Shiza Sarfraz took advanced placement biology in high school. When she entered Rutgers last fall, she figured she knew what to expect from her introductory biology course.

But her experience in a new lab course in the School of Arts and Sciences (SAS) has expanded her understanding of science in ways she hadn’t imagined.

She and her classmates work in small teams, like professional researchers, learning skills such as how to analyze DNA sequences, and publishing their findings on national databases. Their research is often self-directed, and graded on its scientific merits rather than on getting the “right” result.

“This is more like what scientists do every day,” Sarfraz said. “Even though AP biology is supposed to be college level, it was nothing like this.”

Sarfraz is one of about 120 students participating in a pilot program aimed at transforming General Biology, the standard introductory biology course for thousands of Rutgers students, from future medical school students to others simply fulfilling their science requirement.

The pilot reflects a national movement to better prepare students for the science professions and advance the level of scientific literacy among the public. It was designed by Gregg Transue, Andrew Vershon, and Martha Haviland in the Division of Life Sciences (DLS) and supported by a National Science Foundation grant as well as funding from SAS.

The new lab gives students a taste of what it’s like at a professional research lab, where there’s no professor providing the answers. Students plunge right into the scientific process rather than memorizing a lot of facts.

“It’s not a cookbook lab,” said Haviland, the director of the Office of Undergraduate Instruction for DLS. “The students are actually generating and creating new knowledge. And for an introductory lab course, that’s pretty unusual.”

A lab in the Biological Sciences Building recently got a makeover to accommodate the changes. Gone are the old workstations that had students sitting in long rows and working mostly by themsleves. 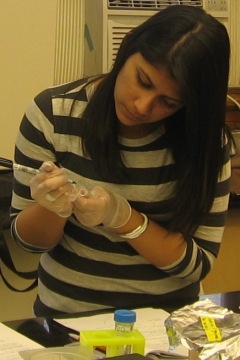 During a recent class, students stood at rectangular tables as they worked cooperatively through experiments, learning how to use tools like micropipetors, and occasionally sitting down to jot some notes. A graduate student teaching assistant offered guidance and encouragement.

“I like that it’s so hands-on,” said Carly Kacprowicz, a sophomore considering a major in cell biology and neuroscience. “I’m actually getting an understanding of what I will be doing in medical school.”

Boyd Gonnerman, the teaching assistant, said the differences between the new lab and the traditional one are clear. Students in the pilot get exposed to other disciplines that intersect with biology, including statistics and biochemistry.

“This is more like a research class,” Gonnerman said.

Besides the new lab, students in the pilot attend a biology workshop in which they investigate and discuss research topics. All students, whether in the pilot or traditional lab, take the full-year General Biology course.

The changes come as enrollment for General Biology rises. The course drew 2,200 students last fall reflecting a steady increase from the 1,700 or 1,800 of several years ago.

Anxiety over the continued tight job market may have contributed to the surge in interest.

“One of the general trends we see is that during times of economics stresses, healthcare seems like a safe place to go if you are looking for a job,” Haviland said.

She cited a recent study that said the state’s pharmaceutical companies, biotechnology firms, and medical device manufacturers are still strong despite economic challenges.

The analysis by the New Jersey Department of Labor and Workforce Development found that those industries employed nearly 4 percent of all private sector workers in the state, nearly twice as high as the national average. The three sectors combined also accounted for $14 billion in wages during 2010, or 8.1 percent of the state’s total wages.

“All of those industries, as well as the allied health fields and the medical fields need a well-educated, well-trained workforce,” Haviland said. “And we are meeting those needs to a certain extent with this lab.”

Indeed, students can make themselves more marketable just by learning how to use the lab equipment, such as high-grade micropipetors, which dispense micro-liters of solution containing DNA and proteins, noted Transue, who oversees the introductory biology program for the DLS.

“Once they learn the terminology and the techniques, they can promote themselves for a summer job or an internship” Transue said. “Traditionally they would leave the course not having these skills.”

As the semester progresses, students will apply their new skills to collect, identify, and analyze samples of duckweed, the small aquatic plants that grow on slow moving streams or ponds.  By focusing on duckweed, they will learn multiple ways of understanding one organism, and will also explore the plant’s ecological importance, including its ability to filter pollutants from wastewater.

“We are going to take advantage of the fact that we are here on the banks of the ole Raritan,” Transue said. “We are going to go out and look at things at a higher level biologically.”