An Eclectic Path to Jewish Studies 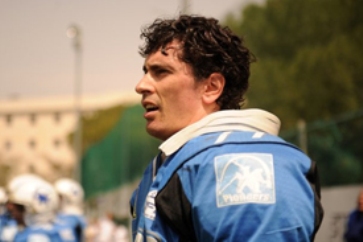 Jason Gosnell has taken a somewhat circuitous route to the Master’s in Jewish Studies program at Rutgers.

There was a stint as an attorney with one of New Jersey’s largest firms. A clerkship with the chief justice of the Israeli Supreme Court. A gig harvesting koi on a kibbutz on the Mediterranean Sea, and some basic training with the Israel Defense Forces.

Did we mention that he also played with the Tel Aviv Pioneers, helping to introduce American-style football to the Jewish state and twice being named all-Israel Football League defensive end?

Now the Toms River native is back on these shores with his Bulgarian-born wife Victoria, a linguistics major at Middlesex County College. He is practicing law – for now – and well into his second semester of graduate school on the New Brunswick Campus. He’s on target to earn a master’s degree by 2013 and a PhD several years down the road, all with an eye to launching a career as an academic.

Gosnell, you should know, has packed all this into 34 years.

A 1999 Rutgers graduate with a dual major in history and political science and a minor in Hebraic studies, Gosnell says the uniting theme of his career trajectory has been a love for the exchange of ideas and a passion for intellectual pursuit.

“Many times as a lawyer, I found that although clients needed answers right away, I wanted to research issues for weeks or months, which was not what the job demanded, or even tolerated,” he says of his decision to re-enter the world of academia. “I always wanted time to find a fuller answer, and that’s what academics do.”

After graduating from Rutgers School of Law in Newark in 2002, Gosnell clerked for James Havey, then presiding judge of the New Jersey Appellate Division, working in all phases of the legal world from constitutional to commercial law. A two-year position with the New Brunswick firm of Hoagland, Longo, Moran, Dunst & Doukas, LLP followed, and a side trip: the Israeli clerkship and the opportunity to see how law is practiced some 6,000 miles away. 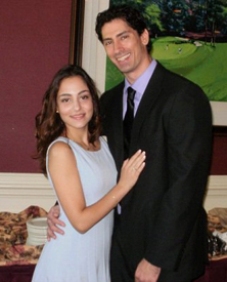 “It’s a very uncommon career path for a lawyer,” he acknowledges. “Generally, you work for a firm, make partner, and then stay until you retire. But I’d fallen in love with Israel in 1998 during a Birthright trip, and I remember sitting in my office thinking: no wife, no kids, no mortgage – why not try exploring something new?”

The position grew out of a policy by Israel’s High Court to offer clerkships to qualified international applicants; the justices traditionally reach out to attorneys in common-law countries such as England, Canada, and the United States, and to civil-law nations such as France and Spain, in order to mine the best legal practices and practitioners, Gosnell says.

During his tenure in Jerusalem, he was struck by differences between the Israeli and American systems of jurisprudence.

Israel has no constitution, he notes – the justices depend on legal precedents from previous court cases to guide the decision-making process, rather than on a written document. And while the U.S. Supreme Court might hear fewer than 100 cases every year, its Israeli counterpart hears thousands.

Before his legal chores began, the Rutgers alumnus worked at Kibbutz Ma’agan Michael in the foothills of the Southern Carmel Mountains, where his sturdy build – 6-foot, 4 inches and 215 pounds -- made him a natural to haul decorative fish like koi at the kibbutz’s fishery.

When it was time to move on, the kibbutz manager offered him a full-time job. Tempting, but …

Among the highlights of what ultimately became a six-year stay in Israel was playing with the country’s fledgling football league, another natural for the one-time pole-vaulter for the Rutgers track team as an  undergraduate.

Despite living a good life in Israel – many friends, a satisfying job with a law firm specializing in bids and tenders, a loving fiancée, that semi-pro football sideline – Gosnell always knew he’d come back to the States sooner or later. Maybe when he had kids, he figured, so the children could get to know their grandparents.

Then his father was diagnosed with esophageal cancer in 2010. Yearning to be with his family here, Gosnell made arrangements to return, and was fortunate enough to find a welcome at his old firm.

But there was always that intellectual imperative, and the desire to explore his Judaism in greater depth.

Gosnell’s return coincided with the launch of the new master’s program in the Department of Jewish Studies in the School of Arts and Sciences. The M.A. curriculum offers an interdisciplinary approach to the study of the Jewish experience from ancient times to the present.

“I see this program as the gateway back into academia for me,” says Gosnell, who in his first semester back on the Banks had a paper accepted at a prestigious graduate-student conference at Carleton University in Ottawa titled “Jewish Spaces/Jewish Places.”