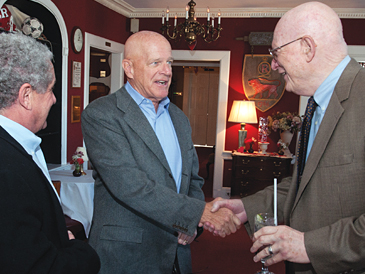 The Lloyd C. Gardner Fellowship Program in Leadership & Social Policy will provide students with the opportunity for sustained engagement with substantial and challenging issues of the 21st century. The topic for the 2012-2013 Program is Democracy and Democratic Revolution.

During his distinguished career as a professor of history in New Brunswick, Lloyd Gardner received considerable professional recognition. But the greatest honor in his academic career, he says, came recently when John Adams, a former student of his, gave the School of Arts and Sciences (SAS) $2 million to endow the Lloyd C. Gardner Fellowship Program in Leadership and Social Policy. Adams RC’65, who took Gardner’s course “Recent American History,” says “Gardner made a lasting impression on me in the way he led us to look at our history in a critical, but constructive, fashion.” For his part, Gardner remembers the mid-60s as a time when the history department particularly benefited from excellent students and scholars.

The two men were reunited for the first time in more than four decades in February over lunch at the Rutgers Club in New Bruns­wick, where they were greeted by Douglas Greenberg RC’69, the executive dean of the School of Arts and Sciences, who broke the news of the gift to a stunned Gardner and also organized the reunion over lunch.

“John Adams is keenly inter­ested in public affairs and the role that Rutgers students can play in our national political life,” says Gardner, professor emeritus and now part-time lecturer in the Department of History. “I very much admire him for this.” The yearlong fellowship is for promising juniors in SAS, inviting them to take part in deepening their understanding of global issues, developing leadership skills, and playing a key role in addressing these issues in years to come.

“He was one of those professors who embedded in us a lasting intellectual curiosity,” says Adams, who had a career as both an attorney and the president of a financial firm and is a part-time lecturer in the Department of Political Science.

The Lloyd C. Gardner Fellowship Program in Leadership & Social Policy will provide Rutgers students with the opportunity for sustained engagement with substantial and challenging issues of the 21st century.  It is a competitive year-long program that gives 12-15 SAS juniors an opportunity to deepen their understanding of major global issues, to develop strong leadership skills, and to take a prominent role in addressing these issues in the coming decades. Program participants will be provided with a $1000 scholarship and research funds.