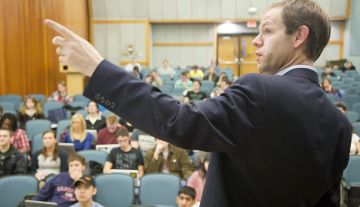 They came to share their experiences as Asian-American students and to help White House officials understand their unique concerns.  They left feeling that they are not alone – far from it – and determined to continue networking with their peers around the country.

“For me, the recurring theme is that Asian-American students are fighting for more recognition and resources,” said Ryan Ramones, a civil and environmental engineering major in Rutgers School of Engineering.  The junior from Parsippany was one of 13 members of a Rutgers delegation, including seven students from the School of Arts and Sciences, that recently took part in the White House Asian American and Pacific Islander Youth Leadership Briefing.

Created by President Bill Clinton and continued by executive order of Barack Obama, the White House Initiative on Asian Americans and Pacific Islanders (WHIAAPI) coordinates efforts of 23 agencies and departments across the federal government to improve the health, education, and economic status of Asian-American communities, some 16 million members strong.

According to Kiran Ahuja, the initiative’s executive director, the briefing was designed to help the Obama administration engage a new generation of advocates to address challenges these communities grapple with, among them poverty, health disparities, and access to language-appropriate services and resources .

“The briefing helped us understand how big these issues are beyond the borders of Rutgers,” said briefing participant Anna Phung of Egg Harbor, a fourth-year sociology major in the School of Arts and Sciences. “There was a lot of talk about issues such as bullying – how to deal with it on campus and how to tackle it on a broader basis.”

Ji Hyun Lee, director of the Asian American Cultural Center at Rutgers, accompanied the 10 students and two other staff members to the day-long event, which included speeches by high-ranking administration officials such as Ahuja and Chris Lu, assistant to the president and Cabinet Secretary for Obama’s executive office.

Founded in 2000, the cultural center showcases the contributions of Asians and Asian Americans through a variety of presentations, exhibits, performances, lectures and seminars.  One in four students on the New Brunswick Campus are of Asian descent, Lee said, or 23 percent for the entire university; she believes that population is growing.

“I wouldn’t be surprised if we soon reach one in three,”  Lee said. And despite widespread perception, she added, it’s a widely diverse community representing dozens of nationalities and languages and a variety of socio-economic backgrounds.

“There is a myth that all Asian Americans are high-achieving and wealthy,” Lee says. “These families do exist, of course, but many Asian-American families don’t fit that profile, which is why we need to educate others and advocate for more assistance and resources.”

Briefing officials arranged a series of break-out sessions to encourage the students to share ideas on such topics as youth entrepreneurship, educational opportunities, immigration, and campus activism.

Phung and Aamir Lalani, a sophomore majoring in economics and African, Middle Eastern and South Asian Languages and Literatures (AMESALL) in the School of Arts and Sciences, attended a session devoted to LGBT and AAPI pride. Among the ideas that emerged was the creation of a website that would serve as a unifying anti-bullying resource for the two minority populations.

“I believe the White House officials and staff were attentively listening to us, looking for feedback, and taking notes,” Ramones said.

The Rutgers representatives said they had not been aware of the work the White House has done, but now they’d like to raise the initiative’s profile on campus, and also work to change immigration policy and reign in tuition rises at public universities.