A Love for Languages and Science Leads Student to Brazil 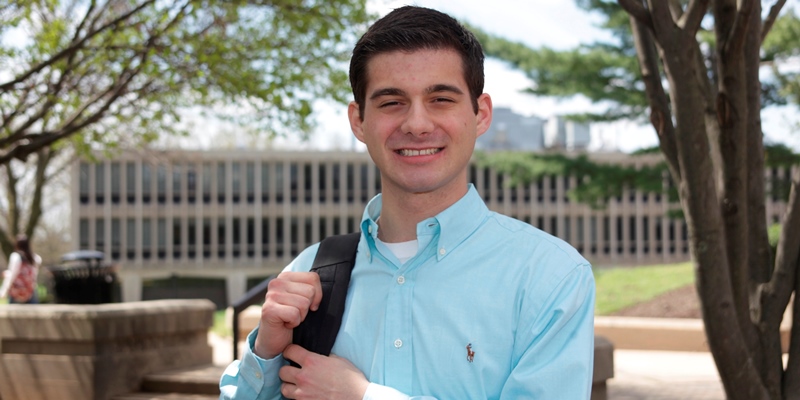 During his first two years at Rutgers, Jacques Karcnik took not only math and science courses, but also Portuguese and Italian. People warned him against spreading himself too thin, saying that he would not be able to merge his interests. But when he was accepted into the National Science Foundation-funded University of Florida International Research Experience for Undergraduates (REU) program to conduct research in Brazil, it was clear that he had made the right choice.

“I found something that hit on all of my interests at once,” he explains.

By the time Karcnik, moved from the Catskills to Princeton Junction with his family as a teenager, he already spoke Spanish, some Portuguese and Italian, and was literate in Hebrew. His facility with languages was thanks in part to his family: his mother and grandmother spoke a language called Ladino, or Judeo- Spanish, which is grammatically based in Castilian Spanish but also incorporates Portuguese, Italian, Hebrew and other languages. The fact that his maternal grandfather spoke eight languages also inspired him. Karcnik had further honed his skills while attending a Hebrew day school. “I was bombarded by languages from all different directions,” he recalls.

His family not only influenced his love of languages, but, ultimately his interest in science—both of his parents and one of his grandparents, studied medicine. Initially, Karcnik wasn’t sure whether or not he would follow a pre-med course, but Professor Asbed Vassilian’s general chemistry course changed his mind. “I sat in the front row of his class every single day for an entire year,” he remembers. “It ended up being my favorite subject. Not only did I love doing the work, but I would go home and watch periodic table of the elements videos every night.”

In his third year at Rutgers, Karcnik said, the class helped him to see “how relevant chemistry is to everything in the world,” and he eventually did decide—with positive input from fellow Rutgers Chemistry Society (RCS) students and advisor John Taylor—to major in the subject.

One day in class, Vassilian announced that there were opportunities for students to do research in Brazil. “That’s when a light bulb went off in my head,” says Karcnik. “I knew I wanted to go.” With the assistance of Professor Larry Romsted and Chemistry Chair Eric Garfunkel, Karcnik got his application in on time. Along with 16 other students from around the country, he was accepted into the three-month program. “I was very proud to be the Rutgers kid in the bunch,” he says.

In April 2010, Karcnik found himself at the Universidade de São Paulo, working with a team of chemists at the Laboritório de Química Fina e Biocatálise, led by Leandro H. Andrade. “Being there was the perfect fit for me,” he says. The undergraduate worked hard to compensate for his limited academic experience. “I was getting into organic synthesis before I even took organic chemistry,” he explains, “and I had very limited lab experience.” But Karcnik shouldered on, helping synthesize compounds that have the potential to stop the growth of carcinogenic tumors.

He also met people from around the world, attended a national workshop on biocatalysis and biotransformation, traveled around the country, and gleaned much information about Brazilian culture. “I’ll never forget how beautiful Brazil was, how fresh and tasty the food was and how easygoing and friendly the people were,” he says.

Though his time in Brazil ended in August 2010, the experiences offered by the program continued. The following March, he traveled to the American Chemistry Society meeting in Anaheim, CA, to present a poster about the synthesis of compounds that contain selenium. In April, he again presented the poster, this time at a symposium at Rutgers.

As for the future, the multilingual science aficionado is leaning toward medical school. But he says that no matter what he decides to do, chemistry will always be a part of his life: “It took me to the other side of the world, and that’s not something that I’m just going to forget. The experience was an enormous gift on the part of everyone who helped me get there, including Larry Romsted, John Taylor and my friends in the RCS. It pushed me ahead in so many ways—culturally, scientifically, linguistically, academically, and confidence-wise.”