Details
copy this then edit 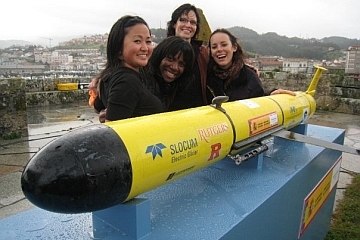 The Mason Gross School of the Arts and the School of Arts and Sciences have established an educational and professional hub for filmmaking at Rutgers.

The Rutgers Center For Digital Filmmaking offers a seven-course certificate program set to launch in spring 2012 with tracks in fiction and documentary filmmaking. Students may begin registering in November 2011. The Mason Gross School, which is the university’s arts conservatory, and the School of Arts and Sciences both offer courses in the certificate program. Offices are in the Civic Square Building and Writers House, both on the College Avenue Campus in downtown New Brunswick.

The center also houses the Rutgers Film Bureau, a professional documentary filmmaking unit whose work, completed on a per-fee basis, serves clients in and outside the university community. In addition, the unit features an archive of film shot at Rutgers.

Dena Seidel, who since 2007 has taught digital storytelling and documentary filmmaking for writers at Rutgers University’s Writers House, has been named director of the newly formed center. Her documentaries have appeared on HBO, ABC, Discovery Channel, National Geographic and The Learning Channel (TLC).

Consider the educational and career possibilities, says Seidel, an award-winning filmmaker: “You could be a biology major and graduate with a certificate in digital filmmaking. Rutgers students have stories they want to tell.”

According to Seidel, the program is meant to be hands-on and production-oriented so that students “leave feeling confident. We need to push kids to make—to risk making.”

Mason Gross Dean George B. Stauffer says that “we have wanted a film program at Rutgers for many years—one that brings together existing courses and resources at the university and combines them with a new production component. I am delighted at the alliance between the School of Arts and Sciences and the Mason Gross School of the Arts that makes such a program possible, at long last.”

“The School of Arts and Sciences is very pleased to launch with the Mason Gross School of the Arts this long-desired program that brings the arts and humanities—and sciences—together through the synergy of 21st-century technology,” Greenberg says. “Providing hands-on filmmaking experience to Rutgers students while enhancing the creative mission of Writers House, this Center moves Rutgers into the digital future.”

FAQ's about the Rutgers Center For Digital Filmmaking