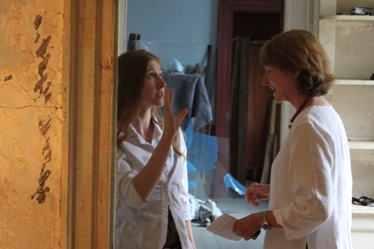 In an old industrial town on the Delaware River, Rutgers graduate student Allison Richard is working alongside residents on a project that is reconnecting the community to its past.

Richard, a student in the Cultural Heritage and Preservation Studies program (CHAPS) in the School of Arts and Sciences, is serving as an intern at the Roseberry Homestead, a landmark late-18th century home in Phillipsburg, N.J., that until a few years ago was boarded up and forgotten.

A restoration effort is under way that promises not only to bring the quarried-stone Georgian manor back to its original grandeur, but also to unearth a trove of information, and spark new research on subjects ranging from Colonial-era architecture to Revolutionary War history.

Perhaps most importantly, the Roseberry revival is stirring up civic pride and generating community involvement in Phillipsburg – a former railroad and canal shipping hub that is working hard to redefine itself for a post-industrial future.

“When you have a movement that’s trying to instill a sense of culture, a sense of pride, and a sense of history, that is something I will always strive to be a part of,” said Richard, who is spending the summer researching some of the manor’s unique architectural features. “That’s what community is all about.” 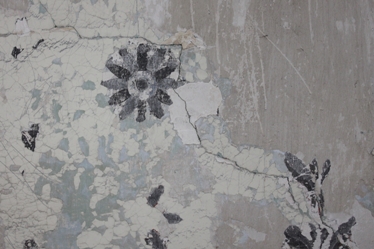 Richard’s work on the project was made possible through a financial gift to the Rutgers University Foundation from the Phillipsburg Area Historical Society. The gift establishes the Scott Curzi Memorial Internship, aimed at developing semester-long, paid internships for CHAPS students.

Curzi was a lifelong Phillipsburg resident who possessed a great love for his community and a deep interest in historical preservation. One night in the spring of 2008, Curzi and a close friend, Frank Greenagel, ventured into the Roseberry Homestead. The windows had been boarded up. The ceiling had caved in, and the floors were littered with debris. But Curzi looked around and saw possibilities. He vowed to restore the house.

Receiving the permission of the Town Council as well as grants from the Warren County Municipal and Charitable Conservancy Trust Fund, Curzi pared down his law practice and set out to accomplish his preservation mission.

But in the fall of 2009, he died suddenly of a heart attack.

“It really was a blow,” Curzi’s friend, Greenagel said. “He was the energizing force. Nobody else could have cared as passionately.”

Yet his legacy lives on. Friends and loved ones made substantial contributions in lieu of flowers to help set up a fund for historical preservation. His family ultimately decided that the fund, which is overseen by the historical society, should be used in part to support CHAPS interns, some of whom will work at the homestead and others who will work in different communities.

Curzi’s children, Justin and Courtney Curzi, said in a statement: “We believe one of the best ways to honor his memory is to assure that young professionals 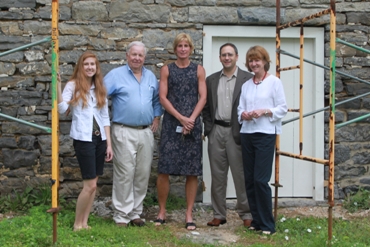 have the opportunity to continue his work of historic preservation.”

Archer St. Clair Harvey, a professor and the director of the CHAPS program, said she’s thrilled by the creation of the internship fund.

“Like Rutgers, CHAPS sees community engagement as a central part of its mission,” she said. “This is where we belong – in the community forming partnerships and collaborating with community groups on projects like the Roseberry Homestead.”

St. Clair Harvey noted that the Roseberry project is ideal because of its potential to yield knowledge in many different areas of scholarship.

“The house is so perfectly put together,” she said. “If you take a house like that, and research it carefully, it teaches you a whole lot about the period. You can look at everything - from the nails to the windows to the walls - it’s like archaeology.”

There is still much about the Roseberry Homestead that is not known, including the exact year of construction. Historians believe the house was built for John Tabor Kempe, the attorney general of New York and British loyalist who fled to Britain following the Battle of Bunker Hill.

Richard, the first intern, is examining the decorative wall stenciling and researching its stylistic roots with an eye toward discovering the specific artist who did the work.

“We are not sure because the artists who would come to work on these houses were typically itinerants,” said Richard, a Flemington native. “So we are thinking it might be someone who was traveling from New England down to Philadelphia and made a stop in Phillipsburg.”

In building up a knowledge base about the stencils, Richard will employ a range of sources and techniques, everything from special computer software to consultations with a nationally-renowned paint analyst and interviews with area historical groups. She will also write a scholarly paper on her findings, and deliver a public lecture in Phillipsburg.

Meanwhile, the renovation is expected to be finished in several years. The manor will become a historical information center and serve as a meeting place for local groups.

Greenagel can already see the project’s impact on Phillipsburg. Residents who had no involvement with the historical society are showing up to volunteer. And, he said, there’s a palpable new awareness of the town’s history.

“It used to be that a lot of people didn’t know there was a historical society,” Greenagel said. “Now the town fathers will refer questions to us. Someone wants to put up a transmitter for cell phones, they’ll ask us: ‘Is this consistent with the historical nature of Phillipsburg?’”

Click here to read about CHAPS students working on the restoration of a centuries-old New Brunswick cemetery.