The 2011 Winter Break for me and nine other Rutgers first-year students was filled with adventure and exploration. We participated in the first International Byrne First-Year Seminar: “Field Study of Volcanoes and Earthquakes in Costa Rica.” 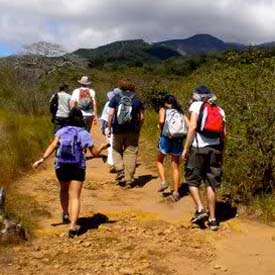 We came from a range of backgrounds and experiences. Some of us were avid travelers and some had never left the United States. Gathering at Newark Liberty International Airport on Jan. 6, we all connected with each other and were excited to embark on our adventure.

The seminar aimed to give students a first-hand look at how geologists analyze the patterns of earthquakes and volcanoes, and introduce the group to the research methods used after collecting data from sites affected by earthquake and volcano trauma.

We were accompanied by Professor Michael Carr and Professor Vadim Levin, two faculty members from the Department of Earth and Planetary Sciences who had previously done field work in Costa Rica. Dr. Kathleen Hull, the director of the Byrne First-Year Seminars also accompanied the group, along with a Rutgers geology graduate student, Pablo Ruiz Cubillo.

Our first stop in Costa Rica was in the capital, San Jose. We were amazed at how beautiful the weather was in comparison to the frigid morning we spent six hours before in New Jersey. For a week, a typical day for us included waking up at 6:00 a.m., packing up, and eating a breakfast of gallo pinto, guava jelly, and delicious fresh coffee. We loaded the rental vehicles (lovingly nicknamed “Thomas the Train” and “The Hummingbird”) and began driving to our next destination.

We hiked volcanoes, drove through unpaved roads, and kept our cameras ready to capture the foreign but infinite landscape with as many pictures as possible.  We shopped in San Jose, drove to the Catarata del Toro, hiked to see a waterfall up close, inspected pieces of tephra (volcanic ash), and met with another geology researcher at Instituto Costarricense de Electricidad.

We learned about the complicated trade-offs Costa Rica must make as a country that produces so much of its own energy from hydropower. Collecting water in lakes puts tremendous pressure on fault lines and sometimes leads to earthquakes. Although it was cloudy, we were lucky enough to see bits and pieces of the steaming crater of Mount Poas, the research subject of Pablo Ruiz Cubillo's latest project. We collected rock samples from outcroppings on Poas, including the site of a recent mudslide, to bring back to New Jersey for analysis and dating.

During the drives that went on for hours, we learned fun facts about Costa Rica. There is no standing army, and citizens receive free healthcare.

Our trip came to a bittersweet end when we drove back to San Jose for our last night in the capital. We stayed up all night talking. None of us wanted to leave Costa Rica, yet all of us were excited to come home and share the experience with our friends and families.

We talked about how lucky we were to know three brilliant, insightful professors, and see a graduate student revel in what he is passionate about. Though we might not all pursue degrees in geology or the natural sciences, we came back with a new appreciation for nature and for the power of the Earth. We also recognized that there are great and many opportunities at Rutgers, as long as we are ready to reach out and find them.

Read more about the Byrne Seminar in Costa Rica by Dawn at Rutgers Student Blogs:  Moments of Clarity