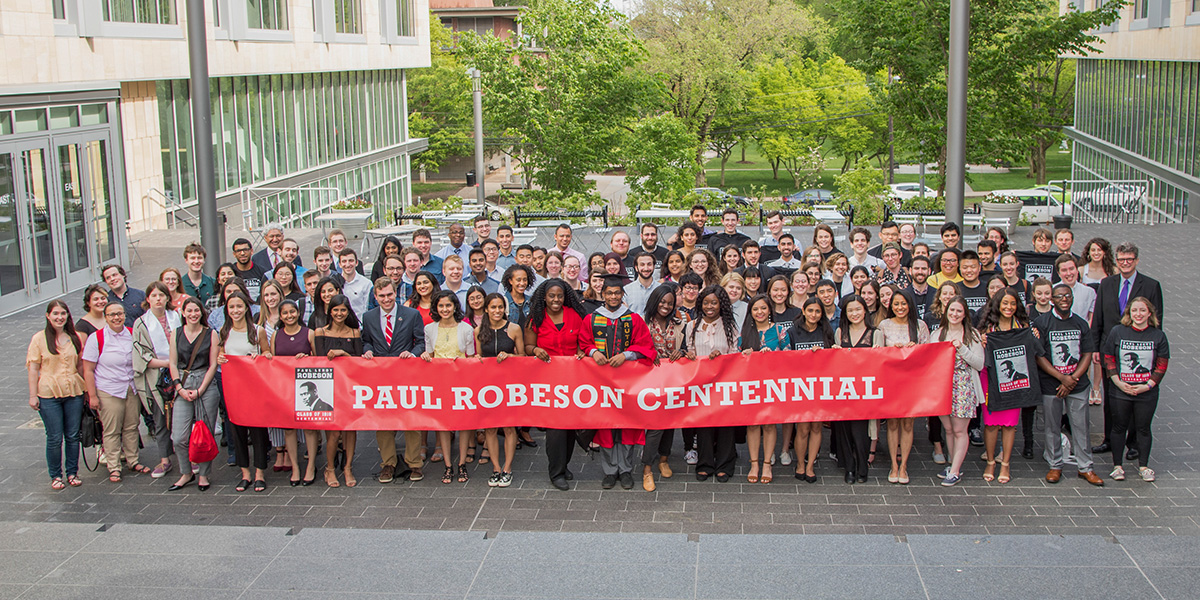 More than 120 School of Arts and Sciences seniors in the Class of 2019 were honored Thursday, May 16 as Paul Robeson Scholars, establishing an enduring connection with one of Rutgers University's most distinguished alumni.

"To be able to stand here and be recognized as a Paul Robeson Scholar is very meaningful to me," said Joshua Cox, the student speaker for the event.  "Paul Robeson was not only a scholar, but also an actor, an athlete, a musician and a human rights activist. He continuously remained true to himself and his morals."

The late-afternoon ceremony in the Rutgers Academic Building, which was organized by Undergraduate Academic Affairs, was part of a yearlong celebration that the university has undertaken to commemorate the centennial of Robeson's 1919 graduation from Rutgers College.

The School of Arts and Sciences has long continued the Livingston College tradition of designating students who complete a senior thesis as a Paul Robeson Scholars. Robeson, an accomplished and extraordinary student, wrote a senior thesis, The Fourteenth Amendment, the Sleeping Giant of the American Constitution, which fueled his famed valedictory address, The New Idealism.

"Students who engage deeply with critical issues as you have done are following in Paul Robeson's footsteps," Arts and Sciences Executive Dean Peter March told students. "As Paul Robeson Scholars, you have conducted research on a topic that’s meaningful in your life, and through this experience you have expanded your knowledge and understanding of the world.

"We look to you to carry this passion and commitment into the world as Rutgers graduates."

"You all have enriched your academic journey here at Rutgers by conducting innovative research," Sifuentes-Jáuregui told the student scholars. "You have developed skills and discovered critical thinking, analysis and creativity."

Also in attendance were members of the Robeson Centennial Committee including the chair, Felicia McGinty, Executive Vice Chancellor of Administration and Planning; Deborah Gray White, Board of Governors Distinguished Professor of History; and Edward Ramsamy, professor and Chair of Africana studies; and Keisha Dabrowski, Division of Student Affairs.

Cox, the student speaker, and a physics major and Africana studies minor, cited Robert Bartynski, professor and Chair of physics and astronomy, as his mentor, and also praised the advising and encouragement he received from Ramsamy, and Jhanna Jean-Louis, assistant director of the Ronald E. McNair Program.

"My fellow Paul Robeson Scholars and I have dedicated over 300 hours towards research in our fields such as Africana studies, sociology, English, physics, and more," Cox said. "Today we celebrate one another for accomplishing this and being successful in our own individual projects."

In his speech, Cox noted that Robeson faced harsh racism at Rutgers.

"Paul Robeson prevailed in the face of bigotry, and we shall be no different," he said. "We shall continue to fight on behalf of our community, succeed beyond the expectations, and speak up for others not because we can, but because must."

At the conclusion of his speech, Cox asked each scholar to pull out the special Paul Robeson Scholar Pin they received at the onset of the event, and have their family and friends “pin” them. As Cox paused at the lectern for the audience to comply, his mother emerged from the audience to pin her son and give him a congratulatory hug.

Please take a look below at the faces of the Paul Robeson scholars and click on their names to learn about research completed by undergraduates from biology to sociology, from English to Russian, from chemistry to physics.