Once a Dream of Science Fiction, a Laser Tweezer Helps a Rutgers Biophysicist Boldly Go Where Molecules Move 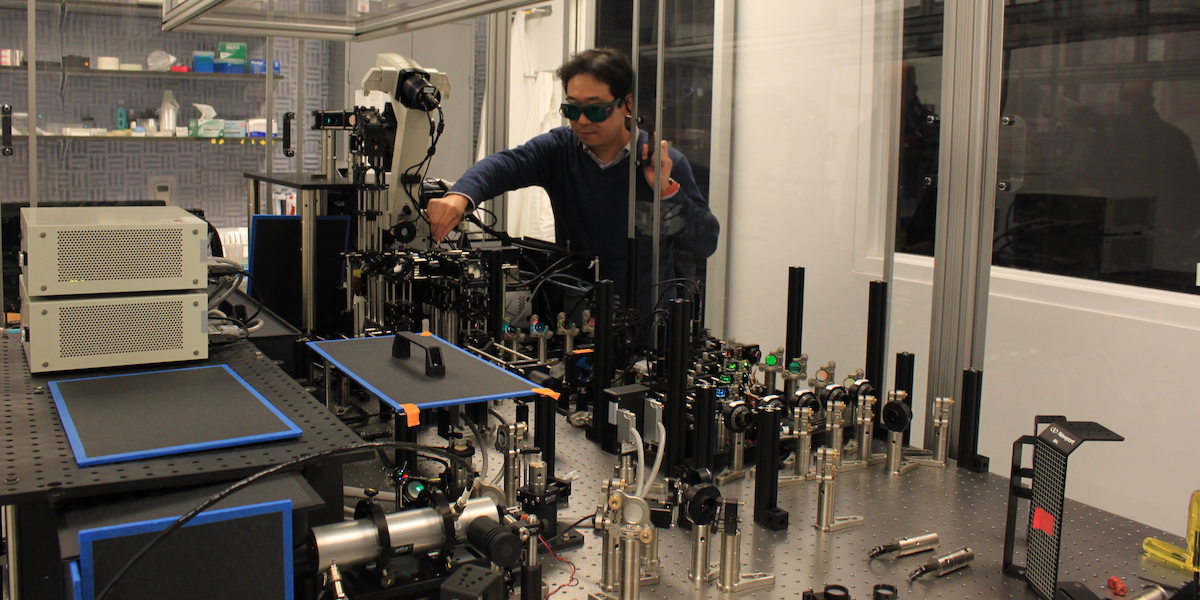 “An old dream of science fiction,” the Nobel Prize Committee said in its praise of the invention.

Like the “tractor beam” of vintage Star Trek episodes others observed.

The futuristic device they’re talking about is optical tweezers.

Invented by Arthur Ashkin, one of three pioneers in laser physics to win the 2018 Nobel Prize in Physics, the instrument uses a focused laser beam to trap, hold, and move microscopic objects that previously had been too tiny to touch. 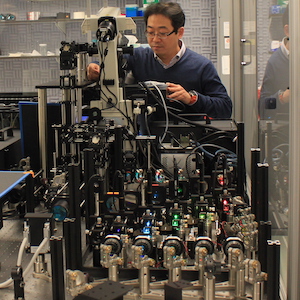 The revolutionary tool is essential to the work of a Rutgers professor who recently brought the technology to the university. Sang-Hyuk Lee, of the Department of Physics and Astronomy, School of Arts and Sciences, has also added advanced microscopy techniques to make the device capable of examining and visualizing molecules at the tiniest level.

He is using the innovative instrument for several federally-funded research projects that combine elements of physics and biology.

Lee’s device allows him to examine live plant cells in “unprecedented molecular detail” for a project that could help break new ground in the development of biofuels. He is also able to generate ultra-high resolution images of neuron development for research aimed at finding improved treatments for degenerative diseases.

For Lee, these multidisciplinary projects reflect the essence of his chosen calling: biophysics.

“A biophysicist is bridging the gap between two worlds,” he says. “What I want to do is understand these complex biological processes using the laws and tools of physics.”

The optical tweezers provide him with the perfect tool for that mission.

The development of optical tweezers goes back decades. Ashkin, who was the head of laser science at Bell Labs in Holmdel, N.J., from 1963 to 1987, set out to build an instrument capable of grabbing particles, atoms, molecules, and living cells with “laser beam fingers,” according to NobelPrize.org. A major breakthrough came in 1987, when Ashkin succeeded in capturing living bacteria without harming them.

Optical tweezers can move and manipulate particles smaller than a micron. A single strand of human hair is about 75 microns in width. 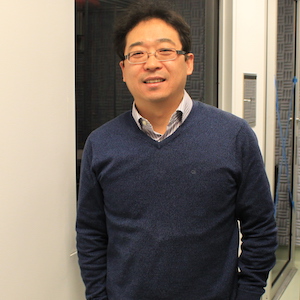 Lee became intrigued by the technology while working on his doctorate at New York University under David Grier, a physicist who created more complex versions of optical tweezers by adding digital holography. Lee was also influenced by, and later worked as a post-doc for Carlos Bustamante, a biophysicist at the University of California, Berkeley, who used optical tweezers to stretch a single DNA molecule to measure the force holding it together.

“His work completely changed my views of biology,” Lee says. “I became determined to understand biological processes through the simple, universal, and beautiful principles of physics.”

After arriving at Rutgers in 2015, Lee designed and built the mammoth instrument that’s now housed within a glass enclosure in a laboratory at the Institute for Quantitative Biomedicine on Busch Campus. The device is far more versatile than commercially available models because Lee integrated a number of advanced optics techniques, including use of multiple lasers, and a technology known as super resolution fluorescence microscopy, which won the 2014 Nobel in Chemistry for producing higher resolution image than what conventional light microscopes could achieve.

“So, we can get super-resolution image of intra-cellular structures while we exert measure force on individual molecules,” he says. “Our instrument is a one-of-a-kind, home-built microscope.”

Physics Chair Robert Bartynski agrees. And he said the application of laser physics to contemporary problems in biology is opening an exciting new chapter in interdisciplinary science. 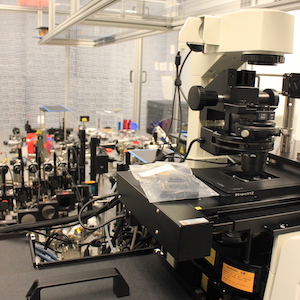 “The optical tweezers technology that Sang-Hyuk has developed at Rutgers give us a singular capability that expands our understanding of how biomolecules move in and around cells to carry out critical tasks,” Bartynski said. “The ability to manipulate and visualize individual molecules with these advanced optical techniques, will give unprecedented insights into the physics behind key biological processes

Lee is principal investigator on a $1.5 million Department of Energy project—with his Rutgers team (Shishir Chundawat, Eric Lam and Laura Fabris), along with collaborators at Vanderbilt University and Oak Ridge National Laboratory—that seeks to understand how cell walls in plants are formed—knowledge that may accelerate the development of genetically engineered crops for use as renewable fuels and have broad impact on molecular and cellular biology fields in general.

He is also involved in a National Science Foundation-funded project—with Nada N. Boustany, a Rutgers professor of biomedical engineering serving as principal investigator—that could help improve treatments for degenerative neural diseases or nerve injury due to trauma.

Lee describes his research focus as "single-molecule biophysics," the study of individual biomolecules to understand how they carry out their functions in living cells.

“The application to important biology problems is still in its infancy,” he says. “This emerging field has tremendous potential.”