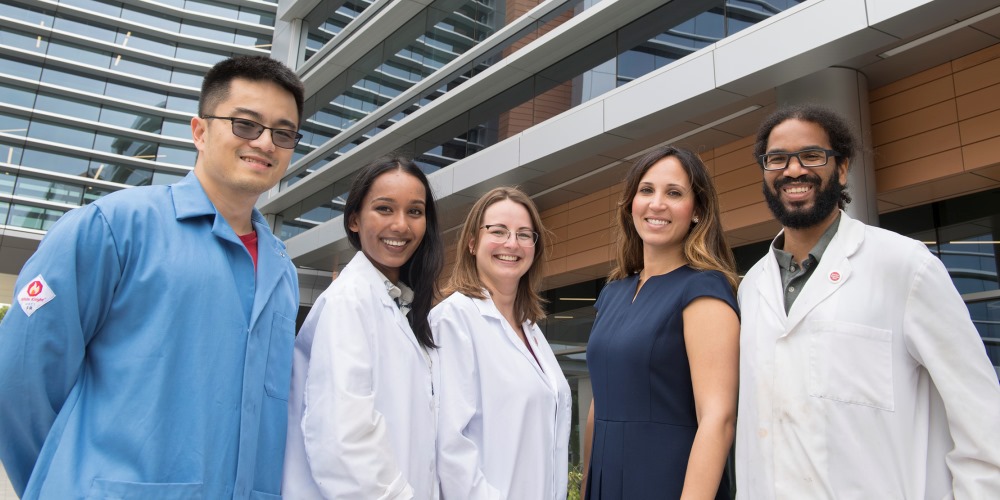 The official opening of the new Chemistry and Chemical Biology Building on September 14 brought together several generations of Rutgers University chemistry scholars, from idealistic graduate students to veteran professors to retired pharmaceutical executives. 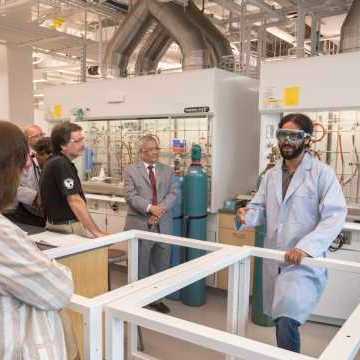 They all agreed that the state-of-the-art facility on Busch Campus will launch a new era in research and education for Rutgers.

“We’re already feeling the impact in our work flow,” said Tariq Bhatti, a fourth-year graduate student after the ribbon-cutting ceremony. “It’s led to a dramatic enhancement of our efficiency.”

Bhatti, a member of professor Alan Goldman’s research team, came to Rutgers after five years working in the chemical industry. His research involves developing catalysts that support sustainable production of chemicals such as fuels and fertilizer.

“I was really drawn to Dr. Goldman’s work and its potential for improving the quality of life for society and humanity,” Bhatti said. “Our mission, succinctly, is to design catalysts to produce society's most important chemicals more directly, using less energy, and with less waste.”

About 50 people attended the event, which included tours, ice-cream chilled by liquid nitrogen, and remarks by Rutgers President Robert Barchi and other university and state officials. 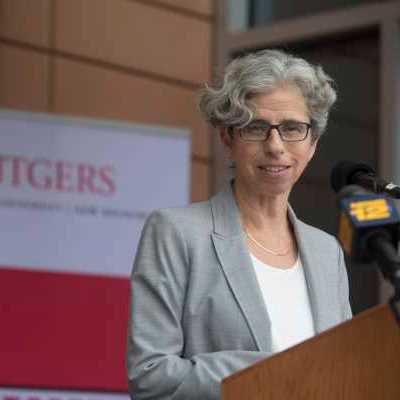 “This is a great building and it’s a great department,” Barchi said.

The Department of Chemistry and Chemical Biology in the School of Arts and Sciences educates nearly 6,000 Rutgers–New Brunswick students every semester, drawing pre-med, engineering, and pharmacy students among many others. The four-story, 144,000-square-foot facility will provide teaching space while enhancing the department’s research, which has applications in human health, drug design, alternative energy, biomaterials, nanotechnology and other fields.

“Chemistry is central to the big issues that are facing today’s society,” said Jean Baum, chemistry professor, and SAS vice dean of research and graduate education, who also spoke at the opening. “Chemistry is important in mitigating the effects of climate change, and to developing drugs for neuro-degenerative diseases that are affecting our aging population.”

The department had long outgrown its space at the Wright-Reiman Laboratories adjacent to the new site. The $115 million project was funded mostly by New Jersey’s 2012 Building Our Future Bond Act. 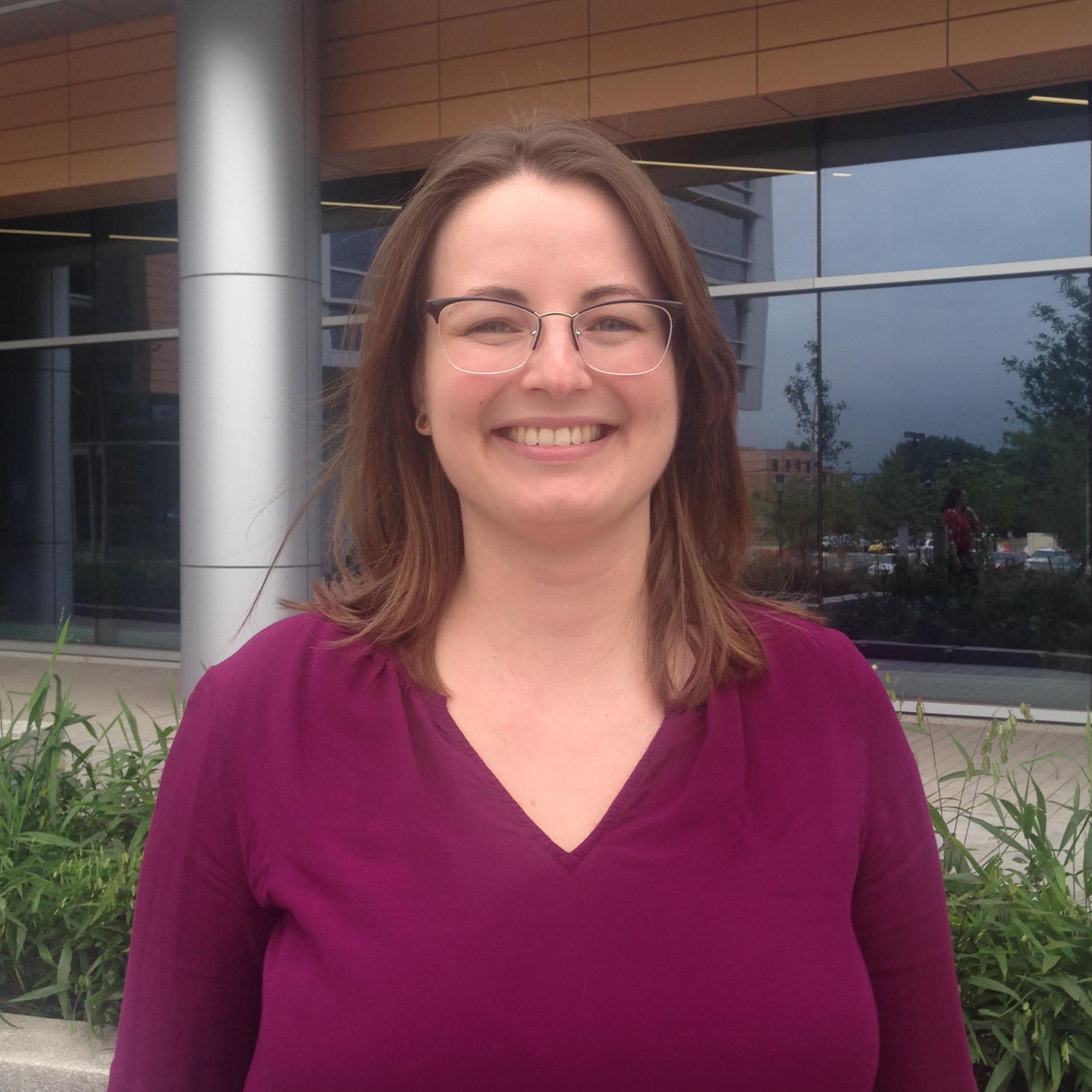 Graduate students working in the laboratory of professor Charles Dismukes said their team is ecstatic after moving into the new facility in early September.

“The research here at Rutgers is right up my alley,” Teeluck says. “I have such a respect for nature and the way it works, I feel it is our responsibility to take care of it.”

Dean Cheung, a graduate student in the lab of professor Ki-Bum Lee, said the team is breathing a sigh of relief in the new building.  At its former location in Wright-Reiman, Lee’s team was spread out over nine rooms on different floors and wings. 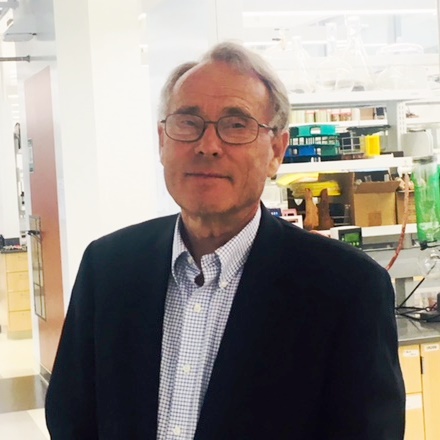 “To do a cell culture, you’d go to the first floor, but to image those cells you had to go upstairs to room 289,” Cheung said. “Then to get to our chemistry room, that was on the third floor.

“It was very long and tedious and you can’t imagine the improvement in having one consolidated space.”

Cheung said the work of the lab involves using nanotechnology for biomedical applications, such as stem cell therapy and cancer therapy.

The official opening on Friday had special resonance for Cheung. He had defended his dissertation on Thursday.

The new building also impressed members of an older generation, who attended the opening.

Ulf Dolling, who earned his doctorate from Rutgers in 1972 after moving from Germany, and who then built a long career at Merck Research Laboratories, marveled at the pristine labs. He recalled being a teaching assistant and holding classes in Quonset huts.

Roger Jones, a chemistry professor at Rutgers since 1977, and who was involved in the planning for the building, agreed.

Besides the increased space, he noted that the new building has sophisticated new instrumentation and technology, including a mass spectrometer that can examine very subtle interactions of large molecules. And that type of analysis is very useful to researchers examining the causes of neurodegenerative illnesses such as Parkinson’s and Alzheimer’s.

“Overall the space is very impressive and puts Rutgers and the department in a very good position,” Jones said. “I think it’s outstanding.” 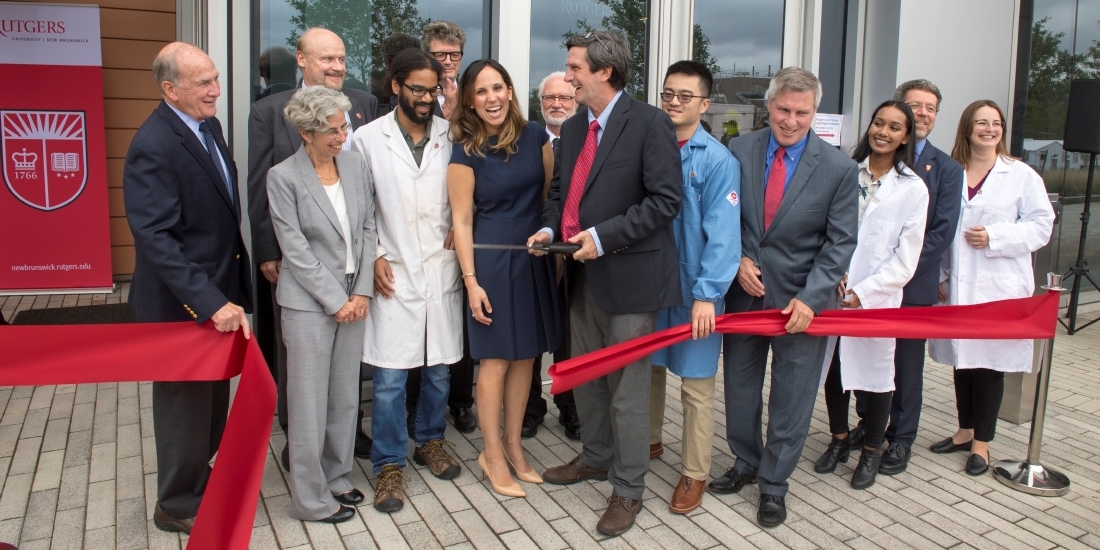