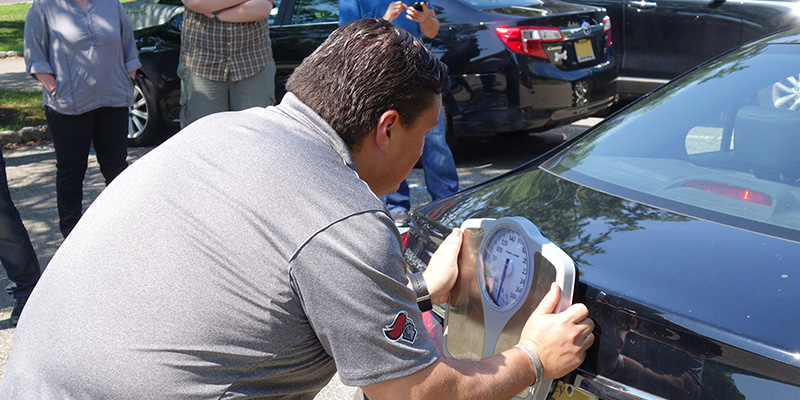 It was an unusual sight to see on Rutgers University’s Busch Campus.

A group of people were holding a bathroom scale while pushing a car across a parking lot. 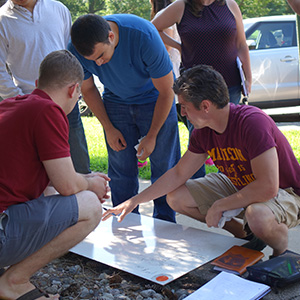 The participants were New Jersey science teachers who were learning bold new ways of teaching a subject that many students might dread: physics.

Zeman was among a select group of high school teachers who spent four weeks at a summer program organized by the Department of Physics and Astronomy in the School of Arts and Sciences (SAS), and the Graduate School of Education (GSE).

The teachers returned to their classrooms last week, armed with new knowledge and techniques that are sure to intrigue—and inspire—their students.

“I am always looking for ways to do things better in the classroom,” says Luis Largo, a Madison High School teacher who received his master’s degree in physics education from Rutgers in 2007. “After 10 years, you can fall into doing things the same way, and this was a tremendous opportunity to break out and get exposed to some exciting techniques that are based on the latest education research.” 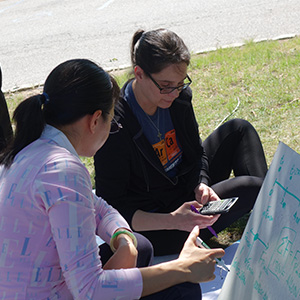 The program, directed by Rutgers physics professor Amit Lath, draws its ideas and inspiration from Eugenia Etkina, an education professor who oversees the physics teacher preparation program in GSE and works closely with the physics department in SAS, where she is a member of the graduate faculty.

Etkina has long been a proponent for change in science education, arguing that the acquisition of knowledge alone isn’t enough to develop scientifically literate students.

One of Etkina’s former students, Matthew Blackman, now a physics teacher at Ridge High School in Bernards Township, designs and runs the program, guiding teachers through various activities and exercises. 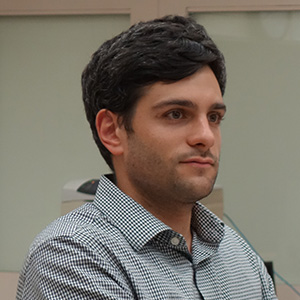 “The shift we’re seeing is away from the quantitative toward mastery of the ideas on a deep level,” says Blackman, who was an undergraduate student in the physics and astronomy department and received his master’s in physics education in 2009. “When you master the ideas, the problem-solving comes pretty naturally out of that.”

In the car-pushing exercise, the participants used the readings off the bathroom scale to determine how much force they were exerting on the car, and then used that information, with Newton’s Laws, to calculate the total mass of the car. In another activity involving toy cars, Blackman replaced the battery in one car with aluminum foil so that it went slower than the other, making it a challenge to predict where and when it would collide with another car.

Teachers like Courtney Macdonald said the program was fun, inspirational, and enlightening.

“The activities were great because they provided very visual examples of physics principles,” said Macdonald, who teaches at the Middlesex County Academy for Science, Mathematics and Engineering Technologies. “And meeting the other teachers gave me the opportunity to learn about how they teach, what they think is important, and how to get it across to students.”

For more information on the Physics Education Summer Training Program, visit its webpage.