Reaching Out to People Living with a Devastating Injury

Wise Young opens up lab to patients and their families

Charlene Lightcap had never been to Rutgers. But one Friday night she drove from her Delaware home to the Nelson Laboratories building on Busch Campus.

Her mission was personal. Wise Young, School of Arts and Sciences professor and one of the world's foremost experts on spinal cord injury, was holding an open house in which he'd discuss his efforts to help patients recover and walk again.

Lightcap, whose daughter Renee was paralyzed in a car accident several years ago, had no idea what to expect.

Yet minutes after stepping off the elevator, she found herself shaking hands with the noted neuroscientist.

"Hi, I'm Charlene, and my daughter Renee is quadriplegic," she said.

She joined about 40 others at the W. M. Keck Center for Collaborative Neuroscience, where Young serves as founding director, and holds open houses that include a tour, film, and a lecture that starts with the basics of spinal cord injury and moves to the latest treatments.  (Details for planning your visit are at the end of the story.)

It's an extraordinary outreach to people living with a devastating injury. Spinal cord injury blocks communication between brain and body, leaving patients paralyzed and needing help with everyday tasks such as eating, dressing, and going to the bathroom.

Several people showed up in wheelchairs: a man hurt in a motorcycle accident, a teenager injured in a diving accident, and a young boy struck by a truck. Accompanying them were loved ones seeking support, hope, and a bit of good news.

"People are hanging on the edge of their seats for information about treatments," says Mary Ann Matakitis, a Morris County mom whose son Daniel was struck by a truck when he was five. "Until I discovered the Keck Center, I felt locked out from that information." 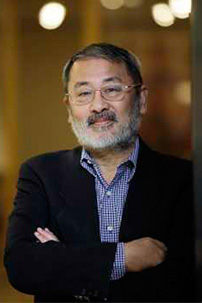 Young has an affinity for the visitors that goes back to his days as a neurosurgeon at Bellevue Hospital. One day a high school wrestler was brought in with an injury that paralyzed him from the neck down. For Young, a former wrestler himself, it was a shattering moment that pushed him to leave hospital care and devote his life to finding a cure.

"I was tired of telling people 'there's nothing we can do,'" said Young, who holds the Richard H. Shindell Chair in Neuroscience in the Department of Cell Biology and Neuroscience.

Young guides the audience through the evolution of his research, culminating in clinical trials he has organized in China in which patients take lithium and receive transplants of umbilical cord blood mononuclear cells. In recent trials, subjects received the treatment as well as intensive walking training. Within a year, 75 percent could walk with minimal assistance using a rolling device, he said. Young now wants to expand those trials to India, Norway, and the U.S.

"It is time to show that therapies work in people," he said.

For visitors, the Keck Center is an inspiring place, not only for its research, but its strong message of empowerment. Cabinets and shelves are at reachable heights, and coolers are outfitted with transparent doors on each side. 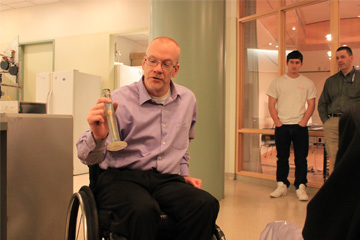 Giving tours is Jim Bennett, program coordinator, himself in a wheelchair from a fall two decades ago. He met Young at a fundraising dinner and was won over by a simple gesture Young made as they started a conversation.

"He actually got down on one knee so we could look each other in the eye," Bennett said. "I was quite moved."

Lightcap, who had come from Delaware, left feeling she had gained new knowledge as well as a new support network. She hopes to return with her daughter.

"These people really care," she said. "I love this place."

World-renowned scientist Dr. Wise Young holds open houses nearly every month at the Keck Center to give an update on spinal cord injury research and clinical trials. Lab tours are ongoing from 5:00 to 6:00 pm; the program begins at 6:05 pm. Lecture followed by time for questions. People with spinal cord injuries, their families, health care professionals, students, and any with interest in spinal cord injury are invited to this free event. RSVP not needed. Free parking in lot 56 in front of Nelson Labs. Questions? Email SCIProject@rutgers.edu or call 848.445.6573.