Emeritus professor of Physics Peter Lindenfeld has developed innovative teaching methods over the course of five decades that appeal to aspiring physicists as well as to students intimidated by the subject.

Few science courses can inspire dread and anxiety in students like physics.

Even physicists say so.

"You go to parties and you mention physics and people say 'Oh that was the worst course I ever took in my life,'" says Gordon Aubrecht, a 1965 Rutgers College graduate and a physics professor at The Ohio State University.

These days, fear of physics has inspired books, websites, and academic conferences.

But in the 1950s, a young scientist at Rutgers, Peter Lindenfeld, was already developing innovative teaching methods that appealed to aspiring physicists as well as to students intimidated by the subject.

"I've always tried to balance the scientific with the humanistic," says Lindenfeld, a warm, chatty, and down-to-earth professor emeritus. "And I tried to find that balance right from the start."

Over the course of five decades, Lindenfeld worked to demystify physics, reaching out to high school teachers, establishing masters programs for aspiring teachers, and, perhaps most importantly, adopting a teacher/mentor role in which he touched the lives of countless students, many of whom, including Aubrecht, went on to distinguished careers as physicists.

Physics gives you the insight into how the world works

"I still think of him as really my biggest mentor as an undergraduate, and maybe even in life," says Aubrecht.

"He's one of the most influential people in my life, almost at the same level as my parents," adds
Milind Kunchur, a professor at the University of South Carolina, who received his Ph.D. from Rutgers.

Now, a new graduate fellowship in the School of Arts and Sciences is celebrating Lindenfeld's legacy while helping to support current students. The Peter Lindenfeld Graduate Fellowship in the Department of Physics and Astronomy was started with a gift from an anonymous donor and will support a graduate student who exemplifies the teacher-scholar model of learning that Lindenfeld pioneered.

Lindenfeld, who was born in Austria and fled with his family after the Nazi annexation, arrived at Rutgers in 1953. He has long believed that physics can communicate profound knowledge about the world to the layperson as well as the scientist.

"Physics gives you the insight into how the world works," he said. "How is the world organized? How are its pieces held together? When you look at physics this way, it makes you want to learn about it."

But he said too much rote learning and emphasis on formulas can obscure physics' beauty.
As a teacher, he was an innovator who liked to experiment with different approaches.

When you look at physics this way, it makes you want to learn about it.

Kunchur, who had Lindenfeld as his thesis advisor in the 1980s, recalls observing Lindenfeld's classes while waiting to meet with him. 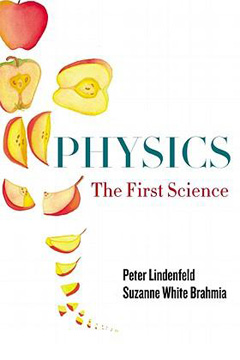 "I'd peek through the window," he said. "There was so much interaction going on. He places importance on every individual. Everybody feels like they know him personally."

"He talked about famous physicists in a way that seemed like he had actually met them and knew them," Aubrecht said.

Lindenfeld retired in 1999. But he hasn't stopped teaching physics. He co-authored a widely-acclaimed textbook with Rutgers colleague Suzanne White Brahmia, Physics, the First Science (Rutgers University Press, 2011). The book was praised for its engaging, conversational tone and strong emphasis on narrative.

Indeed, the book's opening passage neatly sums up Lindenfeld's view of physics by declaring that "The world is a wonderful place," and then expressing hope that the reader will be able to "see it more fully, both the aspects that are visible and those that are hidden."