Researcher Follows Smokers to Get at the Root of Addiction

Why is it so hard to quit smoking?
Danielle E. McCarthy, a psychology professor in the School of Arts and Sciences, looks for answers in places that other researchers overlook: the day-to-day stresses and struggles of smokers trying to kick the habit.
McCarthy has electronically “followed” hundreds of smokers during their attempts to quit, developing real time information on the psychological and emotional triggers that weaken their resolve and push them into lighting up.
“We’re interested in the specific factors that keep people smoking—not what made them start as teenagers,” says McCarthy, who runs a smoking cessation laboratory at the Rutgers Institute for Health, Health Care Policy, and Aging Research in downtown New Brunswick. “What is it exactly that happens when people quit that so reliably leads them back to smoking?”
By asking such questions, McCarthy and her research team may help spur the development of innovative psychological interventions in a field increasingly dominated by medication  from over-the-counter nicotine patches and gum to prescription drugs such as bupropion.
Cigarette smoking remains the leading cause of preventable death in the United States, accounting for more than 440,000 deaths, or one of every five deaths, according to the Centers for Disease Control and Prevention.
And the relapse rates are daunting: Some 95 percent who can quit for a day go back to smoking within 3 months.
In McCarthy’s studies, participants use palm pilots or cell phones to communicate several times a day during the time leading up to quitting and for up to a month afterward.
Those transmissions open up a window on some of the specific struggles smokers face as they move through their day without nicotine, everything from the frequency and potency of cravings to the specific times and places lapses occur.
“The risk of having that first lapse changes across contexts that include who you are with, where you are spending your time, what your stress level is,” McCarthy said. “We want to understand how all of these factors come together, and we think that will help us inform better treatment.” 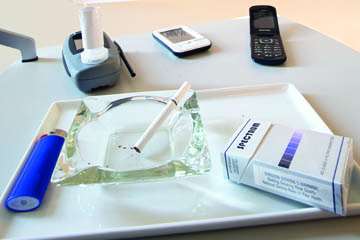 Since joining the Department of Psychology in 2006, McCarthy and her team have studied nearly 400 smokers, and are currently analyzing large data sets and preparing to publish new reports about their findings.
One of the underlying themes of her work is the role of emotions.
At the University of Wisconsin-Madison, where she earned her doctorate, McCarthy worked with an advisor on an emotion-based model to explain addiction. Simply put, she said, addicts learn that quitting their drug of choice unleashes a flow of negative emotions, and so over time their addictive behavior becomes second-nature.
“So if you are a really good smoker, you don’t think about why you need to smoke, because it is so automatically woven into your day,” McCarthy said. “And that makes it really hard to change it.”
But those insights, she added, also open the door for bold new approaches to treatment.
“What it tells us is that maybe we ought to help people find other ways to modulate their negative and positive emotions, to make it more tolerable to quit, and to help to sustain that motivation to quit over time,” she said.
McCarthy received the 2012 Emerging Researcher Award from the New Jersey Psychological Association.