Surrounded by Science, a Sculpture Rises at Rutgers 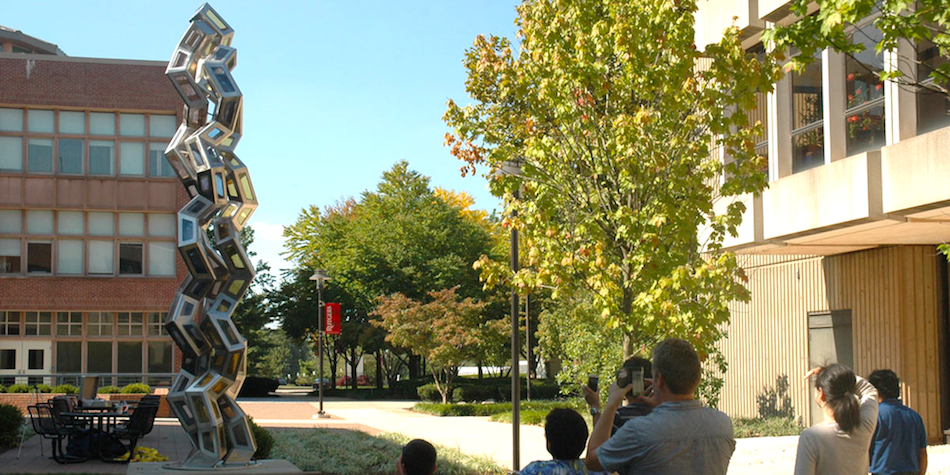 The presence of cutting-edge science is hard to miss on Rutgers University’s Busch Campus.

The Piscataway, N.J. campus is home to many of the university’s major science departments, schools, and centers, lending a high-tech, ready-for-the-future aura to the landscape.

Now the campus has become home to a striking work of art – a sculpture that draws strong connections to the university’s life science research.

The 20-foot, 3,200-pound steel and glass sculpture resembling  the most abundant protein in the human body was erected in September outside the new Center for Integrative Proteomics Research as a symbol of the facility and a tribute to its founding director, Helen M. Berman.

The sculpture was formally unveiled September 26, coinciding with a symposium honoring Berman, who is a Board of Governors Professor of Chemistry and Chemical Biology in the School of Arts and Sciences.

The university commissioned Oregon-based Julian Voss-Andreae, a scientist-turned-sculptor, to create the sculpture, which he has entitled Synergy.

The sculpture’s long, wavy strands of tubular steel - interspersed by some 200 tinted glass windows - emulate the Collagen molecule, which makes up the human body’s tendons and ligaments, and supports the skin and internal organs.

"My goal is to create something beautiful that works as art for the audience even without scientific knowledge," says Voss-Andreae.  "When people realize that this sculpture reflects one of nature's major building blocks, it can help break down the divide between art and science."

The proteomics center was opened in December 2011 to foster interdisciplinary research into complex bio-molecular phenomena. Rutgers has long been known for its work in proteomics, which is the study of proteins. The university operates the US arm of the Protein Data Bank (PDB), a global repository that gathers data on the 3D structures of proteins and nucleic acids, and makes this knowledge  universally available via the internet.

Berman, who serves as director of the PDB, said she has long admired Voss-Andreae’s work.

“While science is my passion, I'm very much a fan of the arts and am particularly interested in pieces that intersect between the two fields,” Berman said.  “I've been aware of Julian's work for quite some time, and have always found his sculptures to be strong and powerful.”

She added that it’s a perfect fit for the new research center.

“Collagen's 3D structure is very simple and elegant--three strands, with a repeating sequence of a few amino acids,” Berman said.  “In this sense, collagen symbolizes how I view science in general, and why this sculpture is such a great fit for Proteomics.  It represents the search to understand complexity through simplicity.”