Helping N.J. Schools Teach the Lessons of the Holocaust 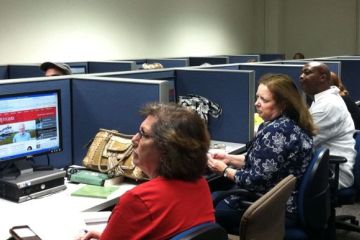 Willie Miller is a public school teacher in the predominantly African American community of East Orange.

Meir Tannenbaum, meanwhile, is a principal at an Orthodox Jewish high school in Dallas.

On the surface, it may seem unlikely that the three educators would ever have the opportunity to meet, let alone spend time studying together.

But for one intense week in June they were among a group of 25 middle and high school teachers that gathered at Rutgers to study, discuss, and learn new ways of teaching their students about a daunting and difficult subject: the Holocaust.

The teachers had enrolled in the university’s Master Teacher Institute in Holocaust Education, which trains teachers in Holocaust studies, providing the expertise they need to return to their districts and share their knowledge in classrooms, auditoriums, and community centers.

The institute, a program of the Herbert and Leonard Littman Families Holocaust Resource Center, is under the auspices of the Allen and Joan Bildner Center for the Study of Jewish Life in the School of Arts and Sciences.

“This course is one of the few opportunities teachers have to study the history of the Holocaust in an intense and chronological way, and at the same time learn innovative ways to bring it to the classroom,” said Karen Small, associate director of the Bildner Center who coordinates the program. 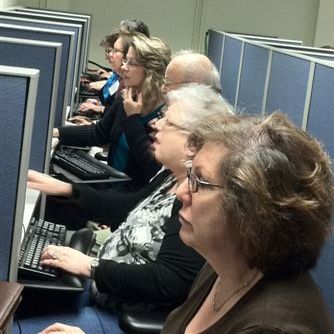 The one-week summer session was introduced this year to complement a longer program that takes place during the academic year. Over the course of five days, participants delved deep into the history of the Holocaust through lectures, readings, films, and a special new online application that makes video testimony from survivors available to classrooms.

“There are so many ideas I can take from this and apply in the classroom,” said Miller, who teaches world history at East Orange Campus High School. “Watching the survivors’ testimonies, in particular, you just get a sense of their dignity, and their resilience. It’s just a fantastic lesson in the power of the human spirit.”

Observing the program was Egon Berg, a 75-year-old Bergen County resident who was a toddler when his family fled Germany in 1939.

Berg, who attended Rutgers in the 1950s and went on to become a prominent patent lawyer, has, with his wife, Marge, provided financial support for the institute.

“My concern is when the survivors are no longer here, the voices of the naysayers will become louder and louder,” Berg said in an interview. “It’s so important for young people today to learn what happened. Genocide is still going on in the world today.”

The program examined the Holocaust from many angles and perspectives, extending far beyond the rise and fall of Adolf Hitler. One lecture, for example, dwelled on the massacre of hundreds of Jewish townspeople by their neighbors in a small Polish community - the subject of the book Neighbors by Jan T. Gross. The course readings also included excerpts from Christopher Browning’s Ordinary Men: Reserve Police Battalion 101 and the Final Solution in Poland.

“Hitler was one man, and it took millions on the ground to make it happen,” said Jessica Anderson Hughes, Ph.D. a lecturer in the History Department and the class instructor for the institute. “Just focusing on Hitler creates this simple equation, and my concern is that young people can then say ‘We don’t need to worry about this today because Hitler was a madman.”

Besides the lectures and discussions, the teachers spent time in a Scott Hall computer lab where they received training on IWitness, a program that provides access to 1,000 of the video testimonies of Holocaust survivors from the University of Southern California Shoah Foundation Institute’s visual history archive.  The archive, holding over 52,000 testimonies, is only available to users at select institutions, including Rutgers.

By mid-week, teachers were already mulling over lesson plans to transmit what they’ve learned. 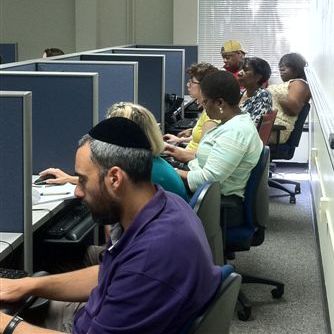 Feury-Gagnon, a teacher at the Academy of Our Lady, a pre-K -8 school, said she plans to teach the historical facts of the Holocaust and also use it as an opportunity to talk about the moral implications for humanity in the 21st century.

“It’s very important that the students recognize their role as not just passive,” she said. “We would be asking ‘What are you going to do about this? Who are you in this story of your own life?

Tannenbaum, an associate principal at Yavneh Academy, said his goal was to provide historical background for his students prior to a trip to the Auschwitz site in Poland.

“I know a lot of the stories and the religious, emotional aspects of the Holocaust,” he said. “But I needed to get the historical, statistical background, and a way of presenting it in the classroom style.”

In addition to the background, Tannenbaum said he received something he hadn’t expected: access to a network of fellow teachers with whom he can stay in touch and compare notes.

“One of the most fascinating things about this is I have always only discussed the Holocaust with other Jews,” Tannenbaum said.  “I had never even heard of other perspectives.”