The opening of a new research center is making Rutgers a world leader in a field that promises bold advancements in human health.

The Center for Integrative Proteomics Research, a four-story, 75,000 square-foot facility on the Busch Campus, was dedicated last month and will eventually house scholars from across multiple disciplines and departments at Rutgers.

Proteomics is the study of the structures, functions, and interactions of proteins. Accordingly, the center will have an array of sophisticated instruments, including nuclear magnetic resonance spectrometers and X-ray crystallographic equipment that can determine the structures of molecules and proteins at the atomic level.

“This is a new era in the history of chemical, biological, and biomedical research at Rutgers,” said Kenneth J. Breslauer, Dean of Life Sciences in the School of Arts and Sciences, who helped oversee the project.  “This magnificent new building integrates an impressive array of research programs and high-tech facilities.”

Rutgers President Richard L. McCormick, speaking at the dedication, said the proteomics center is a testament to the level of excellence that the university has attained in biomedical research.

“A quarter century ago, this university made a commitment to become a truly outstanding research university, one whose faculty are among the best in the field, and that is certainly true of the fields represented here today,” he said. “With the completion of this building, we can integrate the university’s academic and research work on proteomics and enable Rutgers in the years ahead to play an even stronger and more dynamic role in this field.”

Proteins and nucleic acids are known as “the building blocks of life,” and are responsible for making cells function in all living things. Everything from the immune system to thought and emotion are related to these structures.

“Your skin, hair, and heart are all functioning because your proteins are doing their job at the molecular level,” Breslauer said. “They are the machinery of the body and by understanding them, we will understand more about how the body functions and how it malfunctions.”

Ultimately, proteomics could lead to advancements in medicine by increasing the ability of scientists and healthcare providers to zero in on each patient’s unique biological profile. 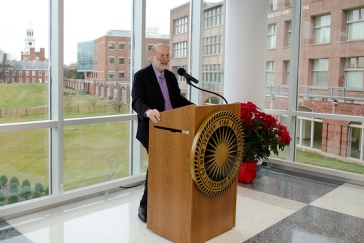 “Such diagnostic empowerment is the first step towards developing personalized medicine,” Breslauer said. “Individualized therapeutic approaches will be developed based on a patient's genetic and proteomics profiles that target the specific causal agents of a disease, rather than just using broad spectrum antibiotics."

Rutgers is already widely known for its work in proteomics. The university administers the Protein Data Bank (PDB), a worldwide repository that gathers data on the 3D structures of large biological molecules, and makes the knowledge universally available via the internet.

The data bank, which is under the direction of Board of Governors Professor of Chemistry and Chemical Biology Helen M. Berman, will serve as the intellectual center of the new facility.

Berman noted that the new facility will allow all aspects of the “proteomics pipeline” – from initial studies to the wealth of data in the PDB­­ – to be housed under one roof.

“So much important research in proteomics has been happening all over Rutgers,” Berman said.  “It will be exciting to see the types of research that can happen when everyone sees and works together on a regular basis.”

The new facility will also house the BioMaPS Institute for Quantitative Biology, which connects biology research and education with the mathematical and physical sciences.

And the center will include such equipment as cryo-electron microscopes, mass spectrometers, and state-of-the art facilities for computational biology.

The strategic importance of the proteomics center to the future of Rutgers is apparent in its location, which is close to related research facilities such as the university’s Center for Advanced Biotechnology and Medicine, as well as the Robert Wood Johnson Medical School, which has many joint programs with Rutgers.

Part of the plan for the proteomics center is to recruit a scientist who will develop clinical applications and build strong relationships with other institutions, both inside and outside of the university community.

“This entire project has been shaped by the recognition that advances in biomedical sciences require the melding of life sciences expertise with the physical, mathematical, engineering, pharmaceutical, and computational sciences,” Breslauer said. “It’s at the interface of these diverse yet interrelated disciplines where cutting-edge biomedical discoveries will be achieved.”