Unforgettable Interviews with Survivors Capture the Many Dimensions of the Holocaust 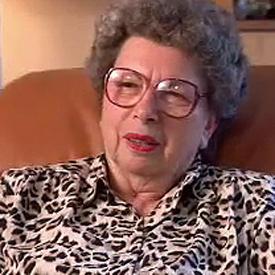 The words pour out in equal measures of anguish and relief:  in English, of course, but also in Italian, Spanish, Norwegian, Croatian, even Japanese, American Sign Language, and 26 more tongues.

The speakers are Jewish survivors of the Nazis’ murderous rage, but also homosexuals, political prisoners, survivors of unspeakable eugenics experiments, Roma and Sinti, participants in war-crimes trials, and liberators of the concentration camps.

Now, thanks to a gift from the Righteous Persons Foundation, scholars at Rutgers will have direct access to those words, as the USC Shoah Foundation Institute makes available on campus thousands of recorded interviews from its vaunted archives.

“Eventually, no survivors will be alive – no one who even knew a survivor will be alive,” said Douglas Greenberg, executive dean of the School of Arts and Sciences, who will participate in a seminar to help faculty and graduate students across multiple disciplines explore ways to incorporate the newly available videotaped interviews in their teaching and research.

Rutgers is one of a handful of American universities whose academics will have direct access to the material, which includes compelling reminiscences from 52,000 people who experienced the Holocaust first-hand.

The archives are available to anyone connected to the Rutgers computer system on any of the campuses.

Founded in 1994 by Steven Spielberg after his phenomenally successful Schindler’s List, the USC Shoah Foundation Institute for Visual History and Education sent volunteers to 56 countries to capture these memories before they died out with the passage of time.

With the coming of the archives to Rutgers, Greenberg re-establishes the link he has with the institute, which he served as executive director just before coming to New Brunswick as dean in 2008.

Running about two hours on average, the interviews offer an intimate portrait of what life was like immediately before, during, and after the Shoah, the Hebrew name for the Holocaust. They represent a perspective that goes far beyond traditional history, Greenberg said.

“Survivors don’t talk about the same things historians talk about – that’s why there’s much we can learn from them,” the dean said, noting that the “incredibly broad spectrum of memories includes everything from café society in Paris in the 1930s, to the relationship of the Italian Church to Italian Jews, and intergroup relations in post-World War I Ukraine, to say nothing of the process of rebuilding lives around the world in the aftermath of the Shoah.”

It’s one thing to read in a textbook that the Nazis exterminated more than half of Europe’s Jews, Greenberg said; it’s another to watch as a frail woman remembers, haltingly, her fear and confusion as she got off the train at the death camps at Auschwitz- Birkenau.

The October 15 faculty seminar introducing the archives to the Rutgers community is sponsored by the School of Arts and Sciences; the Allen and Joan Bildner Center for the Study of Jewish Life; and the Rutgers University Libraries. Organizers stress that the interviews add new understanding in disciplines as diverse as psychology, language studies, anthropology, sociology, and geography.

“This is a major resource for the university, which can be studied from so many different perspectives: Jewish life before and after the Holocaust, the impact of trauma, issues of immigrants’ experiences, memorialization, and the study of languages,” said Yael Zerubavel, director of the Bildner Center and moderator of the faculty seminar.

She has incorporated the introduction to the archives and discussion of testimonies into her current graduate course on cultural memory.

“We’re hoping this is a resource that becomes very broadly used,” said Greenberg, noting that the technology is easy to master, and that staff and faculty members who are already trained in its use will offer hands-on demonstrations during the faculty seminar.

In addition to the faculty seminar, the Bildner Center is sponsoring a workshop to introduce New Jersey public school teachers to the uses and potential of the archives .