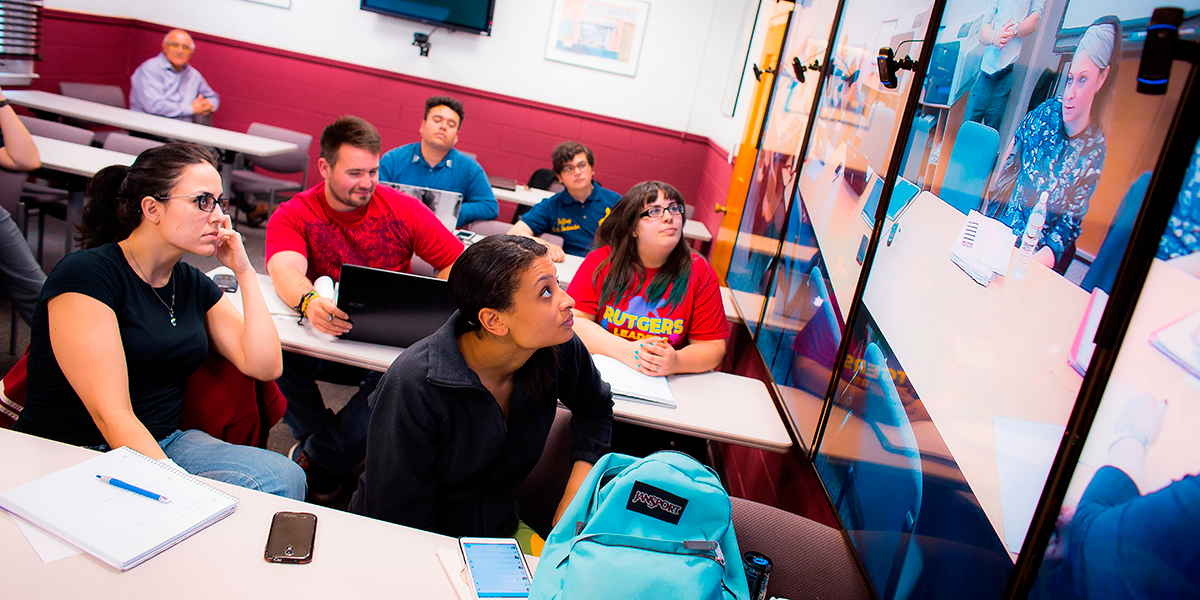 When Luciane Castilho declares, "Olá classe," her students at Rutgers University–Newark crack open their books and laptops and begin conversing in Portuguese.

Some 30 miles away, students at Rutgers University–New Brunswick respond, "Olá," and jump right into the conversation.

"Professor Castilho might seem like she's far away in Newark, but as far as we're concerned, she's right here interacting with us in New Brunswick," says Maximiliano Goiz, a School of Arts and Sciences (SAS) senior who took Castilho's course, "Portuguese for Business and Commerce," in the spring 2015 semester.

Indeed, from their classroom at the Institute for Global Languages, where a 12-foot-long video screen nearly covers one of the walls, Goiz and the other New Brunswick students are able to fully participate in the class as it unfolds in real time from Newark. They can make eye contact with their Newark counterparts, raise their hands and be called upon, and hear every nuance and inflection of Castilho's expert Portuguese dialect.

This high-definition exchange is accomplished through an innovative video conferencing system set up in both locations, allowing both the Newark and the New Brunswick students to seamlessly interact with each other.

The overall effect is startling in its clarity, as if the two groups are communicating across adjoining classrooms.

"When it comes right down to it, the distance is in your head," says Michelle Goncalves, who minored in Portuguese in the Department of Spanish and Portuguese in SAS. "When the teacher calls your name, she's right there, and you have to engage."

The system, called VideoWall, was developed by the Department of Computer Science in Arts and Sciences with a vision for fostering unprecedented connection and collaboration across the expanse of the Rutgers community—everything from bridging the campuses in New Jersey to helping researchers communicate across continents.

"Rutgers is not only diverse in people, we're diverse in the geography that we cover," says Doug Motto, a project manager in the department who helped design the system. "Rutgers is global, and what we're trying to do is to increase interactions between groups across that global expanse."

"The goal is really to make distance irrelevant," Martin says. "Ideally, you should walk into the room and interact with people and not notice that the wall is there."

While various communications technologies have emerged to connect remote users, Motto says the Rutgers system, consisting of off-the-shelf consumer electronics tied together by sophisticated software developed by the department, is unique in its relative low cost, ease of use, and sharp resolution.

"You can just walk in and use this system," he says. "You don't have to wear a wireless microphone or a have a special whiteboard. It's made for the average person."

Castilho, who has taught languages for 20 years, says she was impressed by her experience. During the very first class of the semester, she arranged the seats in her room at Newark so that she and her students were seated facing the cameras—and the New Brunswick students.

"The way I planned the course was for New Brunswick to be interacting with Newark all the time," she says. "Brazil has a growing tech industry, so I wanted the course to be very active, very busy, with sales presentations and negotiations going back and forth. 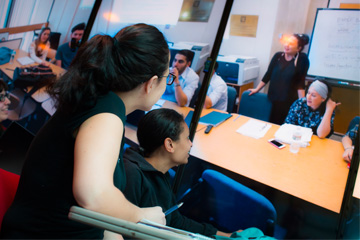 "With the VideoWall, this all became very realistic and very lifelike."

New Brunswick students, meanwhile, said they appreciated the connection to Newark, with the city's rich Portuguese and Brazilian culture. They also were able to take a course normally not offered in New Brunswick, and receive credit toward their degree.

"I thought this was a great opportunity to interact with the Portuguese department in Newark, says Jenifer Elizondo, a sophomore in the School of Arts and Sciences.

It's precisely those opportunities for exchange, Motto says, that make VideoWall valuable and increase its appeal across Rutgers.

This fall the Political Science Department has begun using the system in its new M.A. in United Nations and Global Studies, which holds classes in New Brunswick and Manhattan. This project earned funding support from the SAS Entrepreneurial Award Program. Meanwhile, the Department of Psychology is using the system on Busch Campus to hold joint seminars with the Aidekman Research Center in Newark.