Two Unforgettable Days of Poetry and Politics at Rutgers

Coming together to celebrate the power of political poems 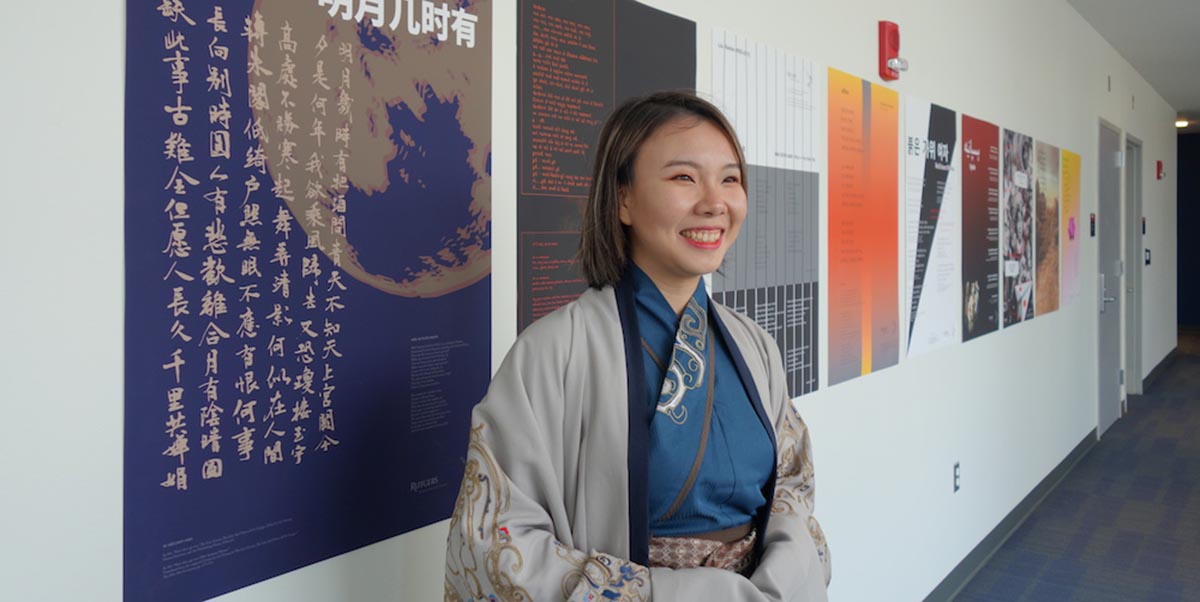 The first-ever Poetries–Politics colloquium at the School of Arts and Sciences drew students, staff, and faculty from across Rutgers University–New Brunswick and transformed the Rutgers Academic Building into a place of art, culture, and intellectual conversation.

The two-day event, presented by the French Department, featured exhibitions, readings, lectures, and performances that celebrated the power of political poems across many languages and cultures.

"We had many people show up—students, scholars, poets, and administrators— saying they had never attended an event like this before," said Mary Shaw, a professor of French and the principal organizer of the event. "That was gratifying.

"But even more importantly, my students were completely engaged and want to continue working on this project for their own enjoyment and intellectual development."

The centerpiece of the event, which took place earlier this month, was the exhibition of beautifully designed posters that covered the walls of the academic building, displaying a poem in its original language and translation. Students in the School of Arts and Sciences selected the poems, sought out accurate translations, and wrote design briefs about the works that were submitted to students at the Mason Gross School of the Arts who produced the posters.

"I learned a lot about research and I learned a lot about collaboration," says Kim Peterman, a senior majoring in classics and English. "We'd pick out a poem that was political in some way, research the original language and translation, write out the history and the visual elements and send those off to the Mason Gross students." 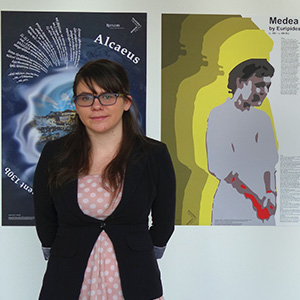 Students were often drawn to poems that had personal or cultural relevance. Naima Ouhamou, who grew up in Morocco and speaks Arabic, chose the poem Cholera  by the Iraqi poet Nazik Al-Malaika, which focuses on the 1947 epidemic in Bagdhad. She also chose Will of Life by Tunisian poet Abu al-Qasim al-Shabbi, a work that inspired protesters during the Arab Spring of 2011. "These are well-known poems in Arabic, each one expressing a deep yearning for justice that is universal," says Ouhamou, who is majoring in French and human resources management.

Tianqi Ying, a student from China, marked the day by dressing in traditional Chinese robes and discussing her choice of a work by medieval poet Li Qingzhao, regarded as China's greatest woman poet.

Also on display on the same floor, was a work by Liu Xiaobo, the Chinese dissident and Nobel Peace Prize winner who died this year after years of imprisonment. His words on the poster are beneath straight lines almost as if they too are in prison. "It communicates the oppression," says Ying, who is majoring in food science and nutritional science while minoring in French.

The posters impressed Harriet Davidson, a professor of English who walked through the exhibit after she finished her teaching.

"It’s always a challenge to know precisely how to get poetry to the people," said Davidson, who in 1997 organized the Rutgers conference Poetry and the Public Sphere. "But it seems to me that having posters with poems that people might look at and experience is a very good idea.”

Both days began with multicultural breakfasts and closed with performances by: Sidikie Jhabaté, a griot from Sierra Leone and Guinea; Jhonel, a slameur from Niger; the Rutgers poetry collective Verbal Mayhem; and the Latin American group Rebel Diaz.

The Poetries–Politics colloquium and exhibition were organized by the Department of French in collaboration with numerous other humanities departments in the School of Arts and Sciences, as well as the Center for African Studies, the Center for Latino Arts and Culture, the Center for Women in the Arts and Humanities, the Jane Voorhees Zimmerli Art Museum; the Rutgers University Libraries; and the Department of Visual Arts at Mason Gross School of the Arts. It has also received support from Global Rutgers and the Office of the Senior Vice President for Academic Affairs.