A Humanities Course at Rutgers Gets Students Thinking about the Unthinkable

“The Coming Apocalypse” explores the human response to troubled times 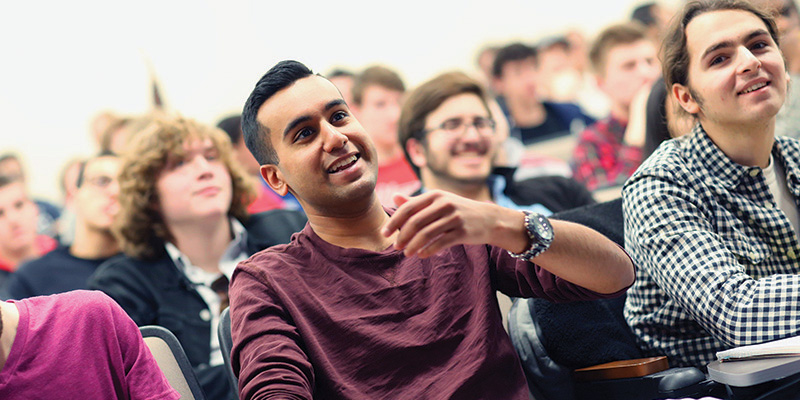 The name of the class is “The Coming Apocalypse.”

And while that title might conjure up images of bioterrorist attacks or a nuclear strike, this edgy new Signature Course is as focused on how humankind responds to traumatic events and troubled times as it is on the actual threats.

The course, introduced in the spring of 2016 by English professor Richard E. Miller, explores the end of the world as it’s imagined in a selection of challenging and disturbing books and films, from the 18th-century classic Sinners in the Hands of an Angry God to the 2015 movie and Wall Street exposé The Big Short.

The sermons, novels, and movies provide a foundation that Miller uses to examine our own anxious and uncertain moment in the early 21st century, a time when fear of terrorism, threats to the environment, and economic upheaval dominate the headlines, fuel the political discourse, and inform our personal experiences. 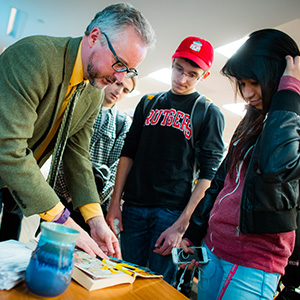 Because it was not offered this semester, the course couldn’t examine the reaction to the election of Donald Trump as the 45th president of the United States. But Trump's campaign—in which he promised to build a wall along the border with Mexico and to restrict Muslims from immigrating to the US—sparked its share of class discussions.  Indeed, more than one student handed in final extra credit projects that explored different versions of a "Trumpocalypse."  The course will be offered again in the fall 2017 semester.

“One purpose of the course is to get the students to see that the narratives connect in profound ways to the history of our moment,” Miller says. “It’s a course where you can talk about prevailing fears. But then what’s the response to the fear? Is there a response other than being afraid and feeling powerless?”

One of the novels—Zone One by Colson Whitehead—gives students a terrifying glimpse of what panic and powerlessness might look like in latter-day Manhattan, where an infection has turned people into zombies, and authorities employ military means to restore order as well as erect a giant barricade.

Miller connected Zone One back to the 9/11 attacks and used it as a way to discuss the bombings in Belgium as well as the campain rhetoric among Republican presidential candidates.

School of Arts and Sciences Signature Courses are foundational courses covering topics of grand intellectual sweep and enduring importance. Other Signature Courses focus on issues such as the environment, food policy, and energy. Two new ones—“The American Dream” and “Religions Now: 21st Century Controversies”—were introduced in the fall of 2016 by the American studies and religion departments respectively.

For Miller, designing and teaching “The Coming Apocalypse” provided a way to rethink and reassert the role of the humanities, a theme he wrestled with in his book Writing at the End of the World (2005, University of Pittsburgh).

“We tell ourselves and our students about the power of reading and writing while the gap between the rich and poor grows greater, the Twin Towers come crashing down, and somewhere some other group of angry young men is at work silently stockpiling provisions for the next apocalypse,” Miller writes. “How might reading and writing matter in the new world evolving right before our eyes?” 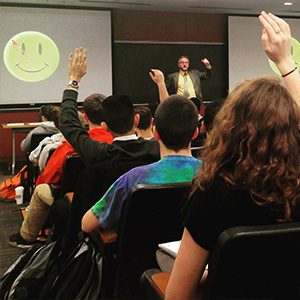 In “The Coming Apocalypse,” which drew some 200 students, he answers that question, in part, by exposing the class to an updated and unorthodox literary canon, introducing the critically acclaimed graphic novel Watchmen; Whitehead’s zombie novel; and films like Apocalypse Now, Invasion of the Body Snatchers, and Rosemary’s Baby. At the same time, Miller assigns classics like Heart of Darkness and insists on a traditionally rigorous approach: quizzes every class, a no-technology rule during lectures, and mandatory participation.

“Studying the humanities is a contact sport,” Miller tells students. “The goal isn’t ‘being right’; it’s about developing a richer interior life.”

Students who thought the class might be easy quickly discovered otherwise.

“It’s a lot of intensive reading, with quizzes and writing assignments in every class,” says junior Solomon Kam. “I’m learning to read novels in a different way—to see the connections to our world.”

“At first I thought Zone One was going to be all about zombies,” she says. “But it actually connects to real life in a way that I didn’t think was possible. You think about how humanity is now, not about the gore.”

Another novel, The Circle by Dave Eggers, showed students the dark side of their tech-centric world by depicting a society shorn of all privacy under the influence of a giant technology company.

“That was eye-opening,” says sophomore Christopher Hartley, a computer science major. “The book goes into how we make our entire lives completely open and completely public through social media.”

Hartley says the course struck a nerve that spurred him to channel his own creative energy. For his final project, he wrote an intriguing short story in which humanity as we know it is merely a computer simulation.

“I had the idea for the story in my head but didn’t quite know how to express it,” Hartley says. “This class gave me the tools to put it on paper.”

Another sophomore, Matthew Rotolo, produced and acted in a short video for his final project about two men wandering in the post-apocalyptic wasteland, with one eventually murdering the other.

“The guy you assume is a protagonist ends up killing a man who is living the same life he’s trying to,” Rotolo says. “I think that is the true apocalypse.”

Miller says the high quality of the students’ work shows the course made an impact.

“One of the greatest joys is seeing what students create on their own in response to the course,” he says. “I just marvel at what these students can do when you set out a situation that invites them to engage with the most important questions of our time.”

Learn more about "The Coming Apocalypse" and many other Signature Courses.