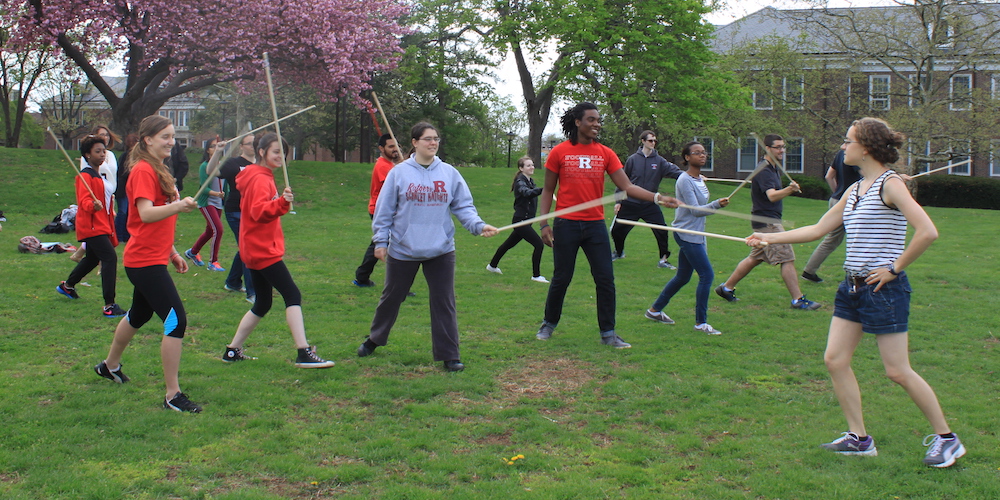 Food, theater, and film are all part of the experience

What better way to communicate the joys of French?

On Rutgers Day 2014, as scores of people walked through campus, checking out dazzling displays of science, technology, and art, professor Mary Shaw was ready with this question: “Would you like to take a cheese test?” she asked passersby on Voorhees Mall.

Standing behind her, a handful of undergraduates and a fellow faculty member from the French department speedily sliced mounds of cheese into bite-sized pieces to be placed on toothpicks.

The “cheese test,” better known as “Fromage Frenzy,” a Rutgers Day staple attraction, challenges participants to sample five types of cheese and then identify them based on written descriptions.

At day’s end, more than 600 people had taken the test, consuming nearly five kilos of cheese.

“This is one part of French culture that everyone loves,” Shaw says.

But the spirit of French fun did not end at Rutgers Day. Nor was it limited to cheese.

The department in the School of Arts and Sciences held its first-ever French at Rutgers Week to coincide with Rutgers Day, continuing for the following week with poetry readings, film screenings, and even a Renaissance fencing demonstration. 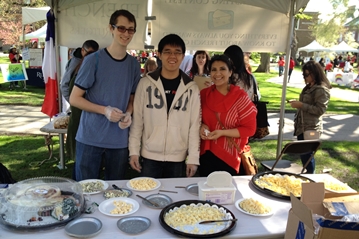 The stylized showcasing of French culture provided a glimpse into French studies at Rutgers, where professors are known for their scholarship but also for their fun, hip, and creative approach to teaching about all things French.

“We strive to be original,” says professor Carole Allamand.

“French filmmaking tackles so many serious subjects,” Stornetta says. “It’s wonderful to be able to study it at Rutgers.”

At the department’s core is a deep commitment to literature.

“Many of us are active writers,” said Allamand, a published novelist. “Our strength and originality is a deep involvement with language, fiction, and storytelling.”

That strength draws students like Jennifer Smith, a 2014 SAS graduate who majored in English and minored in French.

“My French minor really helped me develop as a writer,” she says. “I was exposed to so many great authors and I also came away with an understanding of French theater.”

The department has long been ahead of the curve. Rutgers was the first public university in the U.S. to partner with France’s most celebrated museum, the Louvre. This year the French faculty is unveiling a new winter intersession program – three weeks in Aix-en- Provence for students with limited French experience.

Mark Busch, a 1964 Rutgers graduate and a prominent New Jersey attorney offered an additional advantage to majoring in French.

“I fell in love with the language and culture,” Busch said. “And I soon discovered that reading, analyzing and expressing ideas in a language not your own is superb preparation for law school.”