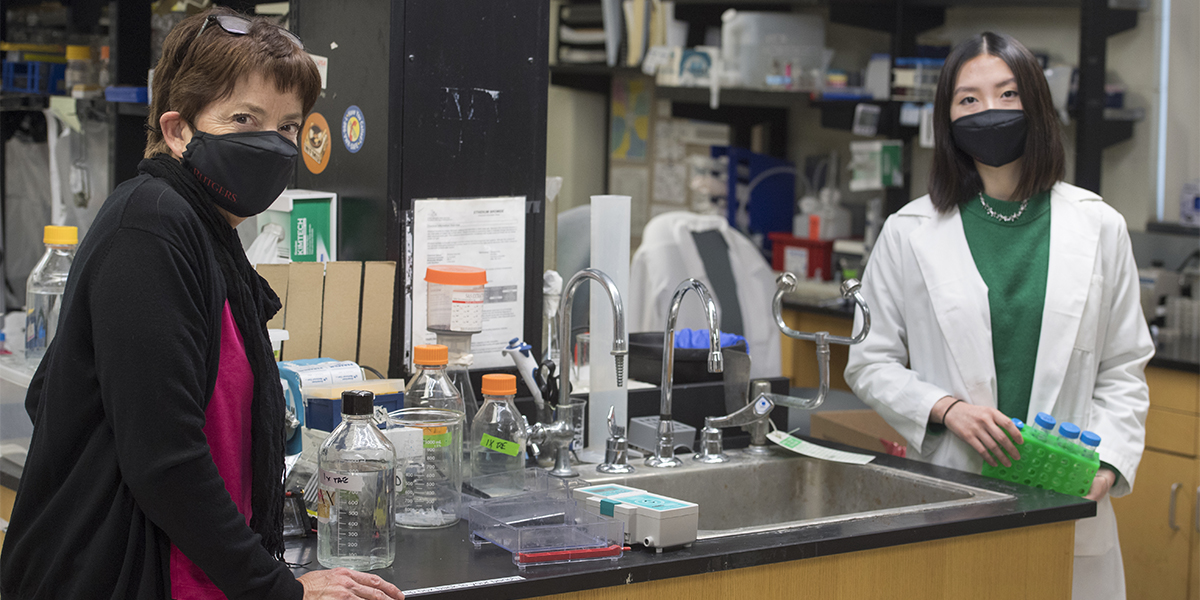 After decades of investigating the molecular mysteries behind aging and disease, Monica Driscoll last spring faced a puzzling new problem.

How would her team of nearly two dozen researchers—comprising one of Rutgers University’s largest and most prominent science labs—continue its work during Covid-19?

Driscoll, a molecular neuro-geneticist in the School of Arts and Sciences, seeks to discover the ways in which humans might extend healthy lifespan. Her research cuts across an array of topics—including Alzheimer’s Disease and ALS—drawing extensive federal funding from the National Institutes of Health. 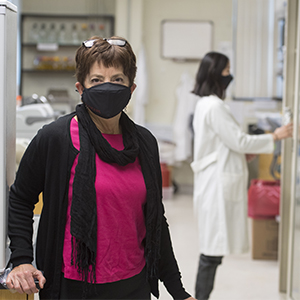 It’s not a job that can be handled over Zoom.

Yet over the last year her team has worked out a system that allows experiments to continue while respecting social distancing protocols. Researchers stagger their lab time across day and night and have spread out through the Nelson Biological Lab building on Busch campus, while also finding innovative new ways to work online.

“We figured it out,” Driscoll says. “We bring people into the lab in ways that they can avoid each other. It is not easy. It takes mega-organizing. But we made it work.”

There are plenty of bumpy moments and acts of improvisation. Lab manager Mary Anne Royal had to drive home with a package of worms to ensure the sample was shipped. Lab assistant Elaine Gavin, facing disrupted supply chains, is often on the phone tracking down new sources for everyday lab materials. And at Thanksgiving, Driscoll had to forgo her tradition of bringing in a chocolate turkey for members to devour, opting instead for turkey-shaped lollipops.

“Little things like that challenge our connection to one another,” Driscoll said. “In a group where we have a common purpose, we work hard, but we also have fun.” 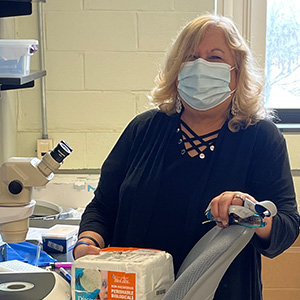 The close-knit internal culture, which has informed the lab’s success over decades, was especially vital over the last year.

“This lab is more cooperative than competitive,” says Royal, who has worked with Driscoll for more than 20 years. “Faced with this incredible challenge, we did what we always do: We talk to each other, we collaborate, and we figure it out.”

Driscoll, a Douglass College graduate, is a Distinguished Professor of Molecular Biology and Biochemistry. She did her post-doc at Columbia University, studying under 2008 Nobel Prize in Chemistry recipient Martin Chalfie.

“In a beautiful way she exemplifies the passion for science that we all feel,” Royal says. “Monica wouldn’t notice if the walls blew down in her office as long as she could keep doing science.

“This year has been all about finding the way to do what we love in spite of another hurdle.”

In carrying out its research mission, the Driscoll lab uses high-end, advanced equipment, like a laser microscope that cuts nerve cells in animal specimens. Yet the actual subject of the experiments might come as a surprise to those outside the sciences. 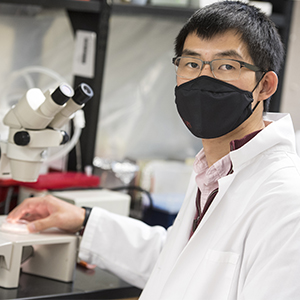 The intense focus is directed toward a two-millimeter worm, known as C. elegans.

Researchers perform genetic engineering on the worm, observing its movements and examining the behavior of its neurons. In 2019, Driscoll sent 3,600 of the creatures into outer space aboard the SpaceX Falcon 9 rocket to the International Space Station to study muscle decline.

“The way we approach our fundamental interest in aging and neurodegeneration is through this tiny worm,” Driscoll says. “We can use genetic tricks to find the mutant that cures its own disease, and then we have the tools to figure out how it did that.”

“I am looking at how their neurons respond,” said Chuang, a post-doc. “How do they mitigate the danger?”

Julie Li, an SAS senior, said she was drawn to the team in part because she had a relative with dementia. 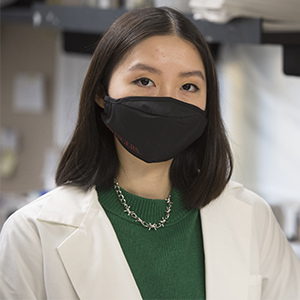 When the pandemic struck New Jersey, the lab scrambled to shut down, and a host of experiments were lost. Some desperately tried to save their projects, working alone in the building around the clock. The team regrouped remotely and began figuring out a plan.

As Rutgers began allowing labs to reopen at partial capacity, the team developed an extensive calendaring system where people reserve their bench time as well as specific pieces of equipment. There is a strict one person per bay policy, with tarps hanging between workstations. Lab members work out their schedule with their neighbor.

“Instead of having researchers look at each of the thousands of cultures under microscopes in the lab, we photographed the cultures and made the images available online,” Driscoll said. “Then our media technicians, who had never really seen the worms before, learned fast how to recognize what we were searching for.”

Because the team already had its share of night owls, the calendaring system succeeded.

“I've always been a mid-afternoon to late-night worker, while my bay mate is here earlier in the morning,” says graduate student Joelle Smart. 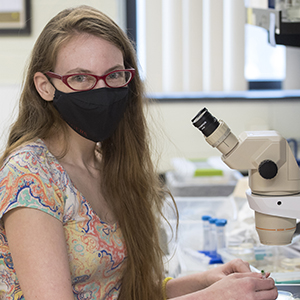 Nevertheless, science doesn’t work according to shifts, and there are days when the schedule has to be ripped up and revised. And while Driscoll holds regular remote meetings to discuss research, she says in-person contact is far superior.

“The spontaneous interactions, the bumping into each other — that’s all very important for science communication,” she says. “On Zoom we can still talk about and argue over experiments, but I have to schedule it.”

All told, Driscoll says, the advancement of science will continue to require face-to-face human interaction. And she is breathing a big sigh of relief at the development and distribution of vaccine.

“We realize so much more how just the casual ways we connect are important in actually transmitting information,” she said. “We are coping. But it’s great that there is a sense of an end in sight.” 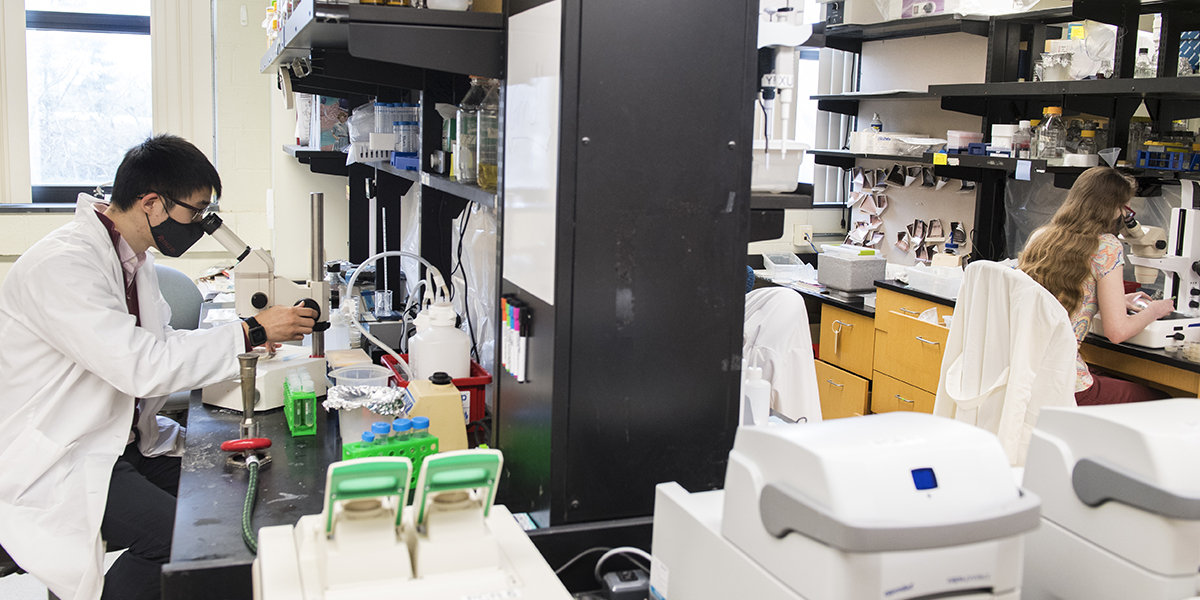