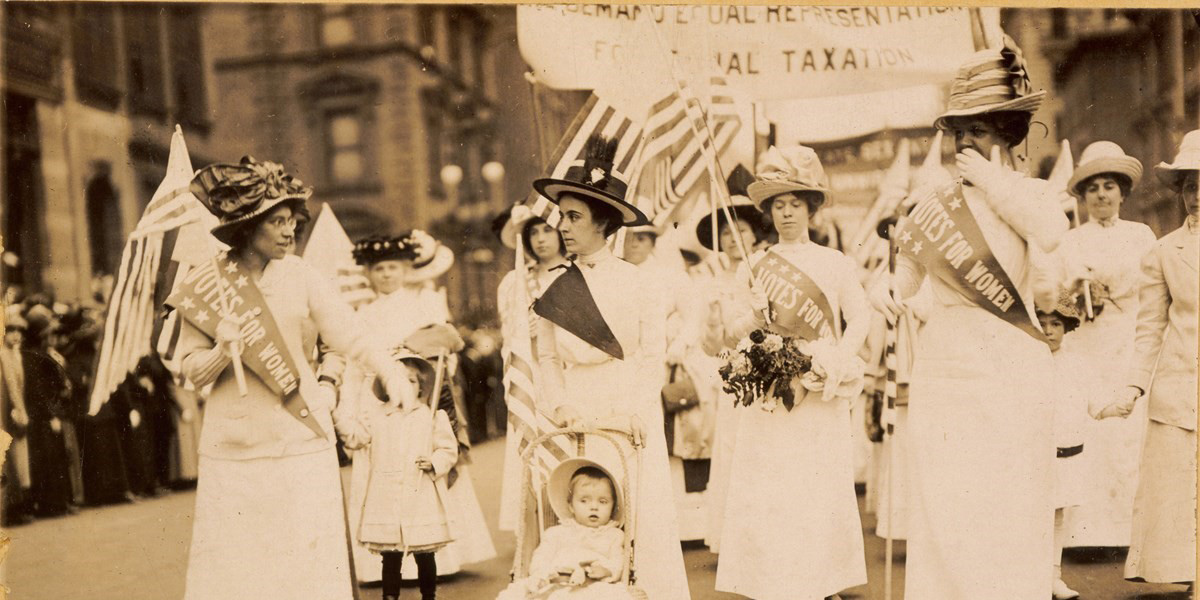 “While we celebrate the 19th amendment we should also celebrate the 1965 Voting Rights Act that made the amendment a reality for millions of black women,” writes Deborah Gray White, Rutgers University Board of Governors Distinguished Professor of History and Women’s, Gender, and Sexuality Studies, “and realize too that when the Supreme Court gutted the key part of this act in 2013, black women’s right to the vote was again put in jeopardy.”

As Professor White, Chair of the Committee on Enslaved and Disenfranchised Populations in Rutgers History which led to the publication of Scarlet and Black: Slavery and Dispossession in Rutgers History, explains, gaining access to the ballot has not been an even or equitable process for American women.

This photo of the 1912 New York Suffrage parade has always intrigued me but I haven’t been able to find a satisfactory explanation of what’s going on. Clearly something is amiss, but most citations ignore the clearly evident tension. Although the black and white picture obscures the racial identity of the woman on the right, the placement of her hand and the glares between the woman with the baby carriage and the woman on the left suggest something has gone awry, something that the second woman from the right is trying to ignore. It would appear that the white women are not at all comfortable with the presence of the black lady or ladies. This interpretation is not a stretch of the facts of the suffrage movement, for white women’s opposition to black female suffrage is well documented.

In 1913 the Chicago Alpha Suffrage club led by Ida B. Wells-Barnett was asked by white women organizers of the Chicago parade to segregate themselves and march in the rear so that both supporters and haters of women’s suffrage would not get the impression that white women favored integration and Negro suffrage. Famously, Wells-Barnett refused to be segregated and entered the parade at its mid-section. More to my point in using this picture as a means to remember this centennial: the nineteenth amendment granted black and white women the vote, but they traveled radically different paths to suffrage.

Indeed, while both groups had to fight for the vote, black women had to struggle against black and white men, and white women. We should remember also that while the nineteenth amendment granted the vote to all women, black women in southern states had the vote stripped from them and, like Fannie Lou Hamer who more than sixty years later was beaten and sexually assaulted for attempting to register to vote, risked life, limb and economic deprivation to exercise this basic right. This means that while we celebrate the 19th amendment we should also celebrate the 1965 Voting Rights Act that made the amendment a reality for millions of black women, and realize too that when the Supreme Court gutted the key part of this act in 2013, black women’s right to the vote was again put in jeopardy.

Taking in this reality forces us to recognize that the tension revealed in the above photo is ongoing today. In 2016, black and white women voted radically differently. Black women voted overwhelmingly for Hillary Clinton while a majority of white women voted for Donald Trump. Just as black and white women traveled different paths to suffrage they still traverse different paths today. So while we celebrate the centennial of the passage of the 19th Amendment let us remember that while all women got the vote in 1920, not all women were immediately allowed to vote, not all used the vote the same way, and not all used it to further the interests of all women.