The Current Gender Gap in Voting in 2019 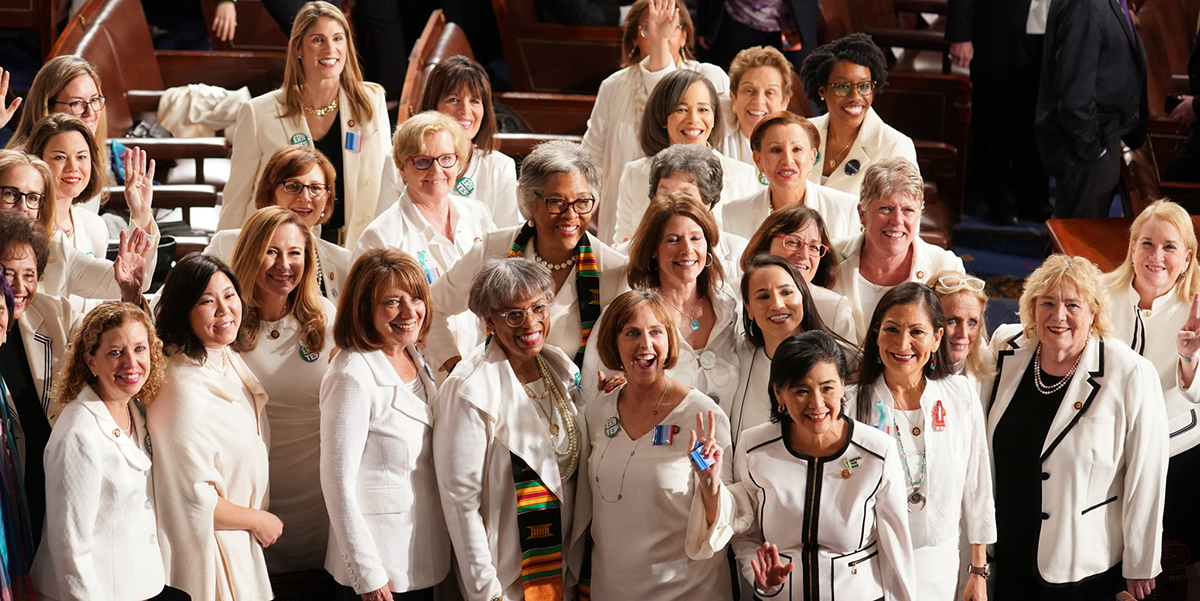 “In the 2016 election 9.9 million more women than men voted. As the female proportion of the electorate has grown, women have also begun to diverge from men in their voting choices,” says Susan Carroll, Professor in the Departments of Political Science and Women’s, Gender, and Sexuality Studies, and Senior Scholar, Center for American Women and Politics, Eagleton Institute of Politics.

Carroll has spent her career examining the impact of women holding office on American politics, most recently in A Seat at the Table: Congresswomen’s Perspectives on Why Their Presence Matters with Rutgers scholars Kelly Dittmar and Kira Sanbonmatsu, analyzing interviews of over three-quarters of the women serving in the 114th Congress (2015-17).

Over the course of the several decades that it took to win the right to vote, suffragists used a variety of arguments to win support from different segments of the all-male electorate and political establishment. 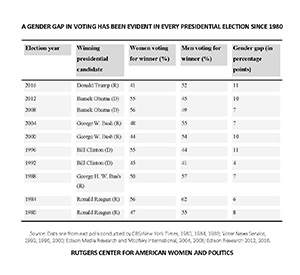 Some justice-based approaches stressed fundamental similarities between women and men, arguing, for example, that women, like men, were created equal and had an inalienable right to political equality and thus the vote. Other difference-based arguments claimed that women’s experiences, especially as mothers and caregivers, gave them values and perspectives that would lead to political choices that diverged from those of men. Suffragists claimed that women would use their votes to promote peace, clean up government, ban the sale of liquor, and bring justice to a corrupt world.

Contrary to these arguments that women’s suffrage would lead to social change, women voted in much lower numbers than men in the elections immediately following women’s enfranchisement in 1920, and there were few indications that women were voting differently than men or using their votes to express a distinctive perspective. Suffragists did not foresee that other major changes in society and women’s perceptions of themselves would need to take place before a “gender gap” in voting would be evident.

Nevertheless, over time the voting rates of women and men converged, and in recent decades women’s voter turnout has actually exceeded that of men. Women outvoted men in sheer numbers for the first time in the 1964 presidential election, and women have surpassed men in their rate of voter turnout since 1980. In the 2016 election 9.9 million more women than men voted, and women’s voter turnout rate was 4 percentage points higher than men’s (see Gender Differences graph).

As the female proportion of the electorate has grown, women have also begun to diverge from men in their voting choices. In every presidential el

ection since 1980, differences have been apparent in the proportions of women and men who voted for the winning candidate, ranging from a low of four percentage points in 1992 to a high of eleven percentage points in both 2016 and 1996, with women more likely than men to support the Democratic candidate (see Gender Gap table). Polls also show women are more likely than men to identify with the Democratic party and in the current context, to disapprove of Donald Trump’s performance as president.

In a sense, then, a century after women’s enfranchisement, the women’s vote promised by the suffragists has finally arrived and has been influencing the dynamics of elections for almost four decades--although with underlying issues and dynamics quite different from those anticipated during the suffrage era.