Coalitions Create Change: Influence of Haudenosaunee and others on Suffrage Movement 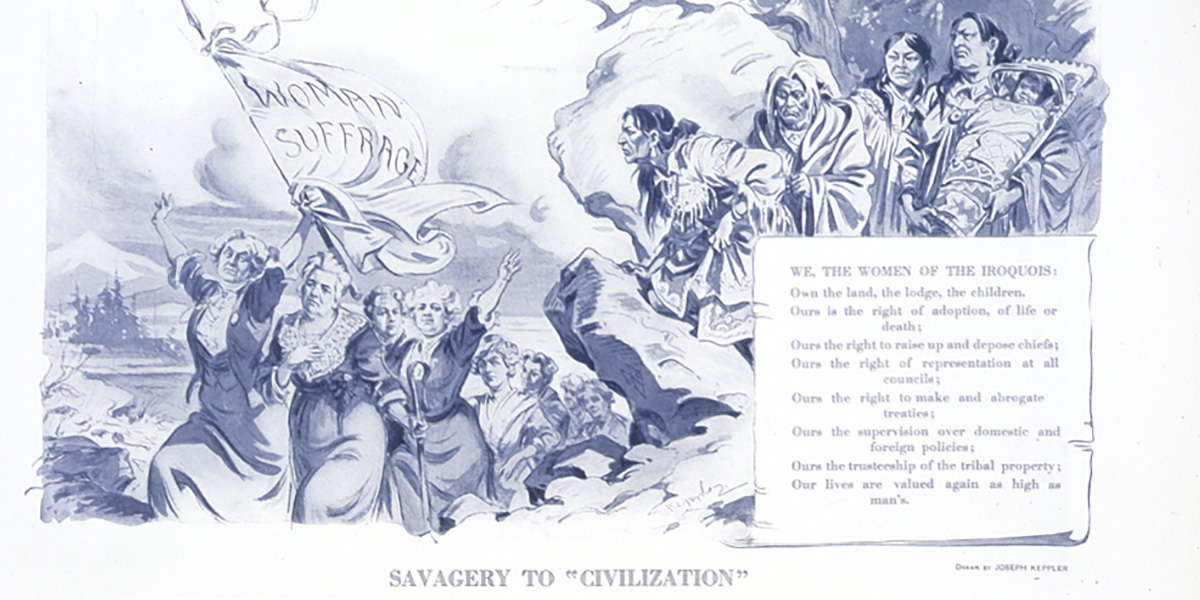 “Revolutions are not won only by iconic heroines alone, they are won by hard-earned, often fractious coalitions,” writes Rebecca Mark, Director, Institute for Women’s Leadership, and Professor, Department of Women’s, Gender, and Sexuality Studies. “As we celebrate the centennial of women’s voting rights, we should remember the contributions of many diverse women.”

For Independence Day, Mark reflects on the nearly forgotten contributions of the many women and coalitions that contributed to the movement.

The Susan B. Anthony, Elizabeth Cady Stanton, Alice Paul version of suffrage history is just part of the story. As we celebrate the centennial of women’s voting rights, we should remember the contributions of many diverse women.

The concept of Onkwehonwe-neha connecting spirituality, government, and child-bearing, should become part of our understanding of the world. The names of the Haudenosaunee women who taught our foremothers should be spoken beside the names of iconic suffragists.

For black suffragists Ida B.Wells, Mary Church Terrell, Adella Hunt Logan, Charlotte Forten Grimké and the National Association of Colored Women the passage of the 19th amendment was not a victory. It was instead a rallying cry to continue the struggle, only partially rectified by the passage of the 1965 Voting Rights Act. Black people are still fighting to vote without violent retaliation and suppression.

Women who love women are hidden in plain sight throughout the history of the suffrage movement. Susan B. Anthony and Emily Gross were lovers. Life-long partners, Jane Addams and Mary Rozet Smith, Anna Howard Shaw and Lucy Elmina Anthony were in the forefront of the movement.

Suffragists fought not just for the vote but for women’s right to control their earnings, own property, divorce their husbands, and take custody of their children. They advocated for better schools, the regulation of child labor, and the right to join trade unions.

Revolutions are not won by iconic heroines alone; they are won by hard-earned, often fractious, coalitions. The Haudenosaunee women who made it possible for early suffragists to imagine equity for women did not become eligible to vote in the nation that had stolen their land and killed their loved ones until 1924.