What Did Ratification of the 19th Amendment Mean to Women? 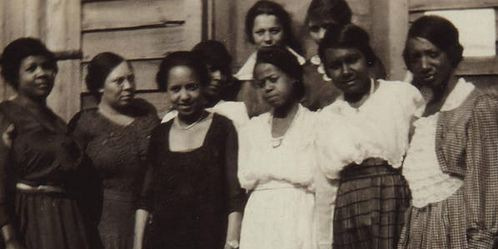 “Ratified on August 26, 1920, the Amendment declared that states could not deny women the right to vote based on sex and added the largest number of voters to the electorate of any measure in American history,” writes Nancy Hewitt, Distinguished Professor Emerita History and Women's, Gender, and Sexuality Studies. “The Nineteenth Amendment inspired millions of women to vote. But its promise of first class citizenship only came to fruition after myriad battles over many decades, some of which continue today.”

Hewitt’s research explores women's activism, including women's suffrage, in the nineteenth and twentieth centuries. By highlighting specific communities, including Rochester, New York and Tampa, Florida, she examines the ways that race, class, ethnicity, and religious affiliation shape the causes and strategies women embrace to transform their lives and the larger society.

For the 100th anniversary of ratification, Hewitt writes:

This photograph commemorates the day that nine Black faculty members at Virginia State University voted in the 1920 election. It illustrates both the possibilities and limits of the Nineteenth Amendment. Ratified on August 26, 1920, the Amendment declared that states could not deny women the right to vote based on sex and added the largest number of voters to the electorate of any measure in American history. However southern Black women, like men, were quickly disfranchised as were many Mexican-American women in western states. Other groups, including most American Indian and Chinese-American women, were excluded because they had not yet been granted citizenship. Women in the U.S. colonial possessions of Puerto Rico and the Philippines were also excluded from the Amendment’s benefits.

While millions of women remained disfranchised after 1920, southern Black women had one chance to vote and they grabbed it. It was state Supreme Courts that provided Black women the opportunity. In states across the South, judges ruled that there was not sufficient time between the August 26 ratification and the November 3 election to impose poll taxes, literacy tests and other efforts to suppress the vote on newly-enfranchised women. Thus all women in the South would be allowed to register and vote that fall simply by meeting residential and age requirements. African American women were well organized via suffrage organizations, women’s clubs, churches, and black colleges, and they used these organizations to get out the vote. I first realized that southern Black women voted in 1920 while teaching at the University of South Florida in Tampa in the early 1980s. The city’s white-owned newspapers had long opposed women’s enfranchisement and Florida refused to ratify the Nineteenth Amendment. Still, editors begged white women to go to the polls in fall 1920 because they feared that the outpouring of Black women could change the outcome of local elections.

Whatever the local circumstances, African American women cast ballots across the South. Fortunately the ten well-dressed women from Virginia State University were photographed on Election Day, providing visual testimony of their enthusiastic embrace of the ballot. In Richmond, more than 2400 Black women voted that November as did their sisters in Norfolk and other Virginia cities as well as Tuskegee, Alabama; Galveston and Houston, Texas; Memphis, Tennessee; and dozens of other southern cities. This evidence attests to the strong political infrastructure and the passion for enfranchisement that mobilized Black women between August 26 and November 3, and despite threats of violence.

Southern white authorities quickly closed the loophole that the Nineteenth Amendment had opened, but only after thousands of southern Black women experienced the power and joy of casting ballots. That feeling propelled some Black southern women into work with the Republican and later the Democratic Party, with all-female and mixed-sex civil rights organizations, and with innovative groups like the Mississippi Freedom Democratic Party. Their critical contributions to these efforts and their pivotal role in recent elections are well documented. Mexican-American, Puerto Rican, Filipina, Chinese American, and American Indian women also renewed campaigns for suffrage after 1920, with varied success. Clearly, ratification of the Nineteenth Amendment inspired millions of women to vote. But its promise of first class citizenship only came to fruition after myriad battles over many decades, some of which continue today.