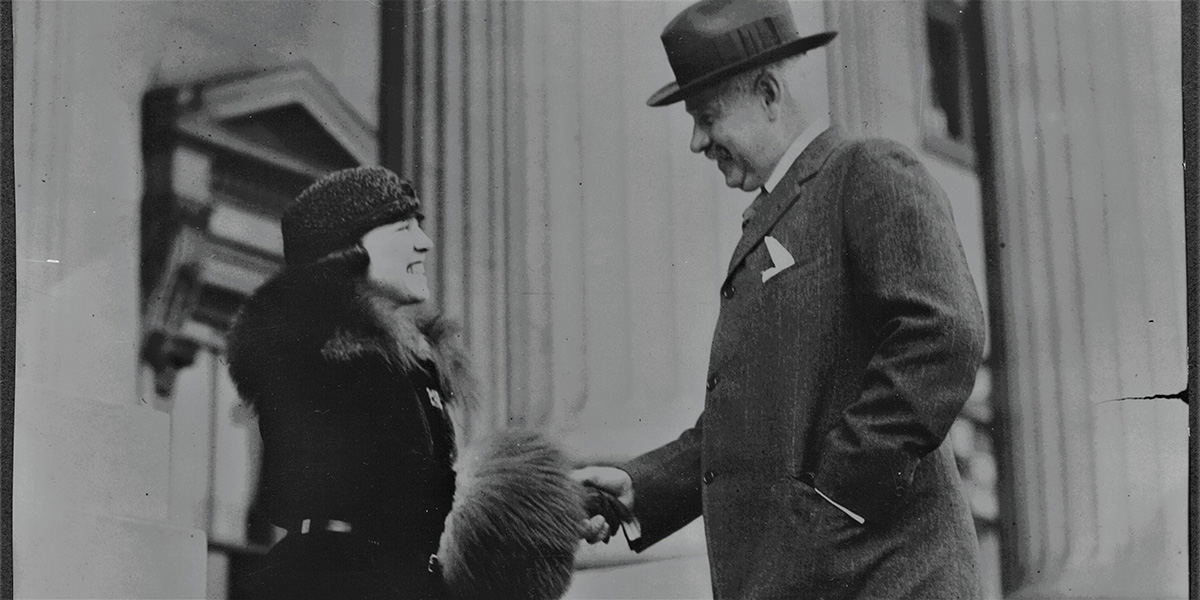 “In 1920, suffrage was not a foregone conclusion for women anywhere in the United States, and it was a hard battle for New Jersey advocates, even as the birthplace of Alice Paul, renowned suffragist and Chairman of the National Woman’s Party,” writes Dr. Kristin O’Brassill-Kulfan, Coordinator and Instructor of Public History, Rutgers History Department. The author of Vagrants and Vagabonds Poverty and Mobility in the Early American Republic, O’Brassill-Kulfan, a public historian who runs the public history program at Rutgers University, reflects on the ratification of the nineteenth amendment in New Jersey and the work of the New Jersey suffragists.

One the 100th anniversary of New Jersey's ratification of the 19th amendment, O’Brassill-Kulfan writes:

One hundred years ago today, New Jersey was the 29th state in the union to ratify the Nineteenth Amendment to the U.S. Constitution, granting suffrage to most white women in the nation, when its state legislature voted in favor of women’s voting rights on February 9, 1920. New Jersey’s history with women’s suffrage was complex—it was briefly the only state not to preclude women from voting on account of sex in 1776.

In 1915, along with New York and Pennsylvania, New Jersey’s male electorate defeated a referendum offering suffrage to women by a resounding 51,108 votes. So, in 1920, suffrage was not a foregone conclusion for women anywhere in the United States, and it was a hard battle for New Jersey advocates, even as the birthplace of Alice Paul, Chairman of the National Woman’s Party.” 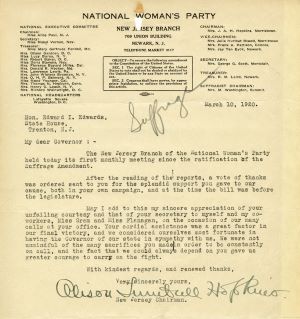 In January 1920, members of the National Woman’s Party’s New Jersey Branch made countless visits to the offices of the state’s legislators and to the State House itself. While the suffrage movement had been spearheaded and carried out on the ground by women for decades, in order to win legislative change, advocates needed the support of male voters and policymakers. This was no easy feat, with numerous parties and anti-suffrage coalitions opposing them at every turn. Alison Turnbull Hopkins, Chairman of the New Jersey Branch, reported that she and party organizer Betty Gram (pictured here receiving a congratulatory handshake from New Jersey Congressman Joseph S. Frelinghuysen in Trenton after the ratification vote) frequently visited the governor’s office to build sympathy with Governor Edward I. Edwards, where they found support that lent them “greater courage to carry on the fight.”

When the legislature passed the so-called “Susan B. Anthony” amendment that February, newspapers across the state reported that the state’s suffragists were, in the words of New Brunswick’s Daily Home News, “jubilant” and eager to “rush” a signed copy of the state’s resolution to Washington, D.C. 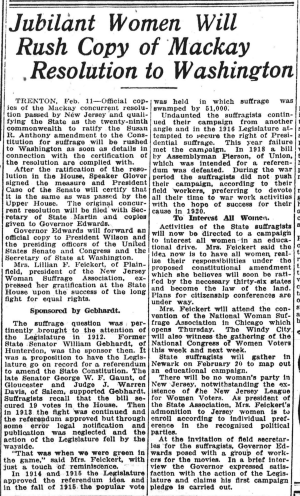 Local activist and President of the New Jersey Woman Suffrage Association, Lillian F. Feickert of Plainfield, NJ, voiced confidence that the state’s positive vote indicated that the subsequent seven state votes needed to meet the 36 state bar for ratification would follow. She was eager to shift gears and begin educating women about “their responsibilities” now that they were gaining full citizenship.

New Jerseys’ suffragists took only a brief moment to celebrate a hard-won victory before regrouping for the fights ahead. New Jersey suffragist Alice Paul continued her advocacy for suffrage nationwide, and after the passage of the Nineteenth Amendment, helped draft and promote the Equal Rights Amendment, which has, nearly a century after its first introduction in 1923, finally been approved in 2020 by the 38th state, Virginia.

Alice Paul’s childhood home, Paulsdale, in Mount Laurel, NJ, is preserved as a National Historical Landmark because of her role in the suffrage movement, and now houses the Alice Paul Institute, which advocates for the preservation of cultural heritage related to women’s history and promotes women’s leadership development. The site is open to the public and tours are available; learn more at their website: https://www.alicepaul.org.