A Rutgers course gets beneath the surface of classic stories 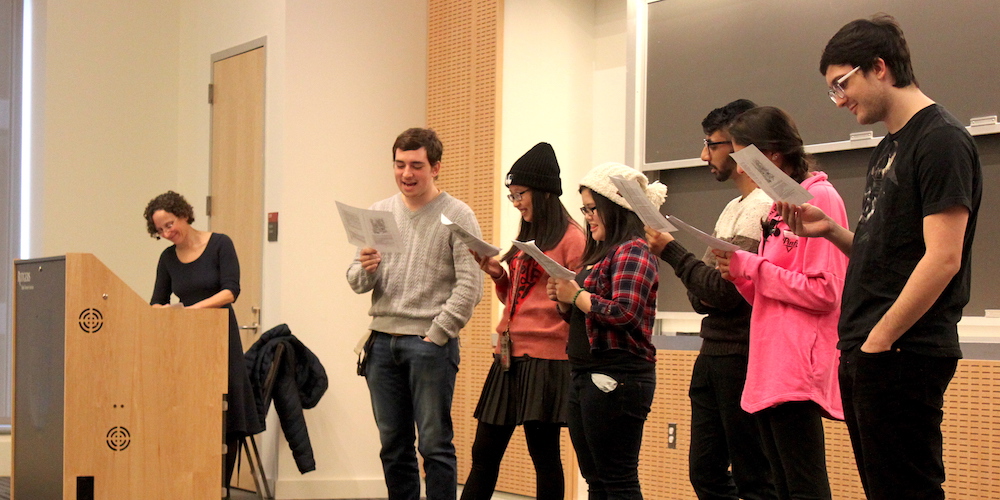 Students in Professor Martha Helfer’s class are reading a tale of lust and danger.

“What does the color ‘red’ make us think of?” Helfer asked several hundred surprised undergraduates gathered in a stadium-style lecture hall in the Rutgers Academic Building.

After a few students gamely offer responses, Helfer spells it out. 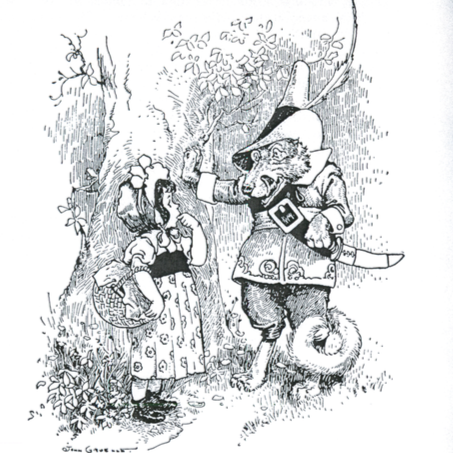 “Blood, fire, and sensuality,” she says.  “That’s all coded right into the title of our fairy tale!”

Welcome to “Fairy Tales Then and Now,” an acclaimed humanities course in the School of Arts and Sciences that has students from across the academic spectrum digging deeply into centuries-old stories and discovering some surprising insights. Students analyze storylines, trace the transformation from oral tradition to literature to film, and explore the enormous impact fairy tales have had on our collective psyche.

“This course is about fairy tales but it’s about much more than fairy tales,” says Helfer, a German studies scholar. “This course is going to challenge how you have been taught to think, and challenge you to think in new and possibly uncomfortable ways.”

Indeed, in the opening lecture, the timeless tale of Little Red, her grandmother, and the wolf that gobbled them up becomes something far more dark and complex than students remember—especially compared with contemporary treatments in children’s films and storybooks.

Consider, Helfer says, the Brothers Grimm version, known as Little Red Cap, in which the wolf asks the young girl what she’s carrying—identical in German to the verb for wearing—under her apron. After the wolf devours Little Red and her grandmother, he is described as an “old sinner” who “satisfied his desires.”

“So now we have this notion of a religious transgression that has taken place," says Helfer, a professor in the Department of German, Russian, and East European Languages and Literatures. “Why did you not notice the religious overtones and the overt sexuality? Perhaps it’s because of the way you have been trained to think; or not to think.”

In the end, after Little Red is symbolically reborn chaste and pure from the wolf’s belly, the moral of the story is clear.

“Stay within these cultural norms, which are teaching little girls not to be curious, not to stray from the path, and not to be sexual beings,” Helfer says. 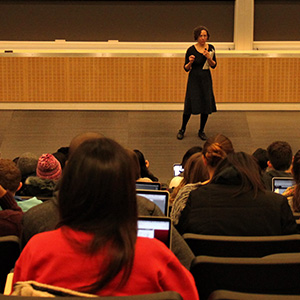 Students say they’re impressed by Helfer’s ability to dig beneath the surface and bring out new meanings.

“This is one of the most interesting classes I’ve taken,” says physics major Jesús Rodríguez.  “It’s eye-opening. You wouldn't expect there to be a cultural agenda in fairy tales.”

The class examines fairy tales from cultural, political, and psychological perspectives. Students learn how fairy tales can be easily abused, such as in Nazi Germany when Little Red Riding Hood symbolized the German people, and the wolf represented Jews. The huntsman who saved the day was Hitler.

Helfer also has them study Walt Disney’s film treatments of fairy tales, showing the 1937 version of Snow White and the Seven Dwarfs and requiring students to watch several others. Although the Disney works have been criticized for being shallow and superficial, Helfer told the class to bear in mind that there’s no single version of any fairy tale that can be held up as authoritative.

“Rather than trash the Disney films or bemoan what they’ve done to change the Grimm tales, why not just embrace Disney as an object of study worthy of analysis?” she says. “The films may be traditional and vaguely anti-intellectual, but there are surprises and challenges to the Disney ideology even within the films themselves.”

Whether they’re poring over the works of the Brothers Grimm and Hans Christian Andersen, watching Disney films, or reading Art Spiegelman’s Maus, students are required to think deeply about the material and express their understanding in several papers throughout the course, including an eight-to-10 page essay. Helfer reminded them that no matter what they end up doing for a living, they’ll need to think critically, analyze with precision, and communicate their findings in writing.

“If you think you can’t write, you are absolutely wrong about that,” Helfer says. “Trust yourself.  You have something to say.”

Dayna Gallucci, also a physics major, said she took the course in part to focus on her writing.

“I find writing courses a little daunting,” she says. “But the material in this course is so fascinating, fun, and thought-provoking that it makes you want to write.”

The illustration above appeared in "The Complete Fairy Tales of the Brothers Grimm," Bantam, New York, 1987.