Rutgers Students Get a Lasting Lesson in Community Engagement

Mural tour takes students off campus and into New Brunswick

Professor Marcy Schwartz was determined to create a course in which students could learn about social justice and get involved with the Spanish-speaking communities that neighbor Rutgers University–New Brunswick.

So in “Spanish for Community Engagement,” offered for the first time this semester, students explore issues such as housing, health, and education while volunteering in organizations such as the New Brunswick Community Food Alliance, the Eric B. Chandler Health Center, and a mentoring program at Middlesex County College.

“I see so much interest from this generation of students in wanting to do something good,” says Schwartz, chair of the Department of Spanish and Portuguese in the School of Arts and Sciences. “They want to contribute something positive and lasting and make a significant change in the community.”

Cesar Esteban, a first-year student who is still mulling a major, felt compelled to sign up for the course.

“Community service was very important at my high school,” said Esteban, who graduated from the Jesuit-run St. Peter’s Preparatory School in Jersey City. “I saw this course as a great way of continuing that tradition and enhancing it.”

The class recently boarded a bus to examine the murals of New Brunswick—a deep lesson in community aesthetics, and a journey that took them out of the familiar setting of College Avenue and George Street and into neighborhoods such as Unity Square and Jersey Avenue, and beneath the Route 18 corridor along the Raritan River.

“I thought I was a New Brunswick expert, but I have been to a lot of places today that I’ve never seen,” said Sarah Schrading, a senior majoring in linguistics and Spanish, with a minor in political science. 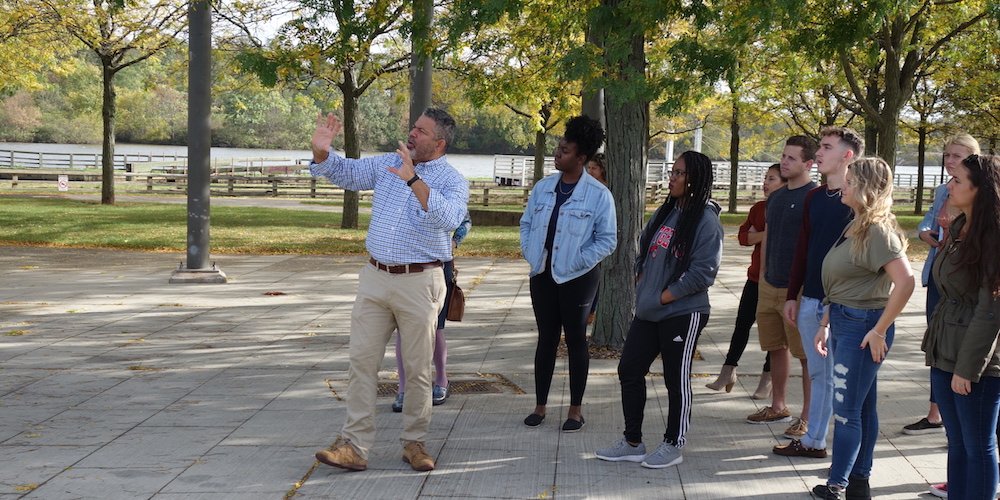 Leading the tour and providing the background on the murals was Claudio Mir, a senior program coordinator for the university’s Collaborative Center for Community-Based Research and Service.

“Murals represent something as old as the presence of humans on this planet,” said Mir, who studied experimental video and filmmaking as a Rutgers student in the 1990s. “It’s that desire to be noticed. It’s the same impulse that makes us take selfies.”

In New Brunswick, Mir said, murals sometimes serve pragmatic purposes, such as covering up and discouraging graffiti. But these murals also tell a larger story about immigrant communities, some of which have been displaced through cycles of real estate development and gentrification.

Mir showed students the full range of mural art in New Brunswick, from the wildly imaginative paintings along Route 18, to the communal meal lovingly rendered on the side of a restaurant near downtown, to the restored mural of the Rev. Martin Luther King and Coretta Scott King on Sanford Street.

Each one subtly reflects social, communal, and political ideas, he said.

The focal point of the mural along the Route 18 river walk, for example, is a masked woman with her lower body starting to come apart. The mural is the work of Albus Cavus, a collective of artists dedicated to transforming public spaces.

“She seems like an alien kind of figure, losing her personhood,” Mir said. “Perhaps it’s a statement on the way our society treats undocumented immigrants.”

The mural depicting people gathering around a table for a meal adds a joyful welcoming spirit, he said. The mural was painted by a Rutgers alumna Ingrid Morales.

“It’s like an open window and anybody could be sitting at the table,” Mir said. “It creates such a beautiful space.”

Students were impressed by the murals and said the course was helping them move beyond their Rutgers-centric routines and develop a wider lens with which to see the world. Schwartz has students reading research reports and studying the work of NGOs, immigrant rights groups, and the World Health Organization. Meanwhile, each student has to volunteer in a community organization.

The Collaborative Center, where Mir serves as a program coordinator, worked with the Spanish and Portuguese department  to place students in community organizations and provide orientation and guidance throughout the semester.

Senior Rachel Johnson volunteers at the New Brunswick Community Food Alliance to meet the course requirements. She staffs a table at the farmer’s market where she speaks in Spanish with residents, informing them about the alliance’s programs.

“We learn in a very practical manner in this course,” Johnson says. “I like going into the different parts of the city and participating in this communities while continuing to get the academic and intellectual background.”

The tour ended fittingly at Gaby’s, a Mexican bakery and restaurant, where students ate sweet rolls and coffee and reflected on the art they had seen and its connection to the larger community.

“This reinforces the fact that New Brunswick is bigger than Rutgers,” Schrading said. “And it is important that we remember that.”