Rutgers Professor Brings Insights on Islam to the Big Ten 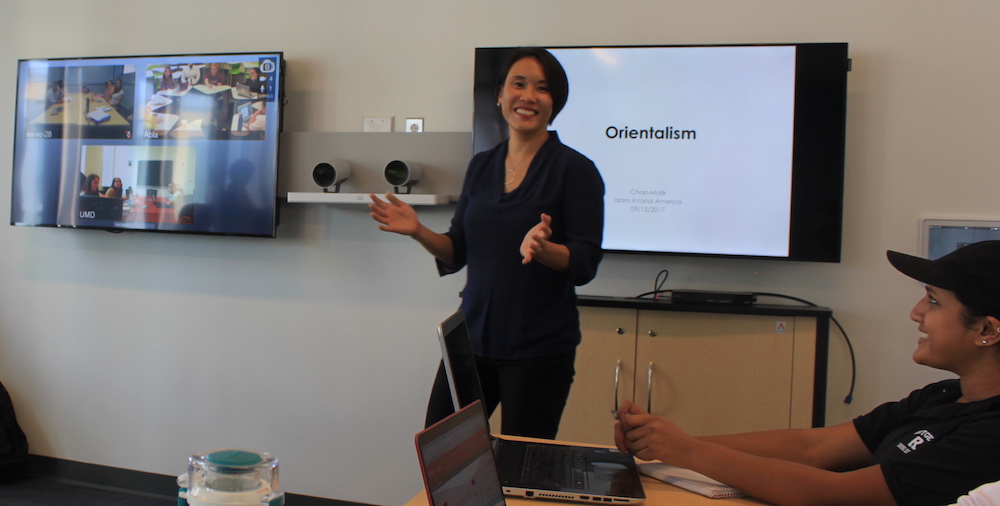 Students in Sylvia Chan-Malik’s “Islam in/and America” course are often surprised to learn that some of the earliest Muslim communities in the United States were African American.

“They have to rethink the whole notion of Islam as a foreign religion from the East,” says Chan-Malik, a professor in the American Studies and Women’s and Gender Studies departments in the School of Arts and Sciences.  “If you met a Muslim in the United States prior to the 1960s, they were probably African American.”

Chan-Malik is bringing those insights to three other major research universities this semester as part of an Islamic studies initiative that aims to reach schools across the Big Ten Academic Alliance.

“It’s a pretty revolutionary experience to have this kind of discourse with people from around the country,” says Sukhvir Singh, a Rutgers sophomore. “It’s powerful.”

During one session Chan-Malik had students list all the stereotypes they have heard about Muslims. She switched the sound off so that the groups from each school could work independently, and then compared what turned out to be very similar lists that included terrorism, oppressing women, and opposing democracy.

“Muslims in the United States have had to contend with the fact that their religion and their way of life are seen through certain representations and stereotypes,” Chan-Malik said. “And these do not account for the complexity and diversity and multiplicity of their actual lives.”

The course was made available to the other schools through the Digital Islamic Studies Curriculum (DISC), an initiative by the University of Michigan to build a community of scholars across the Big Ten while providing students with access to a broad array of courses on Islamic cultures, ideologies, and historic traditions. The initiative has received support from the Andrew W. Mellon Foundation.

Chan-Malik is not the only Rutgers professor to participate. Ousseina D. Alidou, a professor in the Department of African, Middle Eastern, and South Asian Languages and Literatures, is teaching her "Islam in African Literature" course to her students at Rutgers and at the University of Michigan.

Both Rutgers courses provide students with a focus that they might not encounter in a typical history or religion elective on Islam.

Alidou, for example, explores literature that shows how Islam varies from region to region, reflecting the diversities of African culture.

Chan-Malik’s course, meanwhile, shines a light on Islam’s presence in America, going back to the Africans who were forcibly transported to the United States during the slave trade. She also examines how Islam took root among African Americans in northern cities during the early 20th century. A key text for the class is The Autobiography of Malcolm X. 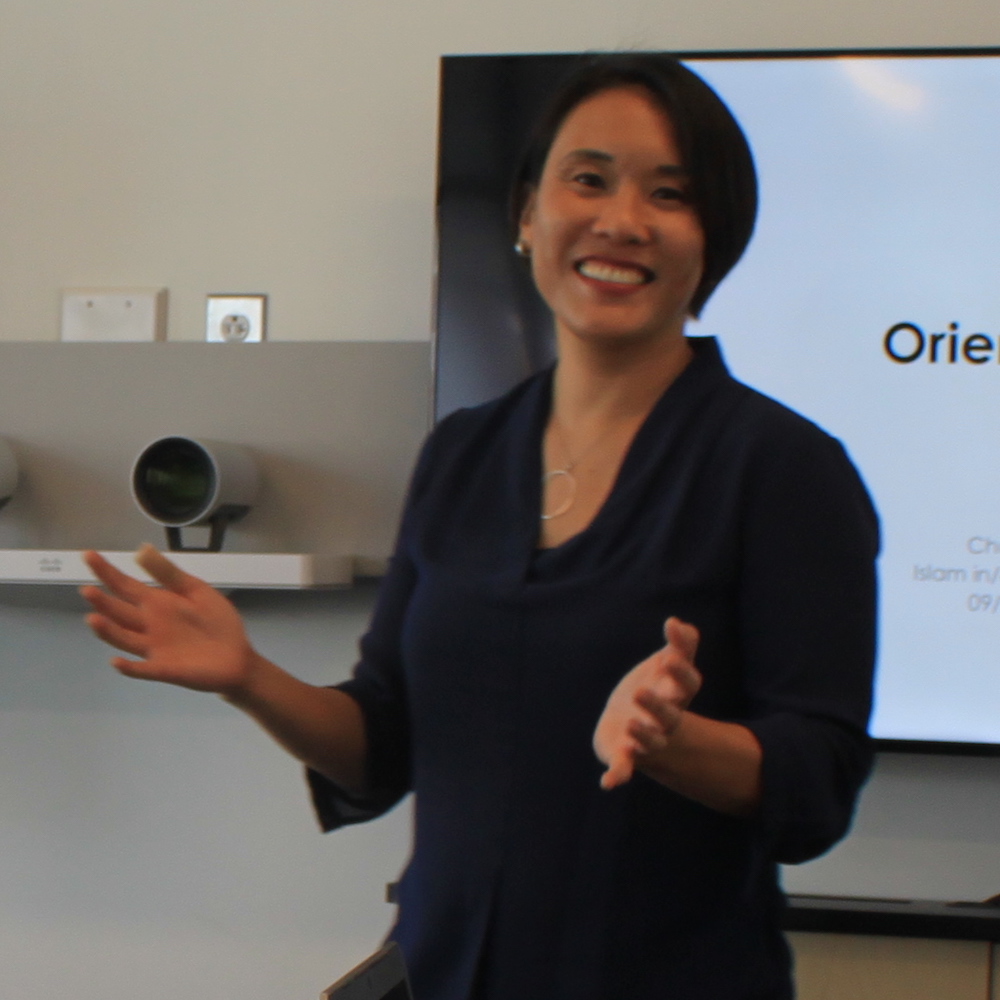 “I come at this topic differently,” says Chan-Malik, whose forthcoming book is titled: Being Muslim: A Cultural History of Women of Color in American Islam. “As a scholar of race and ethnicity, my interest is in how Muslims were constructing their identities as Muslims in a very race-conscious society.”

Chan-Malik had some initial qualms about teaching through video-conferencing. But she said the available technology and the students’ enthusiasm for the topic have made it an engaging experience.

Her classroom in the Rutgers Academic Building is equipped by the SAS Office of Information Technology with sound-seeking cameras that automatically zoom in on the person speaking rather than just providing a static picture. There are microphones installed in the ceiling to better capture the sound as well as a camera at the back to provide a view of the entire room

And as part of the DISC initiative, Malik-Chan travels to the other universities where she meets the students and holds class from those locations. Students at the schools in Nebraska and Michigan were thrilled to discover the local connection to Malcolm X, who was born in Omaha and grew up in Lansing.

Meanwhile, students at Rutgers—Muslim and non-Muslim alike—say the course has been compelling and is helping them negotiate a globalized world with sophistication and sensitivity.

Diyaa Capil, a sophomore who grew up Muslim in New Jersey as the daughter of Indian immigrants, said she has long felt confused about her identity.

“Especially after 9/11, there are people who automatically assume that Muslims are foreign or exotic and hate America,” she said. “But for my family, the idea of the American Dream has been core.”

Capil, who is double majoring in business analytics and political science, with a minor in American studies, says she has taken several courses with Chan-Malik, citing her ability to unpack delicate issues of race and religion.

“I think this class has really given me context to work through a very long and complicated history,” she said. “It gets right down to the roots of how these sentiments have built up over time.”

Singh, meanwhile, is double majoring in cultural anthropology and American studies with the goal of going to law school.

“A lot of my friends are Muslim and I just want to be able to have a discussion with them as an informed individual and as a friend,” he said. “The content in this course, and the opportunity to hear from people from different regions help me forge my own thoughts about what’s going on in the geopolitical sphere.” 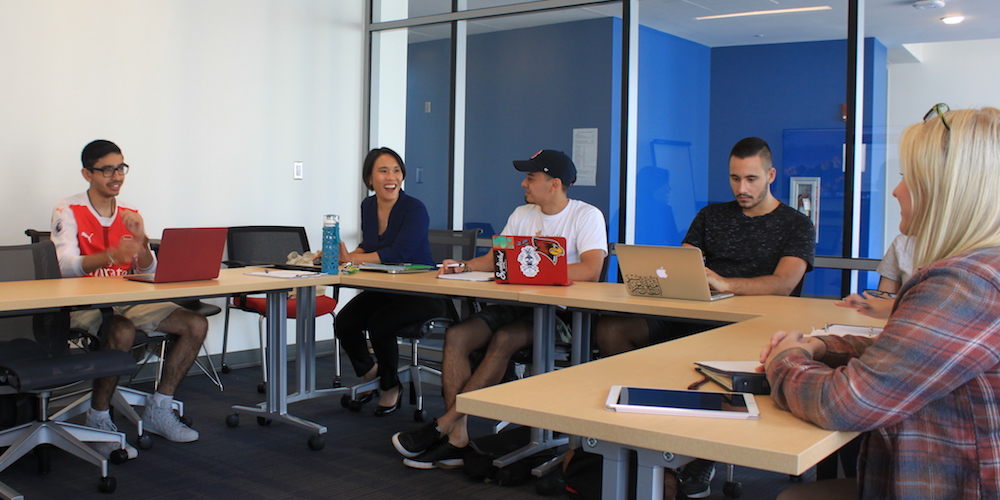