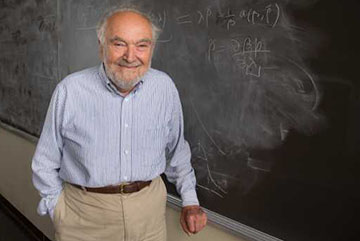 When Rutgers professor and Auschwitz survivor Joel L. Lebowitz delivered a lecture at an international conference in Berlin some years ago, he harked back to the Nazi era and told the audience that as scientists they have a special responsibility “to be in the vanguard of those speaking out and acting for freedom, truth, tolerance, and equality.”

On October 14, 2014, Lebowitz, George William Hill Professor of Mathematics and Physics in the School of Arts and Sciences, received one of the most prestigious prizes of his long, distinguished career: the "Grande Médaille" from the French Academy of Sciences.

In an interview just prior to leaving for Paris, this humble scholar made it clear that he's still working in the “vanguard” that he spoke of in Berlin. For Lebowitz’s accomplishments in the field of statistical mathematics are matched by his work as an advocate for oppressed scientists around the world. Working with the Committee of Concerned Scientists and other organizations, he has strived to protect the human rights and gain the freedom of scientists from around the world including that of Andrei Sakharov, and has traveled to places such as the former Soviet Union, China, and the West Bank to show his support for oppressed scientists.

At 84, Lebowitz continues working full-steam as a scholar and an advocate. In the interview below, he reflects back on his life and career, lacing even painful moments with gently humorous anecdotes.

“It’s by choice,” he says of his sense of humor. “What’s the alternative?”

Q: Your field is mathematical physics, but is it true that earlier in your life you were interested in Jewish religious studies and attended a rabbinical school?

A: In the small town where I grew up, which at the time was part of Czechoslovakia, most of the Jewish population was Orthodox. My father had a textile store, but he had studied rabbinical subjects, and I had a great grandfather and several uncles who were rabbis. I went to a Jewish heder, from the age of three to 13, and in 1943 I went to a yeshiva. Would I have gone on to study rabbinical subjects? Maybe run a textile store? Who knows? In 1944, I went to a concentration camp, and when I was liberated by the British in May of 1945, everything was very different.

Q: You were 14 when you were taken to Auschwitz. How did you survive?

A: Luck. And I suppose a healthy constitution. My mother, when we arrived, was taken to a separate part for children and vulnerable people, and taken to the gas chambers immediately. But my father and I stayed together. I lied about my age and said I was 15 instead of 14 because I wanted to be with my father. He survived for about four months. They had what was called ‘selections.’ They selected people who seemed to be weak and sent them to the gas chambers. He was one of those.

Q: What happened after the war? How did you get to America?

A: That’s a long story too. But at one point I was on a bus going to Holland to learn the diamond trade, with the plan to go to Israel. But at the border, the authorities knew we weren’t the Dutch refugees that we were pretending to be. They showed a picture of a lady and nobody knew who she was. She turned out to be the Queen of Holland! Eventually I came to the U.S. in a program headed by Eleanor Roosevelt for children orphaned by the war. After I came here, I went to a yeshiva in Williamsburg (Brooklyn) where I also did my high school studies. In 1948 I started at Brooklyn College, working my way through school to get my bachelor’s degree.

Q: What made you decide to pursue math and physics?

A: I guess mostly I found it interesting and I enjoyed it. The alternative was engineering. One of my teachers at Brooklyn College had some words of wisdom at the time: She didn’t think I’d be very successful chasing down a leak in a vacuum system, but that I was much-better suited to chasing down a factor of two! In other words, I was not good enough with my hands. So I opted to become a theorist.

Q: Can you explain in lay terms your own specialty in statistical mechanics?

A: It tries to explain the connection between the movement and dynamics of microscopic particles and the macroscopic objects that we observe. Why do the tires on your car get hot after you drive? Why does water boil at a different temperature on top of a mountain than it does here? Why is it that you can hold one end of a wooden spoon in your hands while the other end is in a flame, but you cannot do that with a silver one?

Q: Does this knowledge help you understand or explain the universe?

A: In a sense. It can explain day to day things. It also explains, or at least tries to explain phenomena which might take place in the stars; stars getting collected into galaxies, and galaxies into super galaxies. It’s the search for knowledge that really drew me. I liked math, and I liked theoretical science. I liked trying to understand things.

Q: You’ve been involved for years in advocacy efforts on behalf of scientists living in oppressive regimes, including, most famously, the former Soviet Union. In the post-Soviet era, what are some of the countries that you and your colleagues in the Committee of Concerned Scientists have been concerned about?

A: Well, right now actually, it’s the United States! We’re concerned that the government, the Department of Energy (DOE) specifically, is restricting visits from Russian scientists to labs run by DOE, and visits by scientists in those labs to Russian labs, even when there are no security issues. There are plenty of terrible things Russia is doing, but such actions are not going to have any effect. Not long ago we objected to Russia for punishing a Russian scientist for participating in a conference in the United States. In terms of other countries, there is China, Iran, Turkey, among others.

In general the Committee of Concerned Scientists is a small organization so we try to limit our work to the human rights of academics, scientists, and medical doctors. For example, we wrote to the current Egyptian president objecting to the detention of Khaled al-Quzzaz, an engineer and educator, who was foreign relations secretary to former Egyptian President Mohamed Morsi.

Q: You are 84, and continue to serve as editor-in-chief of the Journal of Statistical Physics, and recently organized your 111th Statistical Mechanics Conference. How do you stay energized and inspired?