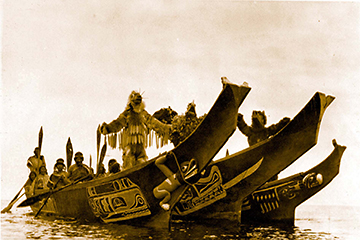 It was an epic tale of love and war - a film poised to mesmerize the American public.

But In the Land of the Head Hunters, the 1914 feature by legendary photographer Edward Curtis, and the first major motion picture with an exclusively Native American cast, was a box office bust.

The critically-acclaimed silent film was subsequently lost for decades before being discovered in a dumpster, turned over to The Field Museum of Natural History in the 1940s, and eventually resurfacing as a documentary in the 1970s.

Through all the twists and turns, ‘Head Hunters’ has achieved an almost mythical status among historians, collectors, and film buffs, as well as among the Kwakwaka’wakw of British Columbia who participated as cast and crew in its production.

Now, thanks to Rutgers professor Brad Evans, and his colleague, anthropologist Aaron Glass, of the Bard Graduate Center, working in cooperation with the U’mista Cultural Society, audiences in 2014 can experience the film as Curtis had envisioned it for moviegoers in 1914.

The 70-minute drama, starring non-professional Kwakwaka’wakw actors, and featuring spectacular costumes, dances, and battle scenes, has been restored. A book of critical essays edited by Evans and Glass has been published, and a dvd of the film will also be available.

The movie was shown at Rutgers at the 2014 New Jersey Film Festival.

“It’s as close to the 1914 version as possible,” says Evans, a professor of English in the School of Arts and Sciences.

Evans and Glass led a collaborative team that restored missing footage and badly damaged reels, integrated the original inter-titles, and 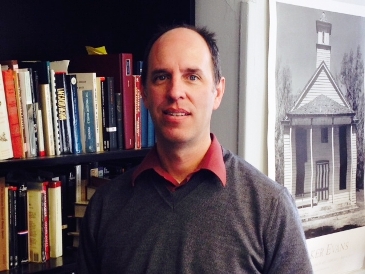 employed contemporary musicians to recreate the haunting orchestral soundtrack composed by John J. Braham, best known for his work with Gilbert and Sullivan. The musical score is the earliest known to be in existence for a silent feature film.

The story, which takes place before the arrival of European settlers, centers on a love triangle, a series of aboriginal battles, and a sampling of Kwakwaka’wakw ceremonial performances.

For Evans, the restored movie is an essential piece of cinematic history unavailable to mainstream audiences for generations.

“Only a very small percentage of motion pictures from this time period have survived in any form,” Evans said. “That we have this one in such a complete form is a surprise and a treasure.”

But the film, he added, may also prompt a reexamination of the legacy of Edward Curtis, whose extensive work photographing Native American communities is widely acknowledged but also the subject of critical debate.

Curtis, who died in 1952, took over 40,000 photographic images from over 80 tribes. He has been criticized for contrived treatments of his subjects that some say perpetuate the myth of the vanishing race or noble savage. 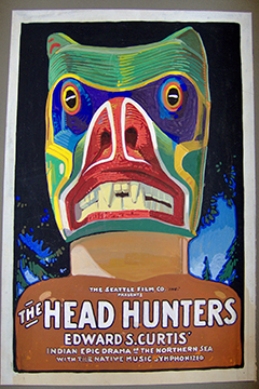 Evans says that In the Land of the Head Hunters might break the critical deadlock and expand the conversation about Curtis. He said the film is revelatory in part for showing the extent to which the Kwakwaka’wakw were involved in the filmmaking enterprise.

“As a cultural historian, I am really interested in the fact that in 1914, an indigenous population is heavily involved in making one of the first really big feature films.” he said. “They weren’t giving an ethnographic documentary performance; they were acting for the movies.

“It renders their relationship with Curtis a much more interesting and complex historical interchange.”

Evans noted, for example, that the tribe performed dances in the film that at the time were outlawed under the Canadian government’s potlatch ban, an effort to force assimilation.

“So in a way it’s an embodiment of cultural knowledge even though it’s under the screen of a feature film,” he said.

Evans first became interested in the film as a graduate student in the 1990s. To restore the 1914 version, Evans and Glass worked with the Getty Research Institute, the UCLA Film & TV Archive, and the U’Mista Cultural Society. Rutgers also supported the project.