Econkids promotes financial literacy with a touch of fun

As families continue to weather the recession and accumulate debt, a project at Rutgers is helping parents introduce their children to the complicated road of money and economics.

For many children, learning and talking about money is about as fun as eating Brussels sprouts, but parents and caregivers should absolutely not avoid the topic, financial experts say. Introducing kids early to concepts like saving, wants vs. needs, and entrepreneurship promotes financial responsibility in children and empowers them to manage their own money. 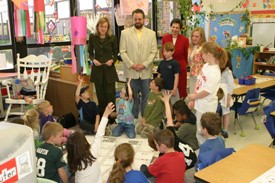 That’s the theory behind the Rutgers University Project on Economics and Children – EconKids, for short – a website that employs children's literature to introduce economic topics to elementary school children and young adults.

The seeds for EconKids were planted several years ago when Yana Rodgers, associate professor of women’s and gender studies in the School of Arts and Sciences, was working as an economics professor at the College of William and Mary in Williamsburg, Virginia.

Given the state of the economy, experts say it is vital for adults to start laying out the foundations of economics to children earlier, rather than later.

During a visit to the local library with her three young children in tow, Rodgers searched for books to teach them about economics. She stumbled upon a bibliography of economic books compiled by Shelby Hawthorne, an elementary school reading specialist.

“I was struck by the economic themes geared toward children my own kids’ ages,” says Rodgers, who began collaborating with Hawthorne on research about children and economics.

Soon, they were getting contacted by children’s publishers, asking if the duo would agree to review their books on the EconKids website.

The site now carries more than 300  reviews of books that cover notions as basic as what money is, where it comes from, and what we do with it to more complex concepts, such as how the economy works and the recession.

The website has been  running for about four years and  usage has been modest – about 1,000 unique visitors per month, Rodgers says. But visitors are spending time exploring it, clicking on an average of five pages and spending nearly three minutes viewing the content. Visitors have come from all over the world, including Africa, Asia and South America.

One of the graduate students writing on a volunteer basis for EconKids says the site breaks the stereotype by taking a fun approach to economics.

“The books we review could be read for enjoyment –   with the child subtly absorbing the economic lessons,” says Jen Fitzgerald, who is pursuing in masters degree in library and information science at Rutgers.

Even teenagers can relate to some of the books reviewed on the site.  For example, The Not-So-Great Depression, by Amy Goldman Koss, and a book-of-the-month selection, was a “fun and sassy read,” says Rodgers, who discussed it with her 14-year-old daughter. The book follows how one family’s income dwindles after their mother loses her high-powered job and they’re forced to make cutbacks.

The book helped Rodgers’ kids understand that shopping after a financial loss requires giving up some pleasure spending and seeking out the discount bin.

“The book explains the concept of budget constraints and making choices,” Rodgers says.

Given the current state of the economy, experts say it is vital for adults to start laying out the foundations of economics to children earlier, rather than later.

A CBS News report in 2007 noted that almost a third of high school seniors and more than three quarters of college freshmen nationally have already accumulated credit card debt.  (This lesson was echoed in a recent CNN video segment that featured the EconKids project).

Financial literacy is something that every citizen needs, explains Catherine Milone, President of Junior Achievement of New Jersey. “It’s so important for children to develop good financial habits as early as possible,” she says.

Junior Achievement of New Jersey has developed a number of ties with Rutgers, including working with Rodgers, who volunteers for the organization and serves on its board.  Most recently, Rutgers and Junior Achievement collaborated in organizing and hosting the New Jersey Financial Literacy Summit attended by nearly 500 educators from around the state.

Barbara O’Neill, a professor and extension specialist in financial resource management at Rutgers University says that it’s an advantage for kids to be exposed to the value of money way before the teenage years hit.

Rodgers, meanwhile, has big ambitions for the EconKids Project. She is trying to attract corporate sponsorship so she can hire a staff person to manage and expand the site, as well as increasing  the number of graduate student writers. She would also like to move beyond a purely online project and offer outreach to the community.

“I could envision a program of school visits by the book authors and illustrators as well as training opportunities for teachers and community leaders,” she said.